HAVANA TIMES, March 16 — For about a month, work has been going on day and night in Santiago de Cuba to fix up and repair those places that will be visited by the Pope.

But the undertaking that has required the most material and humans resources is the construction of a massive open-air chapel at Antonio Maceo Revolution Square.

Working on that project are engineers, architects, planners, builders, welders, electricians, painters and all the police and security personnel needed to patrol the surrounding area.

Catholic symbolism is being erected, with crucifixes and machetes superimposed in such a paradoxical visual context that Christians and revolutionaries seem to have never held any antagonisms. 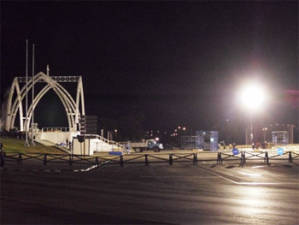 Erecting the stage has meant excessive expenditures of kilowatts, not only for the large amount of welding required for the structure, but also the enormous quantity of halogen light bulbs placed in the front, on the sides and in different positions all around the structure. These are not only to illuminate the nights for the workers, but to offer increased protection to the site once the work is complete.

There are so many the lights that if you dropped a needle on the ground, you’d have no problem finding it. The flip side of this story is that someone has to pay for all of this lavishness, and undoubtedly it’s the people, as it’s always been. 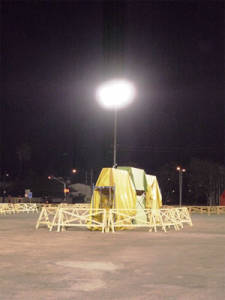 When dawn comes to an already illuminated Revolution Square, throughout the nights rotating electric service cuts have been made in several neighborhoods, with each alternating area blacked out for an hour or so.

In Santiago it’s always hot. So there’s nothing worse than having ones fan or air conditioner stop.

Your sleep is interrupted by the shrill buzz of mosquitos, and your sweating becomes unbearable. You can telephone the electric company’s 108 information line and request an explanation, but the operator will only say — almost automatically — “we’re sorry but we’re in the middle of energy manipulations, but they’ll last for only a few more minutes.”

With all of this, the Pope’s visit has already meant sacrifices on our part. He, the shepherd of good faith, is coming to share his grace and to request spiritual peace for all Cubans. He is coming to bless the virgin but he doesn’t know what that this has to do with energy manipulations and those other “manipulations” of power.

4 thoughts on “The Pope and Manipulations”