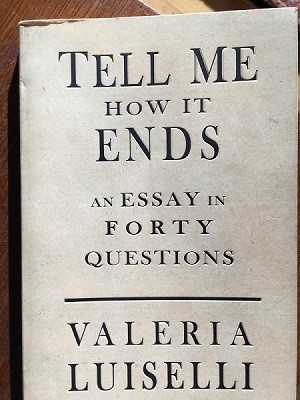 HAVANA TIMES – Tell Me How It Ends: An Essay in Forty Questions is the name of a book by Valeria Luiselli, published by Coffeehouse Press in 2017. The forty questions of the title refer to the intake questionnaire the author uses to interview children from Guatemala, El Salvador, and Honduras who apply for asylum in New York City.

Luiselli is a Mexican novelist, living in New York with her Mexican husband and six-year-old daughter while they wait for permanent residency status. She is a volunteer interpreter in the US immigration court. She was just awarded a MacArthur Fellowship, sometimes called the “genius grant.”

The questions are hard for the children to answer. In some cases, they are very young. In most cases, they are traumatized. It was trauma—violence, threats, gangs—that made them leave home. All of them are tired, intimidated by the immense city, the bureaucratic labyrinth, the US government’s policy of

callous indifference, and the hands off brutality of la hielera, the cold cells where migrants are initially detained.

Luiselli does the best she can to evoke the children’s words in Spanish, which might not be the child’s first language. She translates her Spanish into a third language, English. These words will give the child a chance at a new beginning and if they fail to convince, the child will be sent back to the homeland they fled.

The children are young, they do not know how to describe what they’ve done, they did not know where they were while they traveled north, they have no notion of geography, and sometimes they say whatever comes to mind just to get the questions to stop.

Luiselli follows Manu, a teenage boy from Honduras, whose best friend was shot by a gang when the boys refused to join. Manu was afraid to attend his friend’s funeral and fled north. His cousins, two teenage girls, joined him when the gang threatened to rape them if he continued to refuse. Their aunt on Long Island paid smugglers $4000 for him and $3000 each for the girls, because “boys are the worst.”

Manu had filed a police report when the gangs first threatened him, he still carried the worn piece of paper that finally persuaded the court to grant him asylum. Now all of them lived with his aunt in a poor town infested by the same gangs. Six months later, he told Luiselli that his new home “is a shithole full of pandilleros [gangsters], just like Tegucigalpa.”

Luiselli’s account ends on a note of hope. She is teaching advanced Spanish conversation at a Long Island university and tells her students about the child migrant crisis. Midway through the semester, her ten students create an organization to support immigrant children. For their first action, they wear T-shirts that say, “Refugees welcome here,” to the presidential debate of 2016. They go on to organize soccer games and English classes for migrant kids. Manu is one of the first to show up for soccer.

The title, tell me how it ends, comes from the question Luiselli’s daughter keeps asking, and Luiselli has to say, I don’t know. I don’t know. She wrote the book in 2015. Today the situation is worse.