My adventures in Wilton Manors 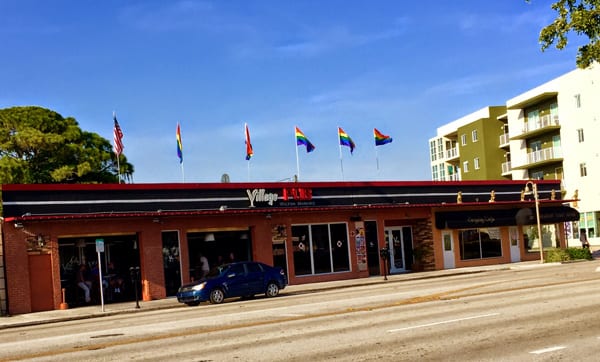 HAVANA TIMES — Luis, why didn’t you visit Little Havana in Miami instead of coming directly to Fort Lauderdale?, “Well, I’m going to give you a simple answer to that question: because I’ve had more than enough of the version in my own country. Plus, I’m not in a position where I can spend extra money traveling to get there, and much less in a position to abuse the hospitality my hosts in Florida are showing me, I told an acquaintance who lives in Hialeah.

I must admit that it’s true what my colleague Erasmo said a while ago in one of his articles for Havana Times about how “nice people are in the US.” During the four days I spent in Fort Lauderdale, even though my hosts were in the process of moving house, I can’t complain about their excellent attention. In my naivety, I’ll say that I was lucky to be surrounded by such highly-educated people, not at all vulgar, who have a culture of looking after the ecosystem that surrounds them to the extreme, looking after plants, animals and cleaning with the utmost care.

Everywhere I went, I could see how impeccably clean everything was. In my mind, my other “I”, that is to say my ego, played jokes on me by comparing the reality I saw before me with Cuban reality, which has nothing to do with being capitalist or socialist, it comes more from lifestyles as to how systems project themselves on society and how society responds to the system’s actions.

Upon seeing how clean a city was, which by the way, you have to have a car or know the bus itinerary to be able to move from one place to another in, because almost everything is at least 20 minutes away by foot, except for close by Wilton Manors, popularly known as Florida’s Gay Village, according to one of my hosts, and is one of the largest LGBT areas in the United States.

I could confirm this for myself with my own two eyes on my second day in Florida. Questions about Cuba didn’t end, they were mainly about the Castros, Communism and LGBT people’s rights on the whole.

As an ambassador for the Cuban LGBT community, it was an interesting experience; I learned that the level of information that many people in the United States have about Cuba dates back to the ‘60s, not so different from the Cuban government which is stuck in this decade in one way or another, because of reasons that I still haven’t managed to understand, but I will dare to say that “the two blockades” are to blame.

“Luckily, Cuban society has matured a lot with regard to accepting and tolerating people who are different, in fact, today, it’s one of the most open countries to sexual diversity in Latin America and the Caribbean,” I told one of my hosts’ friends who fell in love with my country when I told him about the values of the Cuban people, their history, diverse culture and classic cars.

By the way, with regard to this last point, many US people think the old cars in Cuba are a luxury, to which I responded that this mode of transport makes up almost half of public transport (collective taxis), mainly in Havana, and represent an important means of survival for drivers and their families. Of course, it’s important to clarify the difference that exists between classic cars that operate as collective taxis, and those that operate as express taxis or are rented out for a period of time, this is where prices vary. I concluded.

As a non-heterosexual person, my interest was more focused around getting to know the dynamic at Wilton Manors, its lifestyle, the kind of people I could find there and its attractions. Just to mention a few; in terms of quality of service, the Courtyard Cafe really caught my attention, not just because of the handsome men in all of their diversity, but because of their professionalism, swift and efficient service which they give to customers no matter what their sexual orientation, something that needs to improve quite a bit in Cuban private businesses, and doesn’t really exist in the state-led sector. At least, in my own experience.

“Night life can be more or less buzzing depending on the day of the week,” one of my hosts said, who explained that Fridays and Saturdays are normally the days when you can find lots of people in the Gay Village, because it’s the day people leave work.

“I would like to go to a sauna tonight,” I asked inquisitively. Then, he explained that there were two, a very large and modern one, and the other not so much.

We tried going to the new one, but there was a huge party inside and we didn’t have the opportunity to go inside because there wasn’t anywhere to park the car. That’s why we opted for the second one, a little older and less beautiful than the new one.

“I’m sure you’ll have a good time,” my host added.

And I did, not only because I got to enjoy the pleasure of human flesh, but also because I was able to see just how wide and diverse human thought can be up close. I couldn’t help but think about just how sad gay life is in some countries, because there is an ideology which violates people’s individual rights to satisfy their basic needs, which doesn’t necessarily arise from capitalist trivialities, I like to think that it has something to do with the essence of each individual person and their preferences.

Then, I reflect a little bit and take a close look at how institutions with a “traditional-homophobic” and conservative make-up have interfered in human beings’ sexual freedom throughout the history of mankind, and I look at my country with great pain when thinking about this because, in spite of my society being very educated, our leaders have yet to put ensuring the LGBT community’s rights on the political agenda as a serious issue. Rights, which not only have to do with entertainment, but make up a part of every person’s daily life within this community.

“I have to admit it was a very peculiar adventure”, I told my host once I got home, to which he responded that he was really sorry that I didn’t get the chance to get to know the other sauna, as it’s cleaner, the people there are more beautiful and it’s much bigger than the one you went to. “It’s OK, next time. In the meantime, I’ll be looking forward to the next adventures that are waiting for me.” “That’s right Luis, tomorrow we’ll take you to a nudist beach and then we’ll go to Orlando the day after, there you’ll get to see Disneyland and several theme parks.”

One thought on “Florida’s Gay Village, Life Stories and a Sauna”