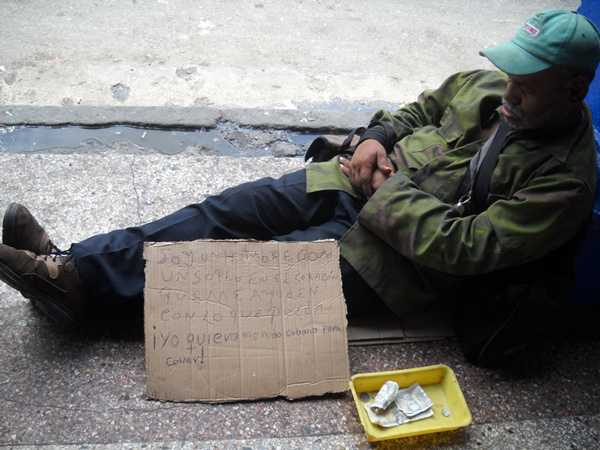 HAVANA TIMES — Of all the kinds of beggars I’ve seen in Havana, the “sleeping beggar” (as some of the locals and workers in the area refer to him) is doubtless the most peculiar. I saw the man on Reina street, in the neighborhood of Centro Habana, lying across the entrance to a building, with a sign that read: “I have a heart murmur. Please help me with anything you have. I want some spare change to buy food.”

The last medical exam I had, back when Cuba’s health system wasn’t as shameless as it is today, revealed I also have a heart murmur. I haven’t really worried too much about that. I work as a journalist and, even though I have some difficult times, I try to overcome this condition.

The “sleeper” seems to have chosen a different path. What I mean to say is that his condition does not truly justify the way in which he’s chosen to earn a living. Everyone is free to choose, but, where would we be if all sick people in the country began to beg on the streets? 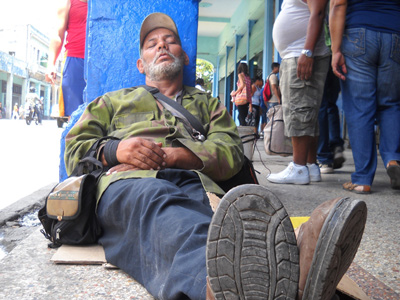 The attitude of the “sleeping beggar” strikes me as an extreme version of the attitude the average Cuban has adopted with respect to work. Could we be dealing with a new evolutionary development, where one needn’t implore others for money? Could I be the one who’s not in step with the times?

When the sleeper awakens he finds, as if by magic, a sum of money that is enough to buy some food with, as he requested. If he earns 15 pesos a day, that is a better salary than what the average Cuban worker earns.

That could even give him enough time to do something else. I imagine a person who sleeps so much during the day can’t be too tired at night and can do something then. The only obstacle is one’s dignity, but, if one overcomes this hurdle, the coast is clear.

Of course, there’s the issue of the pity I should have for this man. Very few human beings inspire this feeling in me. The sleeper actually inspires admiration in me. In his own way, he is a winner, yet another survivor of the crisis.