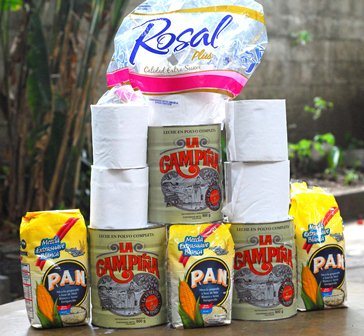 HAVANA TIMES — At this point, I no longer care who is the first, second or third to blame for the situation in Venezuela.

At this point, that is, it doesn’t really matter whether the first to blame is the government and its economic policies (as well as corrupt officials that ship tons of food to Colombia illegally), or some shopkeepers who hide certain products in order to sell them at triple the market price later, or the bachaqueros, who wait for products such as milk and flour to go on the market in order to buy as much stock of it as possible and sell (at triple the price) in the black market.

None of this is really that important when it’s a question of finding flour, milk and toilet paper.

I barely use flour (with which arepas, part of the diet of the majority, is made) and I use much less toilet paper as others do here. As for milk (and powdered milk particularly), so many people around the world have begun to question its actual “benefits” that it could well begin to gradually disappear from our daily diet. Still, many people continue to consume it, and most buy it for their kids.

I am tempted to say: “Heck, we live without it in Cuba and no one’s died yet.” But we’re not in Cuba.

The point is that, today, finding a bit of milk in Venezuela can turn into a veritable adventure. In the past few months, I’ve traveled through several states in the country and have seen long, sweaty lines of people in front of State or private markets offering the product.

Last week, we were walking near a Bicentenario (large, government-run markets offering products at reasonable or “friendly” prices) and saw a number of people walk out with cans of milk.

“Hey, look!” said my partner, who’s always on the lookout for these kinds of things, as though she were the one from Cuba.

When we went inside the market, we were somewhat disappointed: there wasn’t a single can of milk left on the shelves, even though purchases are restricted to one can per person.

Someone said to us: “Stay close to the chekout counters. When one person tries to buy two cans, they take one away from them and you can have one of those.”

Team work is always more productive, so I stood in line to buy something while my partner went out to hunt, that is, to stand by the check-outs to see if some unfortunate soul was forced to part with one of their cans of milk.

It took nearly two hours to get to the check-out counter and, during this time, I was able to see and hear a bit of everything.

Standing in line ahead of me was an elderly gentleman who had left his home early in the morning to go shopping at the opposite end of Caracas and had to walk a very long distance to get his hands on some milk for his granddaughter (the child’s father could not take on such a journey, for he was bed-ridden, recovering from a gunshot wound).

A woman in the line taught us some of the benefits of barley and a number of different ways of cooking it.

While we were talking, a man arrived, stuck his hand into a pile of bags of bread on a shelf and “found” a can of milk. He darted off with it, in the direction of a check-out.

The people in line immediately reacted. Shelves with milk cans among bags of bread?

Like in the Old West, but without the gunfire, the line lunged towards the shelves and began looking for the much-coveted white gold. Nearly everyone in the line found cans of milk, mysteriously hidden behind other products.

Someone gave me one of the ones they found and told me people hide them in order to go to the check-out more than once and to be able to buy two or more cans.

People who sell these also hide them. Perhaps even the market employees do so. It really makes no difference.

Some cursed. Others said that everyone should have the right to buy as many products as they want, the way it’s always been.

At that point, when I was already holding a can of milk in my hands and beginning to feel some pain in my feet, my girlfriend arrived, victoriously holding another can of milk.

How did she get it? With the method they had suggested to us: by waiting next to the check-out.

She wasn’t the only one “out hunting”, it seems. The gentleman who had kindly passed on the “extra” can of milk to her struck a deal with her: in exchange for the “extra” can, she was to help him get a number of kilograms of rice and a package of toilet paper (products which are also regulated) “through the check-out.”

She agreed, and this is how we walked away victorious from the small battle at the Bicentenario market.

Not everyone is as lucky. The cashier told us that, the day before, a man had busted another man’s head open with one of those cans. Perhaps they should go back to packaging milk in plastic bags to prevent this sort of thing from happening. It’s not something I would come up, but I imagine it could well be the solution proposed by a bureaucrat asked to deal with the problem.

4 thoughts on “Finding Milk in Venezuela”