Residents note that the only internist at the hospital is not on the island, because he was transferred to Bluefields, and there is no one to operate respirators.

HAVANA TIMES – Idyllic Corn Island, in Nicaragua’s Southern Caribbean Coast, recorded ten deaths with Covid19 symptoms in June, and conditions are worsening in a population of 7,500, with suspected cases of Covid-19 hovering 80, according to sources at  the Ethel Kandler Primary Hospital.

The problem is that the only person who is able to operate the two respirators that are available at the hospital is not on the Island, because he was transferred by the Minister of Health to Bluefields, where the first Covid-19 cases were reported in the South Caribbean Coast Region of Nicaragua.

“The Hospital here has no conditions”, for treating serious Covid-19 patients, said a source from the Island who knows about the area’s situation regarding the pandemic.

Residents with serious Covid-19 symptoms should be transferred from Corn Island to Bluefields to be treated, and the transfer is done by speed boats, since between Bluefields and Corn Island it is only possible to travel by air or water.

Locals worried about the advance of the pandemic, told CONFIDENCIAL, under condition of anonymity, that at the Primary Hospital the same nurses that are treating the Covid-19 patients are also treating the rest of the population, therefore many fear becoming infected in the same hospital.

“The Minister of Health (Minsa) said they were completely prepared, and it isn’t true”, complained one of the residents who also regrets what he considers to be an irresponsible use of water ambulances in the area.

Another islander, who also requested anonymity, sent a photo showing the state of the only water ambulance operating in the area, which instead of being used to transfer patients in critical state, remains in disuse.

In 2010, the Island’s local government made a commitment to convert an island boat into a water ambulance as one of many steps Corn Island was taking to open to the world and welcome tourists from all over.

On June 20 alone, three patients were transferred from the Island to Bluefields to be treated at the Regional Hospital, according to local media reports on that date.

CONFIDENCIAL confirmed with medical sources in Bluefields that for each transfer, Minsa pays the local fishermen and doesn’t use the water ambulances that are intended for this purpose.

In other cases, the transfers are made with the airline La Costeña, which at the end of June resumed two daily flights to the Island, but due to low demand many believe it could suspend operations again.

For some residents, this represents an additional expense, because although Minsa assumes the cost of transporting people to Bluefields, others complain that on some occasions they have been charged for the fuel for the boats.

According to the local media outlet Noticias de Bluefields, the water ambulance cost about 1.5 million cordobas and had two engines of 200 horsepower each.

“The ambulance is lying on the beach. They took out the engines, now, at a time when the boat is needed to bring oxygen, stretchers and everything,” one of the islanders regretted.

Corn Island is located 70 kilometers from Bluefields. The trip by plane takes approximately one hour, while by speed boat it can take two or three hours if there is bad weather. By a slower boat the transfer takes up to four or five hours.

According to official data, in 2017, a total of 164 million cordobas (around US $5 million) were invested in the Corn Island hospital, but only two respirators are available to care for the population affected by Covid-19 and other illnesses.

Karawala is a mainland community, the main population center of La Cruz de Río Grande, also in the Southern Caribbean Coast. The pandemic has caused the residents to continue to ask for food supplies and hygiene kits, since they normally work in fishing and agriculture, but in this community they have decreed self-quarantine since last May 20. 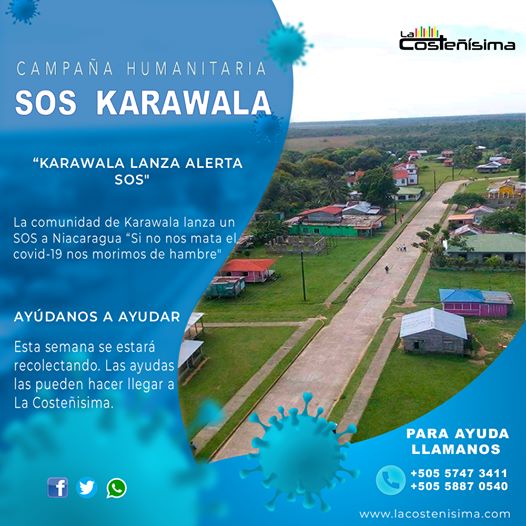 Haydee Bautista, a community leader in Karawala, said that the quarantine has caused many families to suffer from a lack of food, even worse considering that there are no people in the area who have jobs generated by the government or other traditional sources.

Bautista says they started a fundraising effort to try to support the residents of the community, and this June 30th they managed to send 400 masks, alcohol and chlorine which will be administered by the reverend of the Moravian Church. However, she warns that much more help is still needed.

“They have no contingency plan, at least in the affected municipalities there should be government measures”, demands the community leader.

The local media outlet La Costeñísima, which director’s Sergio León Corea, died victim of the pandemic last June 14, reported that in Karawala two people died on the 28th of that same month, and started a fundraiser among Bluefield’s residents to assist the population in Karawala.

“At La Costeñísima we are launching a humanitarian aid campaign for the Karawala community, they do not have supplies to prevent Covid-19, there is extreme poverty. Those who can support us should share this information. The campaign is called Sergio León Humanitarian Campaign, explained Kalua Salazar, chief press officer for La Costeñísima.

The community members, from the Ulwa indigenous group whose population is around 330 families, need more personal hygiene and cleaning kits, as well as food in order to cope with the pandemic, warns Bautista.

In addition, community leader Haydee Bautista, calls on both the central and local governments to create awareness campaigns for people to mitigate Covid-19 in these very remote areas.