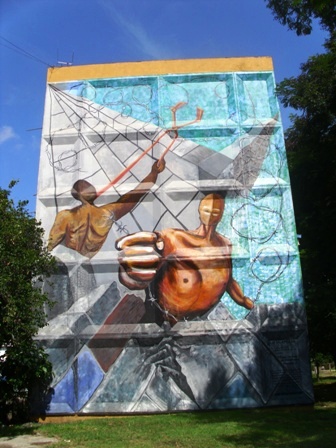 HAVANA TIMES, 26 Sept. — Muralismo is an artistic movement within the visual arts.  From its beginnings it was thought of as method for cultural instruction and has been employed in public places, those to which all types of people have access.

Santiago de Cuba exhibits these in many parts of the city; they’re on walls and buildings, taking the form of monumental paintings that are truly attractive.  About 20 years ago there began this tendency to work with silhouettes, forms, figures and colors on concrete surfaces or on the facades of buildings.

The first project that created murals in the city was called “Internos,” which was the result of a collaboration between local and foreign visual artists (Europeans mostly).  From that period came the splendid mural that adorns the administration building of the local university here, La Universidad de Oriente.

Beyond its legitimate consideration as an artistic movement, muralismo can also be defined as a social and even a political movement.  This stems from the themes that its artist relate or depict; these can illustrate the situation of the place where and when they’re created or because they can be no more than a demonstration of certain feelings by their creators in specific social conjunctures. 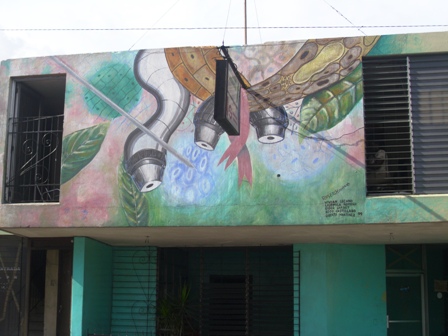 For example, the project Internos was a manifestation of support by a group of painters from other nations who felt solidarity with the difficult socio-economic situation that the island experienced in those bitter days euphemistically termed the “Special Period.”  They made material contributions to carry out this project and — more than this — they left their expressive marks in several places of the city.

Fortunately the Internos project has not been allowed to become lost.  Many visual artists from Santiago and from other parts of the country and the world have continued filling the city with beautiful murals that speak of a to certain feeling; they are distinguished for being reflective of their time and can be anything from didactic, political, artistic or simply ornamental.

On public buildings, residence halls, schools or simply on long walls on any street, my Santiago shows off its magnificent collages and boasts of being able to take on yet another nickname: Santiago, “the mural city.”