…to restore credibility to the system 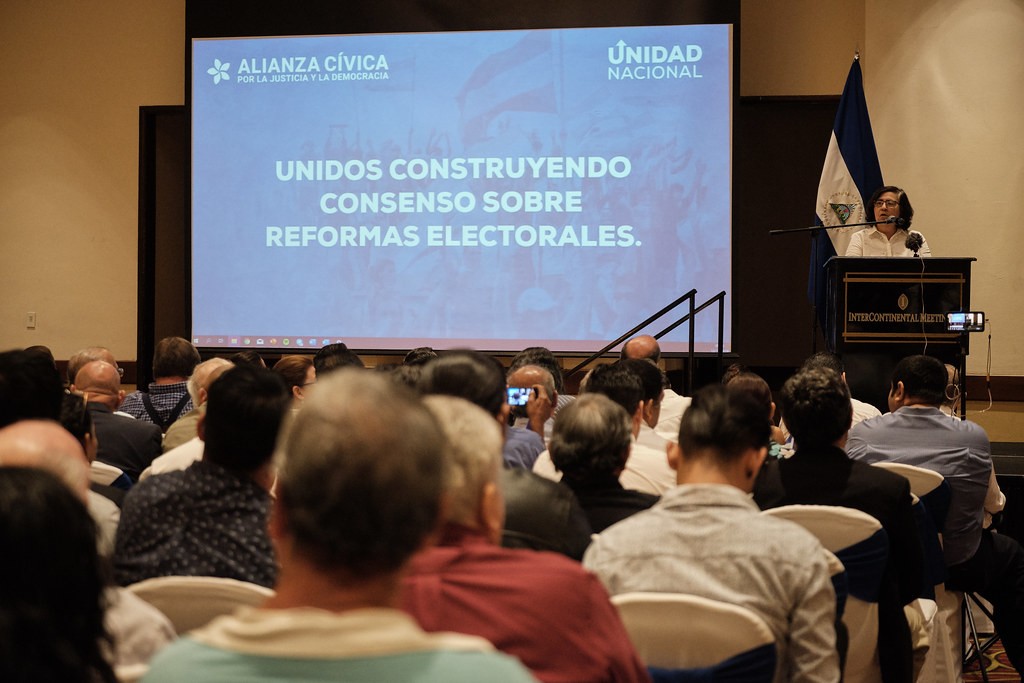 HAVANA TIMES – The Civic Alliance and the Blue and White National Unity (UNAB) presented on December 12th a broad proposal for electoral reforms, both at the constitutional level and the law itself, which was unified after months of consensus work. The reforms are intended to restore confidence to the electoral system, a virtue that is lacking after manipulation and repeated electoral frauds committed by the Ortega-Murillo regime.

The proposal includes changes to the Constitution in electoral matters, among which is the possibility that civil society can nominate candidates to be magistrates to the Supreme Electoral Council (CSE). In addition, it emphasizes in the non-reelection for the office of President and the prohibition of the candidacy of the President’s spouse. The reforms would restore the threshold of 50% of the vote to win on the first round and provide for a runoff if that is not reached. It also makes possible independent candidacies, eliminates the legal norm on changing parties, and guarantee the rights of former prisoners and exiles to participate as candidates in public election.

The presentation of the proposal was attended by dozens of citizens as well as members of the diplomatic corps accredited in Managua, among them the United States Ambassador Kevin K. Sullivan and that of the European Union, Pelayo Castro Zuzuarregui. The diplomats paid attention to the dissertations but did not provide statements in this regard. Ambassador Sullivan just said: “We come to listen and learn from the proposals of these two organizations.”

The members of the Civic Alliance and the UNAB emphasized that this reform proposal was not formulated to go to elections “tomorrow,” since they believe that while there are political prisoners there will be no conditions for any election.

The electoral expert Jose Peraza explained that the reform proposal intends to be a declaration of intentions” that will be ready before possible scenarios: either a negotiation with the Ortega-Murillo dictatorship or that the Organization of American States convene an election. In that case, “we would have a desirable proposal ready to demand guarantees for a transparent electoral process.”

The proposal entitled “United building consensus on electoral reforms” consists of six themes: restoration of confidence in the electoral system; restoration of transparency and electoral guarantees; openness for electoral competition, broad, comprehensive, plural and equitable; mechanisms for citizens participation; electoral reforms and regulations of the Electoral Power and a new legal configuration for elective positions.

Among other aspects they also propose non-partisan electoral and administrative structures; new mechanisms for appointing the Poll Workers (JRV) and Electoral Police; mandatory election observation; dissemination of results on the Electoral Council website detailed by polling station nationwide; publication of all the voting records on the CSE website; separate ballots for each type of election (President, Departmental deputies, PARLACEN, Mayors and City Council members) and the prompt supervision of political parties and without exclusions. Likewise, the purging, updating and auditing of the voter registration rolls.

Relatives of political prisoners support it

The relatives of political prisoners were the first to speak in the presentation. They assured that they supported the proposal presented by the Civic Alliance and the UNAB. At all times, they insisted on the release of prisoners of conscience as a sine-qua-non condition to be able to participate in an electoral process.

Student leader Lesther Aleman said that “these reform proposals are not an end in itself, but a means to open the door towards democracy and towards the construction of an opposition coalition that will bring together all the pro-democracy, justice and freedom forces, capable of being an alternative to power, close to the problems of citizens, and that will force Ortega to restore constitutional guarantees and carry out elections.”

Other proposals for electoral reforms are: eliminate the free National Assembly seat to the outgoing president and that of the second place candidate in the new elections; make non-partisan the citizen identification card process and establish sanctions for those who make an irregular handling of this activity; establish the possibility of requesting the holding of a mid-term recall referendum for the terms of offices of President and Vice President; among other electoral reforms proposals.

“With these reforms, the process of economic and social recovery of the country will be facilitated, the support of the international community will be strengthened and the demand of the Nicaraguan people for a clean, transparent and observed process will be channeled,” said Juan Sebastian Chamorro, member of the Civic Alliance. “If these reforms are carried out, it is imperative to restore citizen rights and guarantees, and the release of all the political prisoners and compliance with the agreements of March 27 and 29, 2019.”