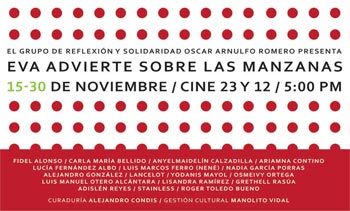 HAVANA TIMES — This past Thursday, November 15, the gallery inside the 23rd and 12th Street Cinema opened its doors to inaugurate the visual arts exhibit “Eva advierte sobre las manzanas,” (Eva warns about the apples) as part of the Campaign for Nonviolence against Women in Cuba.

Alejandro Condis and Manolito Vidal did excellent curatorial work in assembling a wide range of styles, techniques and metaphors to tackle the issue of violence against women.

The intention of the display was to transgress the traditional and stereotypical mode with which this matter is usually addressed: “Enough with the suffering of women, the black eyes and the streams of tears running down their cheeks. In more than a few cases, these short distances between metaphor and message greatly impoverish the art,” warns Condis in the program.

From this critical position, the team set out to broaden the scope and the expressions of feminine “guilt,” without dismissing the violence employed by some women against others – a risky endeavor. As a result, “Eva advierte sobre las manzanas” (the title comes from the line by Nicaraguan poet Gioconda Belli), brings together 19 talented artists, mostly youth.

In addition, on that same afternoon (November 15), two performances were conducted:

Lucia Fernandez Albo served chocolate on the surface of her painting and on trays on the floor. The work “Mirame, tocame, comeme, pero escuchame” (Look at me, touch me, eat me, but listen to me) was complemented with recorded music (by Ernesto Blanco), calling attention to the objectification to which women are subjected in their role as objects of desire and whose views and opinions are often not taken into consideration.

As could be expected, people gorged themselves on the chocolate and hardly used the headphones. Lucia Fernandez Albo commented that in the not too distant future, she will be putting on a personal exhibit that focuses on issues of sexual diversity.

By the way, I found out about the chocolate afterwards. What happened was that I was fascinated by the other visual arts activity, Nace una estrella, conceived by Nadia Garcia Porras as a complement to her photomontage Fifth Avenue. This involved the model who was featured in one of the works – she was strolling throughout the entire exhibit.

Dressed in supposedly stylish clothes and accompanied by a lapdog in her arms and an entire entourage (an assistant, a nurse, two guards, two cameramen and a celebrity journalist), she looked at the paintings with a puzzled expression, made meaningless statements and ate bread.

She was attacked twice by people who presumably were jilted lovers, and she demonstrated deep concern for the blood pressure of her pet.

I’ll leave you with the names of the works, their creators and a few images from the exhibit: