HAVANA TIMES, July 12 — While skimming the webpage of the National Statistics Office (ONE), I stumbled on all the demographic estimates made in 2009.  I found some information — though incomplete, as with all statistics — that was valuable and professionally organized; it spoke to a very complex Cuban reality.

Above all, it showed that we come from or live on an island that is obviously in a process of depopulation.  The statistics document an absolute reduction of the population, falling to about 11,242,638 residents in 2010.  This meant that last year on the island there lived some 2,500 less Cubans than in 2005.

This is a situation tied in part to a drop in the birth rate, which produces the picture of an aging work force that’s not being replaced.  However it’s also a tragic example of demographic exsanguination, the result of emigration.

From 1994 to date, more than a half million Cubans left the island officially (meaning without counting illegal emigration).  Though it might be supposed that this figure was influenced by the immigration stampede allowed by the Cuban government in 1994, the truth of the matter is different.  In 1994 the number of Cuban migrants leaving in all directions barely reached 50,000, while last year almost 40,000 quietly slipped away.  In fact, between only 2004 and 2009, more than 210,000 Cubans emigrated.

In other words, a daily stampede is underway, though less spectacular than the one that served Cuba’s leaders as a safety valve to reduce the social pressure of the ‘90s crisis.   The data forces us to reflect in two directions.

The first is the imperative of adopting policies for retaining population.  Moreover, that cannot be done — given the ineffectiveness and the immorality — in the way that the Cuban government currently approaches it: by shackling people with arbitrary padlocks that leave migrants with the sole option of non-return and their having to play the role of a supplier of money to their relatives on the island and to the government that banished them.

Cuban society doesn’t need any more controls, but many more openings.  It needs ones sufficient to socialize the expectations of social mobility and personal realization.  Today these expectations remain kidnapped by an elite class that bureaucratically restricts roads and limits lives.

The island also needs a policy to attract people to return.  One fact is elementary: 85 percent of Cuban migrants live in the United States.  There they possess properties whose value is greater than the annual Cuban GDP.  In addition, they show educational indicators superior to all other minorities, even on occasion above Anglo-Americans themselves.

I won’t stop here to discuss the reasons for this strength, it only interests me to highlight that it exists.  What’s more, given its characteristics, this asset could be channeled into human resources, social or economic capital for the takeoff of a decrepit economy presently sustained by Venezuelan subsidies.  But this could only happen if the appropriate policies were directed toward these ends. 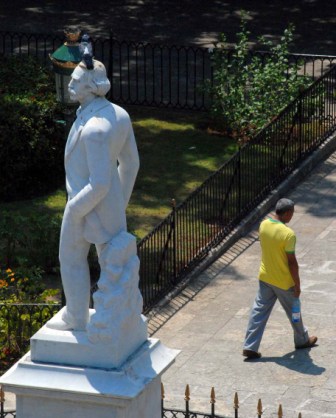 Only such policies — and not the small-minded bureaucratic controls that keep nationals in exile,  families separated and citizens caged — can contribute to halting (and reversing) the demographic hemorrhage that we suffer.

Obviously this is second point that I want to observe.  Here we don’t speak of any type of migration, though international migration is composed of all types of people.  It’s undeniable that within these there predominate people of optimum working ages and with superior levels of mental and physical dexterity.

These are people who can imagine themselves as winners in the struggles they anticipate in promised but highly competitive lands.  The few studies carried out in Cuba suggest that our country is not an exception to the rule.  This research consequently shows that emigration produces a reproductive hole, one that is irreparable in terms of human resources.

This is evident, for example, in the territorial origins of migrants from the island.  According to ONE, the Cuban province that has been most affected by the demographic drain has been Havana (city).  Nonetheless it is the receptor par excellence of internal migrants (legal and illegal, because we can’t forget that the country suffers a legal norm that impedes free internal movement).  In recent years the capital has suffered a net loss of about 60,000 out of a total of just over two million residents.

But despite harboring only 19 percent of the national population, 47 percent of migrants came from the capital.  On the other hand, Havana receives an influx of less educated eastern migrants – directly or using the outlying municipalities as springboards.

This is to say that the city experiences a drain of human capital that, while guaranteeing it welcomed revenue from greater remittances for short-term survival, dims its long-term prospects.

The Dominican Republic is not an important destination for Cuban migrants, and a large part of those who do come use the island as a place to access the United States, though that may mean finding a way to the jagged coasts of Mona Island (part of Puerto Rico).

But there remains a colony that is small but highly visible due to its presence in the press, in academics, social activism, medicine and in many other activities.  They possess all the immigration classifications imaginable, but one same decision: they are not going to return to the island.

A humorous and successful friend of mine, who by the force of his own labor had just bought a beautiful apartment in Santo Domingo, likes to say: “Cuba? – only from a distance.”  And he says it smiling, while he hangs a painting in his elegant study, a new office that speaks of the pride of being Cuban and of the privilege of being from Havana.

And now, without passion, tell me…who’s losing out?