HAVANA TIMES, April 28 — Baseball in Cuba seems doomed to fade into the background behind the overwhelming advance of the world’s number one sport: soccer, which is capturing the hearts of the island’s youth. To confirm this, all one has to do is go out on a Sunday afternoon to any neighborhood or small town.

They lack the material and infrastructural resources needed for baseball, but for soccer all they need is a ball to get together to play on the few fields that exist or in any street, park, vacant lot or even a pasture.

Yet baseball is still officially considered the “national sport.” Among other reasons, this is because its supporters include the elderly who sit in the seats of decision making at the different levels of power.

Isaiah Agramonte, a former soccer player who graduated from the School of Sports and is now a children’s coach, explained that in recent years “the growth of soccer in Cuba has been huge, the country had never experienced anything like this.”

We found 16-year-old Arnold Bueno playing with a group of friends. He assured us that among guys his age, “There are more people who like soccer than baseball, even though not all municipalities have soccer fields.”

Even with the scant official encouragement, as evidenced by the few playing fields that exist and the low budget for the game, soccer has arrived on the island. The names of Messi and Ronaldo are the talk of the youth, who can often be seen wearing shirts of Real Madrid or Barcelona.

The last World Cup, in South Africa, had so much interest that cinemas were set up to screen the broadcasts live, which brought out thousands of young people in overflowing crowds. The spectators often wrapped themselves in the flags of their teams and painted their faces with their colors.

Cuba is in a moment of generational change, a situation that calls into question some of the “most sacred cultural traditions.” Sports doesn’t escape this relentless evolution, it too is influenced by globalization and the flow of information. 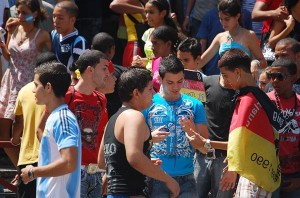 The will of the people has been exerting itself. First this was with the matches between Barcelona and Real Madrid, where hundreds of kids gathered to watch the games videotaped by some foreigner who had access to Spanish TV.

Seeing the economic potential, some bars and hotels then set up television satellite dishes to transmit the best matches of the European soccer leagues, while of course requiring customers to consume the minimum.

Cuban TV finally bowed to the people’s pressure and began broadcasting the biggest matches of the European soccer – though still giving greater exposure to baseball, so that it would remain the absolute king.

Baseball has its advocates in a generation that continues to occupy the top positions in the government, the Communist Party and in the media. They are the ones who decide how much air time is allocated to the different sports.

The critics of soccer say that Cuba will never be a powerhouse in the sport. They argue that there’s an error being made in the nation’s information policy by giving access to the best soccer in the world while allowing only Cuban League baseball to be broadcast.

The problem is that the alternative would be to broadcast major league baseball from the US, which is blacked out because it belongs to the “enemy” – that opponent that “steals” athletes from Cuba and includes many Cuban “deserters.”

The degree of repudiation by the authorities is such that a documentary filmed in Cuba about the “Industriales” baseball team was banned on the island for five years because it had interviews with some Cuban athletes who now play in the majors.

(*) An authorized translation by Havana Times (from the Spanish original) published by Cartas Desde Cuba.