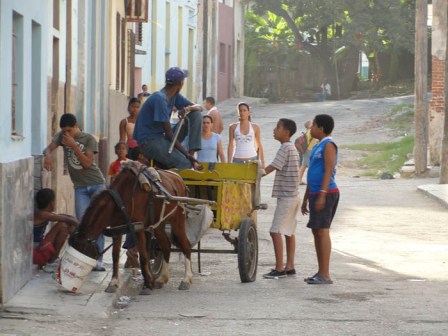 HAVANA TIMES, April 7 – In our country it’s common and easy to brush up against the limits of the legal, including flirting with activities considered criminal.  It’s become common practice to violate the established statutes in order to survive.

We usually associate the word solar with poverty, delinquency and other problems.  But Pavel is a person with very good manners; I’ve never heard him say a bad word, nor have I ever known him to be involved in a fight.  In fact, during my childhood I used to visit him, and even though the place where he lived was one of those that had a common bathroom, the people there were extremely friendly and supportive to each other.  I would get treated as a princess.  That bathroom that everyone used was always clean.

My friend Pavel is now a family man and supports himself with his job…plus some other things.

Between the end of the nineties and the beginning of the 2000s, when the majority of the video players in the country were VHS, Pavel served as the messenger for a video rental center.  This was considered an illegal business.  When I asked him why, he answered that it was because of the possibility that some people might rent our pornographic videos or documentaries that spoke out against the government.

In the street the police would stop anyone they saw with a large backpack who looked suspicious to them.  “The disadvantage of the VHS cassettes,” Pavel explained to me, “is that they’re very bulky.”  But the problem wasn’t so much having the movies, because these could be his own property, but rather getting caught with the list of titles for the clients to choose from, or of people who had rented movies and the dates they were due.  Some people carried a small notebook.  “If they caught you, they confiscated the movies and they would fine you 1,000 pesos or more.”

Pavel would come home from work every day and then head out again to visit the homes of his customers, often with large distances between them, so that he had to pedal a great deal.  One of those nights he was returning home with his backpack full of cassettes that had been returned to him and some others that he hadn’t been able to rent when he saw a police patrol car coming directly towards him.

He prayed that they wouldn’t stop him and continued on like someone who had nothing to worry about, but he carefully snuck the list out of his pocket.  Luckily he had it all on a single sheet of paper.  The patrol stopped in front of him and the two police agents requested his identity card.  Then they asked him what he was carrying in his backpack.  “Movies,” Pavel responded with all sincerity.

“How nice,” they said, “And the list?” “What list?”  Pavel asked with all the innocence in the world.  “These are movies that some friends lent me and others that they copied for me.”  But the representatives of the law didn’t believe him.  First they looked through the backpack and later they asked him to lean against the car so they could search him.

By this time the list had been converted into a little ball of paper, and Pavel took advantage of the moment he went to lean against the patrol car to let it drop.  The police checked each pocket and made him take off his socks and shoes.  “You’ve hidden it very well,” they told him.  At the end of a half hour they had to give up and let him go.  He took off, pedaling slowly.  Once the patrol car was lost in the distance, he returned for his list.

“But being the messenger isn’t as good a business as having your own movies and renting them them,” he tells me.  He managed this step between 2002 and 2003; his aunt who lives outside the country sent him a bunch of films and he recorded others here.  One of those afternoons, when he was already in the doorway of his house with his backpack full of movies ready to go out to work, a patrol car parked in front of him.

Two police got out, asked for his identity card and began asking him what he had in the backpack.  As usual, he responded honestly and opened it up to prove it.  At that moment, he remembered that he had left the list in the house.  That was a good thing.  But the bad thing was that his wife was coming down the stairs to catch up with him and hand it to him, just as the police were asking him what he was doing with all those VHS cassettes.  “They’re mine, Officer. The problem is that I’m leaving my wife, and since the movies are mine I’m taking them with me.”  He spoke loudly so that his wife could hear him and she walked right by him as if she didn’t know him.”

Pavel tells me all this with the greatest naturalness, as if it were the most normal thing in the world to violate the law and fool the police.  But the most surprising thing is that it seems funny to me and it doesn’t enter my head to scold him or tell him that what he’s been doing is wrong.

Should I have discouraged him?

I should have done so, because I’m older than he is.  Nevertheless, it seems logical to me that he should struggle and earn his living.  The salaries here don’t cover our basic needs, things are ever scarcer and more expensive.  In the end, what crime is he committing?  The movies are his; he didn’t steal them and he doesn’t force anyone to rent them. 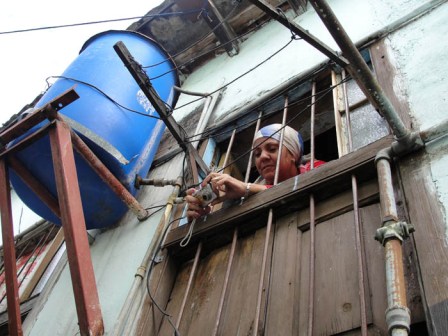 In addition, they aren’t pornography nor prohibited documentaries.  But…what if they were?

I believe that an adult should be free to decide what he or she wants to see, and that the interests of the government shouldn’t be the factor that determines what is illegal and what is not.  The only thing that really keeps me from doing the same as Pavel is that I’m not as brave; or maybe it’s just that I don’t have two children to support.

They say that the third strike means out, and many times this saying turns out to be true.  Pavel had been lucky the two previous times that the police stopped him.  On this occasion, he was on his bicycle with his backpack full of movies and the list in his pocket when he was called over by an individual walking down the sidewalk and wearing the well-known uniform.

Right away, he put his hand in his pocket to get rid of the paper, but this time it wasn’t going to work.  “I know that you rent movies,” the officer told him.  Pavel broke into a cold sweat before the man could finish talking: “Would you have anything good in there that you could rent me, comrade?  The ones I have at home I’ve already seen ten times.”

“But, what if it had been a trap, Pavel?” I asked him. “And if they had confiscated the movies and you had to pay a fine?”  “Nothing special. I would have paid it and then gone on with the business.  That’s what everyone does. You gotta make a living,” he tells me.

Right now he’s not renting movies because almost everyone has DVD players and no one wants to rent VHS cassettes.  “The good thing about the DVDs is that they’re not bulky.  As soon as I get my own, I’ll certainly go back into business.”  Meanwhile he continues to go to work every day to his regular job and fulfills all his obligations there; but he’s waiting for some extra little thing to come along.  I’m almost certain that it won’t be something completely legal.

2 thoughts on “Cuba Living On The Edge”