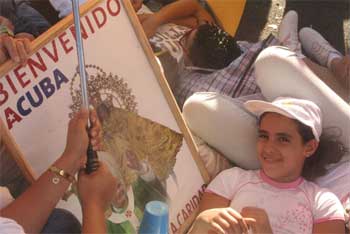 HAVANA TIMES, March 30 — On Wednesday I watched the Mass officiated by his Holiness Benedict XVI on television.

I confess that despite all the political tensions that the event caused (implicitly and explicitly), despite the rapidly deployed machinery of improvised tolerance and ecumenism, I felt a huge relief with respect to the tone of the speech.

It was so different from what I’ve heard all my life coming from that historical stage.

These were perhaps the same words that broke the acoustic virginity of that site in 1998, when we were visited by the previous pope, John Paul II.

I assume there are other people with the desire and ability to offer love and reconciliation, even in Cuba, but don’t know anyone with the power to speak before a crowd packed into this “sanctuary of the revolution.”

A friend of mine once told me that he used to read editions of the Granma newspaper with marked attention. In these he would underline the most frequently words in each article, where he found that all of them had a negative tone.

Yet, there in the square, where the people are used to being hailed for their “energy and virility” — a people usually entrusted with suspicion, intolerance and belligerence — had to assume silence and humility in a rare experience.

The television announcers who hosted the live broadcast had to explain all of the church liturgy that several generations of people had been taught to ignore and even disrespect.

For the first time I heard something that they never told me or my son in school concerning Cuban history: the Virgen de la Caridad del Cobre was venerated by our illustrious mambi independence fighters.

The atmosphere in the square was softened as the pontiff spoke of the need to allow freedom of religion not only for individuals but in the community. Notwithstanding, the stones and the cement (those dead substances indifferent to human circuses) didn’t react.

Nor was there a reaction from the people who usually turn out at the square (be it out of habit, commitment, coercion, curiosity or sincere desire). After all, history — which is both reinvented and recycled — is also shaped by human forgetfulness.

I noticed the TV presenters resurrecting and even repeating a word that was almost forgotten by us: civility…

But there should be no doubts that just as the stage machinery had been deployed in a flash, in another just as rapid sleight of hand these can be withdrawn and disappear. Today what I heard on TV were usual words in the usual tone.

Very descriptive and emphatic versions of the Pope’s visit are now reinterpreting what we saw and are gradually reactivating our amnesia.

But I’m stubbornly optimistic, I don’t know why. Something tells me that change can be induced by the power of fatigue, human limits and human hunger for spirituality, love and hope.