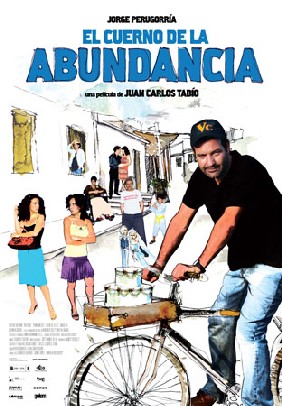 HAVANA TIMES, Jan. 29-Laughter echoes through the dark theater; expressions of joy accompany the film, up until the scene where Martica says:

“I can’t do it any more… shit, what’s happened to us? We’ve lost everything, even the family… What are we going to do Berny?”

The film El cuerno de la abundancia (The Horn of Plenty) has been a resounding box-office success. Not only because it’s a comedy and Cubans are known to love a good laugh, nor because of the first rate cast but instead because it reflects some raw truths about life on the island.

In a small town located in the middle of the country, news arrives of an inheritance to be shared between everyone in the town with the last name of Castiñeiras. From that point on there is no peace in Yaraguey (name of the town that represents Cuba, although nobody mentions the country).

In the 1990s, amid the tremendous economic crisis facing the island, dazzling stories of large inheritances for certain families bubbled up everywhere like underground springs. People went nuts, and some acquired private loans and debts they hoped to pay off when the inheritance claim came through.

This is the pretext used by director Juan Carlos Tabio and co-scriptwriter Arturo Arango to focus on some of the most serious problems facing the country. For example, the poor state of housing for the humbler citizens, honest people who live from their work and are clear about their principles.

Bernardo, father of the film’s main character, raises chickens to provide eggs for his family without having to buy them on the black market. For the same reason, he can’t fix the roof on their home (which is falling to pieces) since the cement, sand and the rest of the materials would have to come from a dubious source and he wants to do everything legally.

This character in a white T-shirt that says Vanguardia Nacional in large red letters is proud of being selected as an exemplary worker, but that doesn’t improve his situation. Even so he continues steadfastly as if he thinks it’s too late to change. Bernardo represents a defiant Communist (of the few who still remain on the island) and ends up in a wheel chair, defeated by the times in which he lives.

Bernardito (the son) believes that with the inheritance he will be able to live in the house of his dreams, a place where he’d have the privacy to make love with his wife. That’s an important point that reminds us that beyond the problems of intimacy that spring from a lack of manners or difficult material conditions (in the film, the mother uses her son’s refrigerator and thus has a copy of the key to his house) in Cuba there are no places for couples to be together in privacy.

The hotels are too expensive and in many people’s apartments there are several generations living together, which makes it difficult for each to have a room for their personal use. Bernardito is an engineer but his salary isn’t enough to make ends meet, so he also has a small movie rental business even though it is prohibited by law.

He’s an honest, hard-working young man, a little naïve, but nonetheless he is forced to violate the law to survive. This takes place all over Cuba every day. It’s rare to know someone who doesn’t do something illicit on the side, without thinking that they are committing a crime.

Bernardito’s wife, Martica, has creative ideas. She’s hoping to win a short story contest and with that money realize one of her dreams. She constantly scolds the boy (Titico) to improve his vocabulary.

In reality, very often the opposite occurs in Cuba. Children use bad language and those at home don’t give it any thought. So the kids only imitate the adults.

The film develops with a series of comic, absurd and ironic situations. It is narrated in first person with a constant dialogue with the audience that makes it more direct and real. The film also reflects the eternal struggle between the communists and the middle-class, arriving at a mutual understanding when it’s convenient, and even uniting. In the film are egotists, opportunists, the prostitute, the illegal emigrant and the social differences.

Like all good comedies (or tragedy-comedy), it provokes reflection and in some people even tears. Survival is not a game. Wanting to live better is something natural and Cubans are full of unsatisfied desires.

The last phrase of the film: There’s nothing else to do but continue pedaling, is spoken by the engineer in such an ambiguous tone that we don’t know if it is of resignation or hope, even after laughing so much. It made me think of a neighbor, Ernesto, who says that Cubans are like seals: we can be up to our necks in water and we applaud. Could that be true?