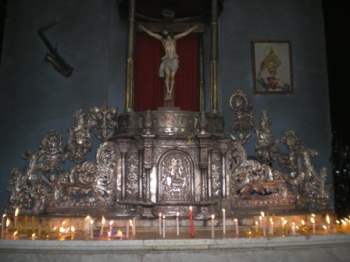 Religious practices date back to the earliest civilizations. It’s almost a human need to give credit to some divine force or a supernatural being that governs our existence.

Individuals are always unsatisfied or think that their lives aren’t long enough to live them fully or to correct the errors committed in that short time, so they hope for some path to immortality.

I’m not trying to eulogize mystic beliefs; I’m simply referring to these in our country right now. We Cubans are of a tradition rooted in religion.

The practice as well as the diversity of these belief systems here is historically demonstrable.

From the first years of the Revolution until a while after there was a certain degree of intolerance towards religion, which consequently led to prohibitions against the absolute freedom of belief on the island.

Dialectical materialistic doctrines that served as the premise of the system supplanted any idealistic propensities, of which religions are faithful exponents. This impacted even in the granting of university degrees and admission into certain social organizations.

Fortunately, this error was corrected years later, and there was an opening up to the practicing of several religions.

Like all censored acts, once these are allowed a sort of contained explosion results. It was then that many people began to publically recognize their affiliation to this or that religious faith. Many Catholics and even babalaos (priests of Afro-Cuban religions) appeared in the ranks of the Communist Party itself.

What motivates my commentary is that in the last few years I’ve seen a considerable affluence of youths turning to this. Religious congregations are growing headlong, enlarging their ranks among the youngest of society, with many university students serving as the best example.

I’ve been investigating the root causes of this situation and I have found:

– In churches or spiritual centers, general and cultural education is promoted, which is vital for the healthy development of any society.

– Fraternity, aid, respect and love for others are instilled and a tangible reality is created.

– Human beings cannot do without the belief that a better life is possible.

Myself in particular, I wasn’t raised to have an interest in religion; my generation was one that grew up in the stage of intolerance. Notwithstanding, I think that religious youths are really receiving a better education. To hope for a better life is a circumstance that no being can escape, be they religious or not – it’s instinctive.

So I ask, is it effective then for Cubans to now be turning toward faith?

One thought on “The Return to Faith”