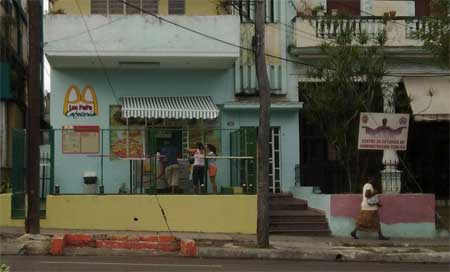 HAVANA TIMES – The word “cartel” refers to a form of monopoly, when multiple vendors in a market agree to keep prices high, regardless of demand.

In Cuba, the economist Camila Piñero has drawn attention to the appearance of such arrangements in one of her recent research papers (published in the journal “Temas”) on the emerging sectors of the Cuban market.

But you do not have read academic journals to realize that.

A few weeks ago my father was admitted to a hospital and wanted a hamburger for his dinner. I went looking to see what I could buy from the self-employed street vendors in the zone and the first thing I noticed was that a beef burger in downtown Vedado where the hospital is, cost about 60 Cuban pesos (fair enough, some of them were asking for 58) which is a lot more than normal.

I then went to a well-decorated establishment, equipped with tables, supplying beer in cans with a big flat screen TV running video clips of Marc Anthony. Hoping the quality of beef would match the quality of the singer, if not the TV, I ordered a beefburger ” to go”.

I got the burger in no time, in a disposable bag, and I carried it off triumphantly to my dad.

Oh well. In his opinion, and even though the product itself seemed to contain beef, it was like plasticine and practically tasteless. I tried a piece, and I had to agree with him.

Note, by the way, that only establishments “for the rich” in Cuba, have the aforementioned paraphernalia, by which I mean the TV, Marc Anthony, the beer and the company uniforms with a logo similar to McDonalds.

But the main product they were selling was good for nothing.

I do not know if the other micro establishments “for the rich” in the neighborhood are just as bad.

But for me it was proof of the cartel effect … and that the last thing the Cuban market economy does is guarantee customer quality – or at least a “proper” price-quality relationship.