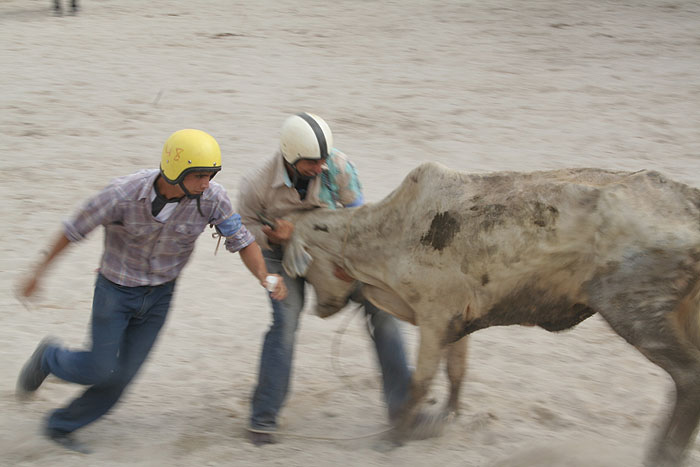 “Experience tends to universally demonstrate that the type of purely bureaucratic administrative organization (meaning the monocratic variety of bureaucracy) is, from a technical point of view, able to achieve the highest degree of efficiency.  In this sense it is the most rational formal means known for achieving effective control over human beings”   —Max Weber

It’s very suspicious that under a regime so intolerant of criticism, anyone can attack — freely and crudely — the bureaucracy.

Isn’t it similar to us behaving like a bull in front of the red cape that encourages us to charge while the bullfighter toys with our fury until we become exhausted?

A bureaucracy can end up becoming an inflexible structure, intolerant of anything new, formalist, conservative and given to braking creative impulses.  Many people agree that such a thing happened here in Cuba.  It acted to strangle civil, popular initiative to the same extent that it bloated the malignant version of bureaucracy, consolidating the “petrified republic,” as Marx called it.

But one must wonder who? – what social subject? – with what administrative and legal means? – with what practice was it able to murder the creative and self-constituting impulse of this people?  “Who threw the chalk?” (as the popular song goes when asking “who’s responsible?”).  Perhaps the bureaucracy itself, or was it only a consequence?

On the other hand we have another phenomenon: Our bureaucracy is not only non-functional owing to its rigidity, due to its being very bureaucratic, but also for being very little: for being irrational, disorganized, arbitrary, too flexible when this suits it and even being corrupt.

In the face of the “political will” of “our leaders,” the Cuban bureaucracy is a weakling and a doormat when the olive greens begin wandering around in circles.  But it’s worthwhile to again wonder who, with their arbitrariness and voluntarism, has allowed our bureaucracy to consolidate itself as a solid and stable institution?

That’s why when from the rostrum “they” point to the heretic (The bureaucracy) so that we participate in its stoning, it makes me think that what “they” are really trying to do is:

—    To get us to spend time fighting ghosts while “they” buy time.

—    To get us to focus on sweeping away the tiny islands of bureaucratic power that still persist, while we leave the field completely open to the advance of the group that today holds a hegemonic monopoly over power.

Until we can do without an administrative bureaucracy, I believe that it’s preferable to clean it up rather than to attack it.  This would bring it into the service of civil society, making “charismatic commanders” stumble and helping to impede dictatorial control by the party from becoming any more than what it is.

One thought on “End the BUREAU, I’ll Take Care of the -OCRACY”