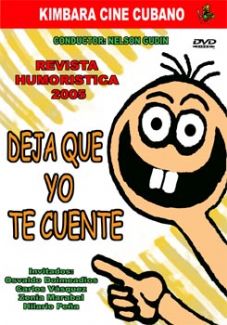 “Let Me Tell You” is not just a comedy show, over the past several years it has become the sole program on Cuban television that has faced up to the most pressing problems confronting our society.

Reflecting our customs, dreams and deepest fears, while expressing the truth in a convivial yet critical style, it steers clear of ending up as an accusatory pamphlet.  In my opinion, it has been the finest of its genre when considering the past 20 years of television programming.

The reality is that people wait for it to come on; and when the eight o’clock news goes off every Wednesday, Cuban families get together for a good laugh seeing their own trials and tribulations.

The way its producers have known how to switch characters, plots and situations at just the right moment —and thanks in great part to feedback from the public— this has made the program an heir to classics that succeeded in sustaining themselves for years without falling into decline; programs like “San Nicolas del Peladero,” “La Tremenda Corte,” etc.

Perhaps these are reasons why this country’s leaders have not openly declared war against the show.  And I’m not referring to all the leaders, only the corrupt ones; in fact, State policies have undergone a series of positive changes in the recent period that point toward greater flexibility in terms of tolerance of all types of opinions.

Although the war faced by “Let Me Tell You” (“Deja que yo te cuente”) has not been open, it has indeed been constant – and I would say even progressive.

In response to this, cancelations of the program have become increasingly frequent.  The news “hour” is sometimes extended, squeezing out the comedy show to make way for the nightly soap opera, and political ceremonies are occasionally shown during the program’s scheduled time slot.

Personally, I feel that the spirit of this program is constructive.  Though the meaning of the word “revolution” tends to confuse people in today’s Cuba; if you think about it carefully, those who are attempting to prevent the airing of this program are the true counter-revolutionaries.

“Deja que yo te cuente” is in fact helping to improve our situation from many points of view.  It improves our spirits; it points out our weaknesses to us; it unites us and proposes roads to progress – all that, and with greater effectiveness than all those patriotic speeches ever did.