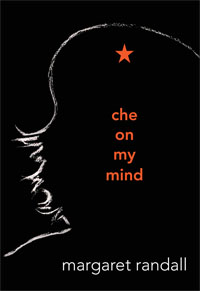 HAVANA TIMES — “This is the story of how Che haunts me,” states Margaret Randall at the outset of her new book, aptly termed “a poet’s reminiscence of an era.”[1].  “His memory draws me to revisit his life, ponder the attraction he exerts long past death and read anew his writings and what others continue to write about him.”[2]

This introduction sets the stage for a series of reflections that alternately encompass personal reminiscence, biography, political analysis, nuggets of historical information, feminist hindsight and even poetry.

As Randall is also well aware, Che haunts many of us, not only Cubans who grew up repeating “Seremos como el Che” (We will be like Che) or those of us who can clearly remember the moment of his death.  “A million portraits painted on walls and cheap T-shirts with his immediately recognizable visage sold in bazaars from Cairo to Siem Riep, and Naples to his own Rosario, Argentina.“[3] Or as Sophia de Mello, the Portuguese poet puts it:

“Before your face
The adolescent meditates in his room
When he seeks to emerge from a world that is rotting.”[4]

In recognizing this fact, Margaret Randall then goes on to ponder some very relevant questions:

Why this obsession with Che’s figure?
Who was he really?
What does his myth say about us?
What can he still teach us about revolutionary change?

Randall gives us a Che of flesh and bones, prone – as all of us are – to the influence of our milieu and the foibles of our own character.  She sums up the qualities that continue to move us: “Touching observations and gestures… his internationalism, his idealism and excessive romanticism…humor, bluntness, commitment, valor, extreme sense of justice…his principled stance with regard to everyday situations and decisions.”[5]

At the same time she doesn’t shrink from noting that he was also single-minded, narrowly directed, impulsive and convinced of the necessity of a military hierarchy and the power of arms in achieving social change.

At different moments in the book, Randall sketches for us the Che of the history books: his early history in Rosario, his meeting with Fidel in Mexico, his heroism during the Cuban struggle, his efforts to lead the National Bank and Ministry of Industry in Cuba, his decision to return to armed struggle as an internationalist, first in the Congo and then in Bolivia, and of course, his final, fateful moments.

She fleshes these out with portraits of the women in his life: his mother Celia de la Serna; his first wife Hilda Gadea; Aleida March, his second wife, widely considered the great love of his life; and Haydee Santamaría, his friend and soul-mate.  Tender quotes from his letters to these women (“…I love you as I recall our bitter morning coffee, the taste of the dimple on your knee, a bit of delicately balanced cigar ash…”)[6] remind us of Che’s power of language and extraordinary sensibility.

There is also space devoted to “Benigno”, the young campesino Che taught to read in the Sierra Maestra and who followed him into the final struggle and beyond, much later becoming disillusioned with the Cuban power structure. She touches on, but doesn’t dwell on, this and other controversies Che’s life has spawned: Did Fidel betray him?  Was his death avoidable? Was the Bolivian campaign merely a mistake and a failure?

Randall examines Che’s thoughts, actions and legacy through her own “multiple prisms”: as a feminist; as a participant in later, more decentralized social movements; as a person who questions the value of violence.  She later adds the perspective of religion and of literature.  This is not to say, that she loses her way – to the contrary, she returns time and again to her central questions: Who was Che?  Who might he have become?  What is his true legacy? And the very personal: Why does he still fascinate me?

Writer, feminist, journalist, poet, social activist:  Margaret Randall is uniquely suited to address these questions. Born in North America, she traveled to Mexico in the mid-sixties where she and her Mexican husband founded a bilingual literary journal.  She traveled to Cuba in 1967 and then moved there in 1969, remaining there for over eleven years.  Following several years of residency in Nicaragua, she eventually returned to the United States in 1989 after a court battle to regain her citizenship[7].

With well over 100 published works to her credit, she has been a vital participant in enormous, and sometimes violent storms without ever becoming strident, dogmatic, or – its opposite pole – cynical and disillusioned. Though she never met Che, the setting which formed the background to his life is one she is familiar with and well prepared to guide us through.

This book is not at all a political treatise, nor is it a personal memoir. Randall herself compares it to the 30s tune: “Georgia on my mind,” saying that she wishes to evoke that “spirit and wandering rhythm.”[8] To me, the tone and style make it more comparable to a rich, sometimes rambling conversation where moments of intense and passionate conviction alternate with personal anecdotes, insights or unanswerable questions  in a way that is occasionally disconcerting, but more often rewarding.

Some of the most interesting thoughts, questions or nuggets come in unexpected places: the middle of a chapter, towards the end of a paragraph, taking one by surprise.

As with any good conversation, this book leaves the reader stimulated and enlightened with new questions to ponder.  As someone largely familiar with Maragret Randall through her books of interviews, it left me curious to read her more autobiographical work, To Change the World My years in Cuba, as well as to reexamine some of Che’s thought and works.

It also left me with the desire to make contact with all the young people I know, show them Che’s portrait and ask” “Who is this?  What did he do?  What does it mean to you?”

I did wonder from time to time if this book is understandable and accessible to those largely unfamiliar with the details of Che’s life.  Margaret Randall, on the other hand has been very clear that this kind of explaining or education is not her intention with this book.  Instead, we are simply listeners, treated to a very rich personal rendition of her own private tune of Che on my mind.

[6] Randall’s translation from Aleyda March, Evocació, quoted in Randall, Che on my mind, 45.

(*)  Che on My Mind is published by Duke Press