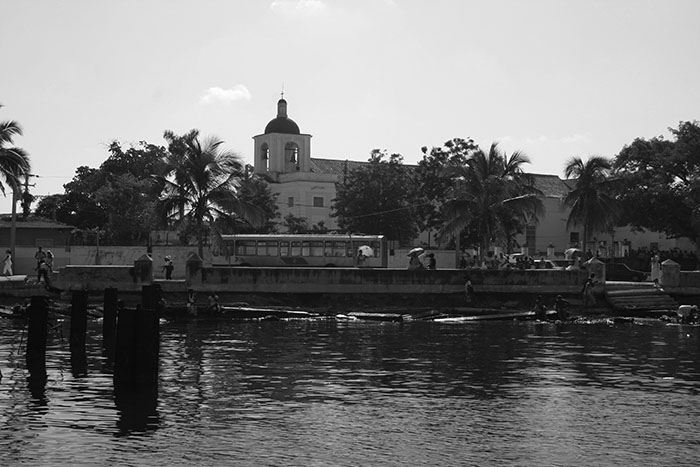 HAVANA TIMES, Sept. 25 — The Catholic religion and religions of African origin have coexisted since Cuba’s colonial days, the Catholic belief with its saints and writings while those of the black slaves brought from Africa only with language.

In this sanctuary erected for the Virgin of Regla, syncretized with Yemaya, the virgin is included in the largest altar that came from Spain at the end of the 17th century, which is a copy of the one worshipped in the monastery of that same name in Chipiona-Cadiz.

As legend holds, this image belonged to San Agustin, a great African saint of the fifth century who founded an organization of Christians who followed reglas (rules), or a series of norms devised by that same saint.  Due to a whole series of circumstances, the image ended up in southern Spain, where it was discovered at the beginning of the 15th century.

With the advance of the Christian kings’ conquest toward the south of Spain, with them were regular canon missionaries of San Agustin.  It seems that these were the ones who carried the image of their Regla, which currently is worshipped in Chipiona.

In the 16th century, from Andalusia came colonizers, and with them their devotion to the virgin.  To one particular individual who is traditionally identified as Manuel Antonio, or “the Pilgrim,” is owed the origin of the current sanctuary.  He built a chapel here and put up the portrait of the Virgin of Regla in 1682.

This chapel was destroyed by a hurricane in 1692, however there appeared another Spaniard, Juan de Conyedo, who was afraid in the face of the furor of a storm while he traveled by sea from Caibarien to Havana.  He promised the virgin to build another chapel with stronger materials and a better structure if survived.

He fulfilled the promise and soon after a military officer brought the current image from Madrid, replacing the previous one.  The black color of the figure apparently has no type of ethnic motive.  It was due simply to the fact that in antiquity devotees liked to represent their images in fine woods, which were usually black-colored ebony. 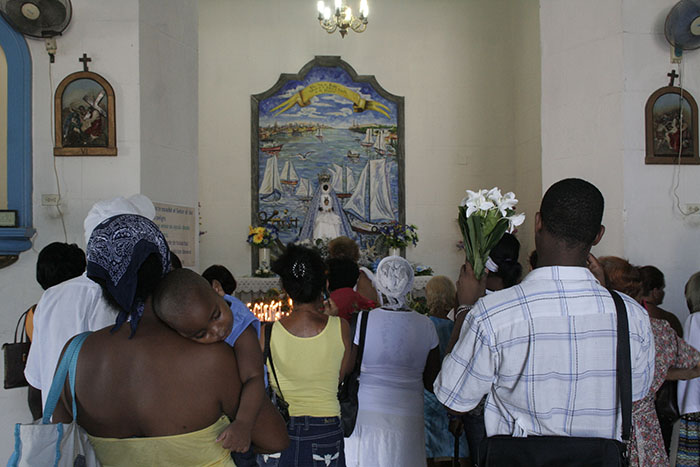 Since those remote times the Virgin of Regla has been worshipped with great faith by most Havanans simultaneously.  They relate her to the world of the sea, following the tradition from Chipiona where the sanctuary is in front of that town’s beautiful beach.  That of Regla has a privileged position since it was built facing the Morro Fortress; therefore when ships arrived in Havana, the chapel was the first thing that met their eyes.  It was like a sign of protection and the maternal affection with which they were welcomed.

A sign of this affection by Havanans is the fact that its town council solemnly declared the Virgin of Regla as the patron of the port of Havana in 1714.  Likewise, in 1957 the figure was crowned in the Cathedral by Cardinal Arteaga1 in an equally solemn ceremony.  The current temple, built at the beginning of the 19th century, is visited by pilgrims especially on the days of its festive celebrations: September 8 and the eighth day of every month.2

The Virgin is a syncretism of the two religious cultures.  It emerged in part from blacks who were ripped from their lands and their cultures, as well as separated from their families and social groups to make their subjection more effective.  They only brought with them their gods and their Orishas.  This explains the current religious syncretism between Christianity and African religions.  In this way, the Virgin of Regla (who is Mary, the mother of Jesus and the mother of all Christians) syncretized with Yemaya perhaps to be this Orisha of the waters, which is also known as the virgins of Caridad, Meced or Carmen.

1 On February 24, 1987, the EXCMO Monsignor Jaime Ortega Alamino, Archbishop of Havana, consecrated the altar and the temple.

2 This data is from pamphlets that are distributed within the sanctuary.

One thought on “Cuba’s Regla Sanctuary”

Susana Baca – Song of the Day

Nicaragua and its Bogus Elections

My Fourteen Hours Waiting for a COVID Shot

Record Number of “Escapes” from a Cuban Baseball Team