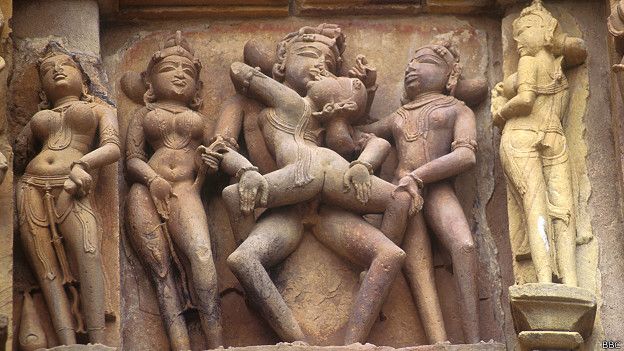 Based on these ancient cults, it is assumed that paleolithic figures of Venus, such as the Willendorf Venus, evoked human admiration for the genitals, motherhood, fertility and eroticism, through breasts and buttocks of exaggerated proportions – with a possible intention to represent pornography.

In Indian culture, especially within philosophies such as that of the Tantra, it was understood that sex was a part of human divinity and at times represented a path towards spiritual enlightenment. The Kama Sutra of Vatsyayana (400-200 BC) is the epitome of sexuality in Ancient India.

The classical societies of Ancient Greece and the Ancient Roman Empire adopted human sexuality as the basis of artistic expression. The representation of sexual scenes was common in these civilizations; one example being the details in the frescoes of the suburban baths of Pompeii, where scenes with sexually explicit acts are appreciated – including the representations of group sex, homosexual and oral sex.

The explanation of this phenomenon became evident since the implementation and increase of Wi-Fi points in the country as of 2013, the reduction in navigation rates in 2015 and the enablement of access through mobile data in December 2018. Therefore, the consumption of pornography in Cuba is under new conditions caused by increased internet access.

When the cost of Internet browsing is as high as it is in our country, any tool that promises to speed up the process and optimize our search is a treasure. Telegram, the application developed by the Dúrov brothers – launched in 2013, provides the user with a huge amount of multimedia content in the most automatic way possible.

In 2015, the application incorporated the “channels” service. Through this option it is possible to send all types of files on a massive scale; allowing users to subscribe in an open and unlimited way. These channels can be found on the web via a URL – being able to access the entire history of sent messages.

At the end of the year 2019 there were hundreds of Telegram channels where pornographic content was shared. By subscribing to one of these channels – The Bots – the virtual assistants of Telegram, a board of options is shown with the most diverse sexual content.

In this way, the user can select the variety of his or her preference, and the bot redirects him or her to the videos of that category. This process saves the user considerable navigation time trying to find and select the specific content that they are looking for.

The human being is, in general, highly sensitive to visual stimuli, the inclination to observe sexual scenes is an innate characteristic. The areas of the brain that are activated when watching pornography are the same that are stimulated during sexual intercourse, the brain releases dopamine, a neurotransmitter mainly associated with the anticipation of reward that also acts in the programming of memories and of information in the brain.

There are conflicting opinions about the morality of pornography; a sector of society condemns it for its commercial nature and because it can trigger an addictive and therefore harmful vice for the individual.

However, a current train of thought considers it an art form, in order to show the beauty of human sexuality. Some defend this precept by arguing that it is a form of freedom, and that it is fundamental to the evolution of a society free from prejudices and taboos.

All of the 20 young people surveyed, confessed to having accessed pornography, 55% of them being women, thus demonstrating that females, who historically represent a smaller percentage, are also consumers of this industry. However, there are few those who dare to admit it – as they remain subjugated to the social prejudices of yesteryear.

“Pornography satisfies each of the prerequisites for neuroplastic change. When pornographers boast that they are going one step further by introducing new and stronger themes, they forget that they must do so because their clients are developing a tolerance to the usual content.”

The current Law no. 62 of the Criminal Code of Cuba (Art. 303, subsection C), penalizes with a penalty of deprivation of liberty ranging from three months to one year, or a fine of 100 to 300 installments to he who “produces or circulates publications, prints, film tapes or tape, recordings, photographs or other objects that are obscene, with a tendency to pervert and degrade customs. ”

What are those objects? What is considered obscene? What can pervert and degrade customs? Which customs? As much as the State tries to keep Cubans outside of the “obscenities” considered improper in the socialist system, the ports of entry always mocked them. If not, how did Playboy magazines and graphic-erotic novels enter the country? And the “original” movies on VHS, with their covers illustrated in colors?

The most alarming of these figures is that if we take into account that we are talking about the 90s and the beginning of the 2000s, when the access and distribution of pornography was negligible compared to the current levels, it can be speculated that the percentages are much higher in children and adolescents today.

There is, at least not legally or publicly registered, any mechanism for the Cuban telecommunications company – ETECSA, to regulate the consumption of pornography – especially the consumption among minors.

These mechanisms could be aimed at identifying the mobile devices of children and adolescents to restrict access to this type of material, create alert generation systems before the attempt to access these devices, by sending notifications to parents, encouraging the use of parental control tools.

These actions could be considered duties of the company with respect to consumption via the Internet. The rest would be the responsibility of families and school institutions, although controlling all distribution channels among minors is practically impossible, especially when there are very popular alternative channels in Cuba, such as Zapya, a mobile application for wireless file sharing, or the USB copy.

The scenario demands to modernize the regulations. It is absurd that the production and distribution of pornographic material is penalized or that its exhibition in theaters is censored and its entry intended to be controlled from abroad, when the Internet remains an open and increasingly popular channel in Cuba, as in the rest of the world, for all those activities.

It’s necessary to admit that the consumption of pornography in Cuba is a fact; open your eyes to the reality of what has been going on for decades and that it is gaining more strength in the face of the internet’s rise and access in our country.

Instead of masking the truths and trying to avoid the tarnishing of this false image of ‘the preservers of good manners and morality’, it is imperative to adapt regulations and laws so that they themselves may adapt to the times we are living in, and thus work so that the explosion of multimedia does not foment crime or especially affect children and adolescents – the most vulnerable to all these changes.

4 thoughts on “Pornography and the Internet: Its Impact on Cuban Society”