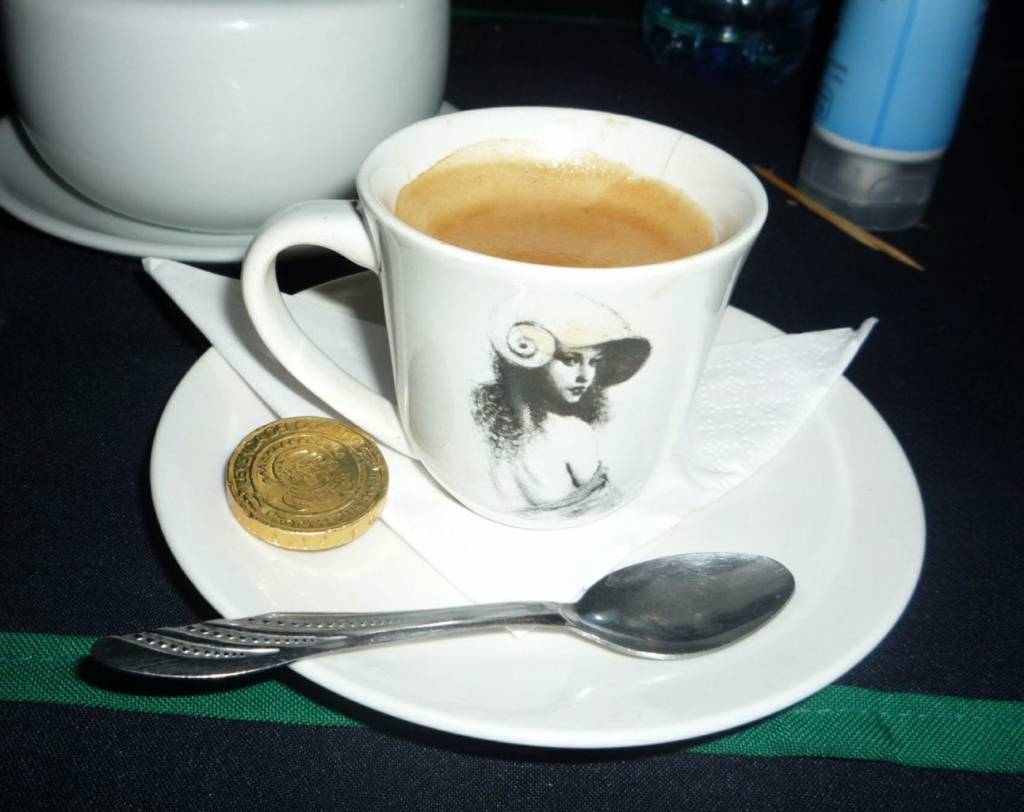 Caliente (Hot), Amargo (Bitter), Fuerte (Strong) and Escaso (Short). This is the coffee that we Cubans drink. With a glass of water, that you drink before… so that you are left savoring the taste of coffee in your mouth, and smokers drink it with their cigar or cigarette.

HAVANA TIMES – I have bared witness to this unique ritual ever since I was a child, when I used to go out with my uncle and my father, normally on our Sunday walks from our family home in Central Havana to Galiano Street, in search of “El Brazo Fuerte”, that wonderful bakery in Havana where they used to make bread from all around the world and the most delicious meat pasties that you can imagine.

My elders used to ask for a glass of wine and chat with the sales assistant (another lost tradition, in spite of this so-called “personalized service” marketing ploy used today). Back then, it was genuine and just a friendship over a counter, cemented over the years between the employee and loyal customers. They used to ask if everyone in your family was well, they talked about the baseball game, politics and they would come up with solutions to world problems until it was all sorted.

Then came the famous coffee and my uncle and father would always drink a very cold glass of water beforehand, as both of them were smokers. One day I dared to ask why they did this and their response (somewhat taken aback by my 12-year-old ignorance), “Well, to keep the taste of coffee, of course.”

Back then, coffee used to cost three cents, the meat pasties were five cents and bread was more expensive, costing 10 cents. Nothing compared to prices today, which bore a hole into the pocket of any ordinary Cuban who earns in national Cuban pesos.

When people talk about Cuba as a destination, there are three important things, as well as its beaches: Rum, Tobacco and Coffee. As well as the island’s natural attractions, its culture and history, these three elements are also protagonists and they have become icons in their own right today, even though it is claimed that coffee originated in Abyssinia (Ethiopia today), in Eastern Africa.

Different studies assert that coffee arrived in Cuba thanks to the Spanish, after their first settlements between 1492 and 1530, and as the geographic conditions of Cuba’s eastern mountains favored its production, coffee began to be cultivated and its consumption took deep root in the native population. 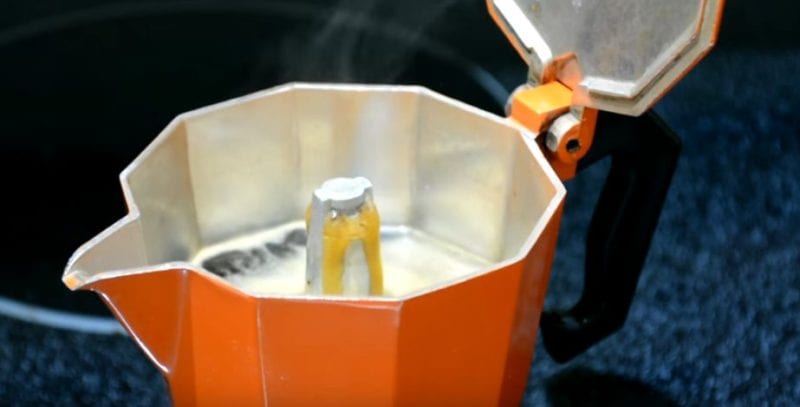 Normally, it was filtered using a kind of funnel made out of fabric. Water, along with (a small amount of) sugar, was boiled in a pan and then the coffee powder was added and poured into the filter, letting only the black liquid through, with a unique taste that continues to distinguish it even today. Many Cubans had the habit of filtering coffee dregs, which was called “zambumbia”, and people would drink it with crackers or bread.

Then in 1933, the “Italian” coffee pot was invented, which revolutionized the world of coffee. Everybody wanted to have one, Cubans weren’t the exception, and they have been an indispensable item in Cuban kitchens ever since then, beating even electric coffee machines and modern capsule machines, which ordinary Cubans also can’t afford.

Today, Cubans normally filter coffee without sugar. Some people put sugar in the coffee pot after it’s been filtered, others prefer to let people add sugar to their own liking once it’s been served. Homemade Cuban coffee isn’t normally as frothy as an expresso, it is a lot stronger than US coffee, you drink it without milk, it isn’t a cappuccino, and it is so different, so unique, because it tastes like a bit of everything but there’s nothing else like it.

Not Nescafe or a Cappuccino

It’s no wonder that even with foreign products which people love so much outside of Cuba (which come to the island from time to time after the dollar economy took off), Cubans continue to prefer dark, concentrated, strong coffee. Not decaffeinated, not Nescafe, not a Cappuccino… that’s for tourists and an Americano is considered flavorless water in Cuba, for US citizens… or whoever else can drink it without gagging.

Having tried many different types of coffee from all over the world, from pure 100% Colombian or Brazilian coffee to Jamaica’s famous “Blue Mountain” coffee, I can testify that nothing tastes like the coffee we produce in our mountains in Oriente. 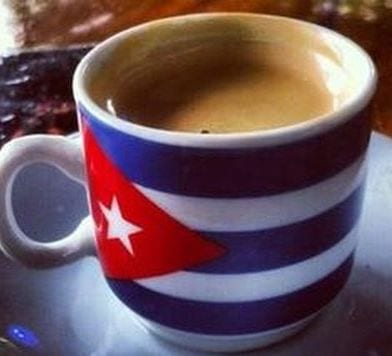 Of course, most of our people don’t drink pure coffee, as our coffee, our daily coffee, which we buy at the bodega store at a subsidized rate (two 4-ounce packets per month per person), is mixed with roasted and ground chickpeas. However, it’s interesting to note that even this coffee, if filtered properly in an “Italian” coffee maker, usually tastes good to most consumers. The most astute serve the first coffee that it makes, really black, and then they put the coffee pot back on so that it filters the dregs and makes a lighter coffee.

There are even people who have perfected ways to make coffee with chickpeas taste even better: You never throw away the dregs from the old coffee, you boil them in the pot again, and this “flavorless water” or “zambumbia”, from the old batch is used as the water in the new batch… And believe it or not, it makes even stronger coffee!

Other people are more technical and if they have a coffee pot that makes coffee for 6 people and only 2 or 3 people are going to drink it, they put three or four marbles (the kind kids play with) into the small part of the pot. This is because the small part of the pot needs to be completely full, otherwise it won’t filter the coffee properly. The marbles fill the empty space when you are only making coffee for three people. My good friend Zenaida taught me this, back in the ‘70s, when national efforts for the “Ten Million Ton Sugar Harvest” (which didn’t even reach nine), led to greater shortages.

However, today, when Cubans “stumble across” a packet of “pure” coffee, whether that’s Serrano, Cubita or Pilon (with prices in CUC, equivalent to the USD), any coffee-loving Cuban sees the skies open. There are even Cuban blogs that have similar names (Cafe Fuerte, for example). And a video has even been made which begins with the protagonist filtering “Monte Rus” coffee. The video was called something else, but nobody can remember the original name. Everyone knows it by the name of the brand now.

On the other hand, it’s strange to see that there are coffee brands like Altoserra, which is cultivated in the mountain ranges of our eastern provinces Guantanamo and Holguin, which are being sold more and more frequently on international markets like in Canada, Japan, the UK, France and Germany, even in distant Australia, according to an announcement made on Cuban radio station Radio Reloj, even though coffee is rationed here in Cuba.

Thus, good coffee forms a part of Cuban traditions. Coffee is what people offer you when you go to their home, before offering you a swig of rum, even in homes where there is an “alcoholic culture”. “Sopa de gallo” (coffee with rum) was also invented here in Cuba. Not to imitate a long black coffee with cognac which people drink in other countries, in opposition to this in fact.

Even today, many years later and thousands of kilometers away, I sometimes surprise myself and ask a delivery man with a package from Amazon (who also sell Cuban coffee by the way), if they want a coffee. He or she look at me perplexed and then they smile and say: “thanks but I’ve already had breakfast.” Because here, like in many other countries, you don’t normally offer anything to delivery people. 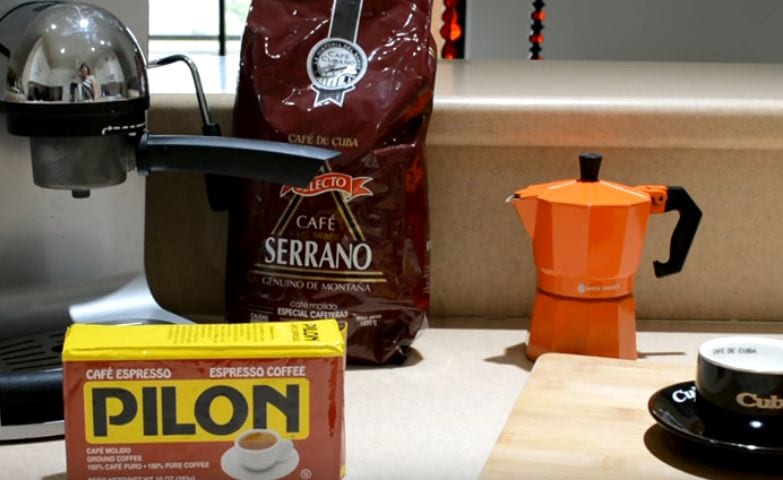 But to be perfectly honest, I did know somebody who half-resolved the dilemma of continuing to invite visitors in spite of shortages when the rationed coffee crisis began, and we still didn’t have stores selling in hard currency in abundance. When somebody came around their house, the wife would attentively ask: “Man, shall I make coffee?” and the man, a hardened coffee-drinker would give two different answers: “Of course, woman, of course,” if the person who had just come was somebody they didn’t know or not very important in their friendship or neighborly circle. But, if it was a relative or a good friend, he would say: “Of course, woman, of course.”

Even coffee cups have their own tradition here. In Cuba, most coffee-drinkers have their favorite small shot size cup, from the humble tin cup which has been in the family for many years, to the small glass one that has a porcelain rim.

In short, Cuba is an island with coffee everywhere, even today when 3 cent coffee has been replaced by a tiny glass which costs at least 1 Cuban peso, at improvised stands which sell this drink from any house window that leads out onto the street, or 0.50 CUC at any more or less pretentious cafe in Vedado or Old Havana.

And for those of you who want to learn how to make Cuban-style coffee, there are loads of videos on YouTube which show you how to!