HAVANA TIMES, July 13 — Almost two months ago I decided to get my hair cut again after having worn it long for three years.  That day I got it cut in a barber shop in the downtown Vedado neighborhood.

On Friday, I went for another cut but this time to a barber’s in my outlying municipality, Arroyo Naranjo.  It’s a small shop where two barbers work.

A conversation began because one of them heard something interesting on a national radio program:  “To combat carcinogenic cells and to slow the aging process, it’s important to have a diet rich in apples.”

“What made them say something like that on the radio?  Eating apples in Cuba is a luxury?” commented the barber, who I’ll call Mario.  I told him that I eat an apple every three or four months.   “Your lucky.  I’m usually able to eat one every six months, but with this new work system I’ll probably be eating only one a year,” he added.

I was astonished.  Three or four years ago, when I got my hair cut at this same place, the barber shop belonged to the state.  At that time the workers received a fixed salary, and they had a boss and a defined work schedule.  The electric clippers and straight razors they used were required tools, but they had to buy and maintain them out of their own pockets.

Since February they’ve been renting the local from the state.  The government rents the shop and its two barber’s chairs to them, while each one of them has to pay 1,000 pesos a month in domestic currency for rent, taxes to ONAT and payments into Social Security.  They also have to pay the utilities (water and electricity) consumed by the business.

The balance of the revenue goes to the wages that month.  They don’t have a boss and they aren’t accountable to anybody; if they decide to take a day off, nothing happens – as long they come up with the 1,000 pesos they’re required to pay every month.  I was sure that this system would be better for barbers, hairdressers and manicurists.  However, it seems I was mistaken.

Omar (the other barber):  “The problem is that previously we took in maybe a thousand pesos in the month.  We would give the government eight hundred pesos and they would pay us a wage of three hundred.  Plus, we didn’t have to pay water or electricity.  But now the taxes are sky-high, and on top of that we have to pay the utilities.”

HT:  But how many clients come in per day? And how much do you charge?

Omar:  “We get maybe nine, sometimes twelve, but remember there are two of us, so we each get about half of the customers. The government didn’t set the rate, but neither did we.  People pay ten or fifteen pesos, it fluctuates somewhere around that.”

I did the math.  With each of them averaging six customers per day, and each of them paying 15 pesos, this would come to 90 pesos a day.  In the week the barbers take in 540 pesos and 2160 pesos in month.  After paying the state they would have 1160 pesos, out of which they have to pay the water and electricity.  The electricity consumption isn’t low since the clippers operate on electric current, the fans have to stay due to the hot weather and then there are the lights and the radio.  Omar and Mario are responsible for buying parts and accessories for the clippers, as well as getting them repaired and replacing them when necessary.  They also have to spend money daily on lunch.  Still, the figures didn’t look that bad; they should have been each making something like 600 and 700 pesos each (the average wage in Cuba is around 425 pesos)

Omar:  “That would work if twelve people came in every day; that’s to say six for each chair.  But sometimes we only get four or five a day.  And almost nobody pays fifteen pesos.”

Before my turn came up, Omar cut one customer’s hair and Mario two.  The three paid ten pesos.   Finally, I got into Omar’s chair and continued asking them both questions while he used the clippers on my hair.

HT:  Can’t you guys each cut more hair when you get home and make some extra money?

Mario: “I can tell you that all the manicurists I know — people who worked for the state and who started renting — they quit and started working out of their homes.  They came out better as self-employed, but not renting from the state.” 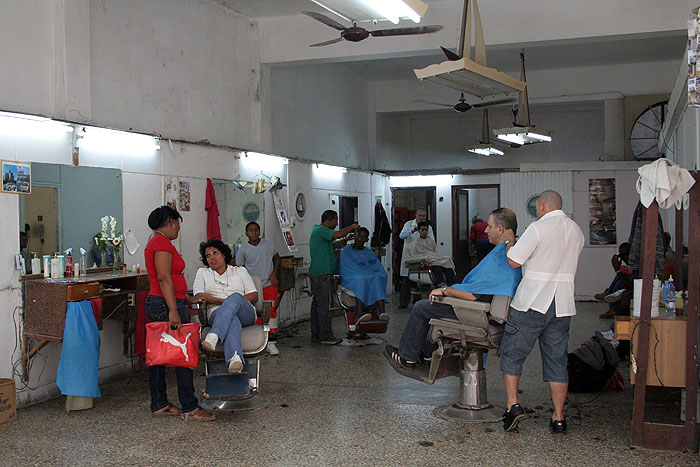 HT: But you guys haven’t protested?

Omar: “Sure, of course.  We’ve sent letters, and we protest each time the inspectors come through.  People have also raised this in meetings with Popular Power (city council) and the state-run company we rent from… The best thing is that they’re aware that they calculated poorly and therefore taxes are too high.  We like not having a boss or a fixed schedule, and it’s only right to pay taxes to the government, but having to pay this much in taxes is killing us.”

Mario: “Nothing.  First they circulated information saying they’ll reduce the taxes, but later they said that this had been a mistake.   The hairdressers that rent protested and their 1,000 peso obligation was reduced to 880, this was because they only got water every four days.  But it’s still a lot.  You have to realize that they have to buy all their products.”

Omar: “They say that in the future it’s possible that the taxes will be reduced, but for this to happen three ministers have to get together:  the ministers of Finances and Prices, the one from Domestic Trade…and…well I don’t remember the other one.  In any case, they would have up to a year to decide and sign the paperwork that allows the lowering of taxes.  And in the meantime?”

Mario: “There’s another detail that you don’t think about when adding it all up. It’s not the same thing to work in a barber shop in upscale areas like Miramar, Playa or Vedado as it is to work in Diez de Octubre or Arroyo Naranjo.  Notwithstanding, they’re making us all pay the same tax.”

I remembered the afternoon that I got my hair cut in a barber shop on Vedado.  Behind me in line was a foreigner who was a regular customer of the barber who cut my hair.  No foreigner pays ten or fifteen Cuban pesos for a haircut; much less if he/she is a tourist.  The minimum they’ll pay is one convertible peso (equal to 25 regular pesos).

Last Monday I planned to get my hair cut at that same place, but the barber was late.  Behind me appeared a foreigner, though not the same one as the previous time.  I waited a while but in the end I decided to leave. The foreigner had time and stayed there waiting.

HT: In the time you’ve been here, how many times have you cut a foreigner’s hair?

Responding to me almost in chorus:

HT: If the situation is so difficult, why don’t you both go home and work as self-employed barbers?

Omar: “It’s not so easy.  I’ve been working here for years, so all my customers are here around me. If I go to my house I’ll have to create a whole new clientele.”

Mario: “Me, I don’t worry about that. It’s true that the first months are difficult, because people have to get to know you to realize that you do a good job.  But I’d be willing to take the risk.  My problem is that at home I don’t have enough space to cut hair, so I’d have to rent space from someone.  That’s a problem too, because anyone who’s going to rent you their front porch is going to want to charge you an arm and a leg.  And if one day they don’t want you there anymore, they can just make you shut down and leave, that simple.”

HT: But here men don’t only come for haircuts.  I’m sure that some of them want to get shaves, and like that you could charge them a little more.

Omar: “We can’t give shaves because the chairs that come included in the rent have problems – they don’t lean back.  Also, there’s no water here.”

HT: Ah, but don’t you have to pay for water.

Omar: “That was another problem.  Imagine, when they came to us with the contract for water, he (Mario) explained to the guy that for years there have been problems with water in this building, and because of that we don’t have any either.  Still, the man wanted us to sign the contract, because that’s his job.  In the end, we didn’t sign the contract and we’re not paying.”

Omar finished cutting my hair and the moment to pay arrived.  My hair looked perfect, as did that of all the previous clients.  But they paid ten pesos, so I didn’t see any reason to pay more – I’m not rich either.  Still, at the last moment, I pulled out another five peso bill.  Omar simply smiled out of gratitude.