HAVANA TIMES – For many years now, cancer has been one of the leading causes of death in Cuba. Early detection can prolong patients’ life expectancy and there are many important people who help to deal with the illness during that time who hardly ever get mentioned. Lazara Medina Rodriguez is 55 years old and has been looking after her mother who had rectal cancer surgery five years ago.

HT: What was the lead-up to your mother being diagnosed with cancer?

Lazara Medina: She was a very active woman. She was always busy doing household chores. She liked to go out in the neighborhood, to talk to neighbors, stand in line to run errands. All of that started to change as soon as she began to feel tired. She lost weight, she would have regular headaches, she spent a lot of time lying down.

HT: Did you go to the doctor straight away?

LM: This really did happen quite gradually. Sometimes, when you live with someone, you don’t see how they wither away clearly until someone you know opens your eyes. A cousin came to visit and she was the one who noticed how much weight my mother had lost. It was as if I had been blindfolded. We went to the doctor immediately and they thought that she might have diabetes, but they sent her for tests to find out why there was blood in her stool.

HT: What happened after she was diagnosed?

LM: When the doctor explained the situation to us, it was like a blow, I couldn’t stop crying. I cried for my mother who didn’t deserve to go through this, but I also cried for myself because I knew that my life was going to change drastically.

HT: How did your mother take the news?

LM: She was so fragile that my brother and I decided to hide the truth from her. When you don’t want to think about something, you avoid it at all costs. To tell you the truth, my grandparents and one of my aunts died from cancer. My mother was always very constipated, sometimes she would go days without going to the bathroom, and when she did manage to go, she would have cramps. Luckily, the operation was a success. She had a colostomy, which is like putting an artificial anus outside your body. The doctors were very kind. Of course, she is a very special old woman. But, I can tell you that even the care and attention she received from nurses was the best.

HT: And what happened once you got home?

LM: A colostomy is like being castrated. The sick person has to forget that they have an orifice to defecate and stop using it; it sounds easy but it isn’t. My mother was pushing for a long time, it was hard for her to stop doing this. Showing her the pouch where her stool would end up was much worse.

HT: Was the adaptation process tough?

LM: Terrible, not just for her. In the beginning, the skin around the orifice used to burn. The pouches have a rubber band on them that sticks to the skin. It was very painful for me to watch her suffer. It takes the skin a while to accept the pouch, then you have to learn how to use it.  Me first, I was so nervous that the first few pouches went straight into the garbage. You have to have a steady hand to cut around the circle that will stick to the orifice. Then, you have to know how to put the clamp on to stop the contents from spilling out. It was very stressful. Then, months went by before my mother could put the pouch on and take it off by herself.

HT: What did you feel the first time you had to change the collection bag for her?

LM: It was a great challenge. You have to love someone a lot to do something like that. I owed it to my mother. She had to clean many stairs and doctors’ offices to feed my brother and I. She was a fighting mother. It was my turn to do something for her. I used to hold my breath and keep my nausea in check so as not to hurt her feelings. Lots of times, the bag would open and the waste would spill all over her and the bed. 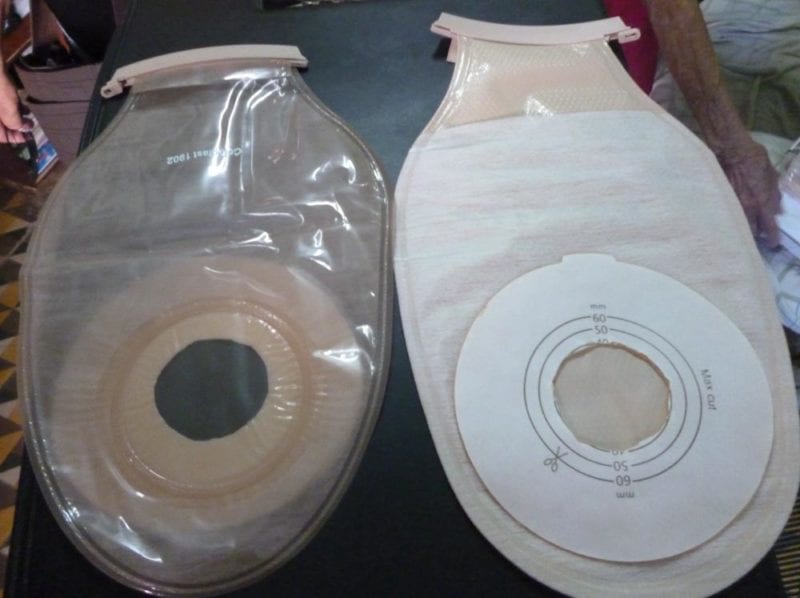 HT: How did she react to this new life?

LM: For a strong woman, used to looking after herself, it was very painful. Not just the shame and humiliation she felt for herself, but for me too. She felt dirty all the time. No matter how many times I told her she didn’t smell bad, she used to smell it. I would bathe her three times a day, perfume bottles didn’t last a week, I would wash her sheets, clothes and shoes non-stop. One day, she told me that she would put on the bag herself and from that moment on, I just prepared them for her. Clothes were another dilemma. She was always a woman who took great pride in her appearance, but she began to wear baggy clothes which she didn’t like most of the time, or didn’t look nice in, but the most important thing was that they didn’t put pressure on the pouches because they could leak.

HT: What happened at your job?

LM: I had to leave, it was impossible for me to work and know that my mother was alone. I spent the first two years cleaning the house and her clothes all the time, washing my hands. It’s sad to see that in a country where most of the population are heading towards 60 years old, their children don’t earn wages that allow them to look after their parents. I have my husband, but what about those women who have to look after their parents alone? Where are they going to get soap, detergent, bleach, and the fruits and vegetables which are very important for their diet, as well as chicken and fish?

HT: When colostomy bags run out, what happens?

LM: When the pouches that we get at the pharmacy begin to run out and you can’t buy them on the street, then you have to reuse them. I have been lucky for now. My family have pulled their weight and someone always turns up who sells the pharmacy’s bags because they get them from abroad; or someone dies and the family sells their bags, or even just give them to you if you are someone they know. However, I know old people who use plastic bags.

HT: How’s your relationship with your husband?

LM: Care-givers live very stressful lives, if anyone tells you anything different, they are lying. My mother is 86 years old and it’s been five years since she had her operation. I have had to go through things you can’t even imagine. Let me tell you that there are no words for the water situation in Central Havana, for example. Just imagine if you don’t have water for two or three days and you’ve got dirty clothes because the pouch came off in the early morning or in the day. Or if you mother needs to recycle the bag and gets the sink or the water tank filthy. A care-giver is on the verge of a mental break-down, they lose their temper, they shout and there isn’t much before they become abusive. I am lucky, I’ve had my husband’s support, not just financially, I believe I would have lost my mind if it wasn’t for him. Although, who knows, maybe I’m already crazy and I still haven’t figured it out.