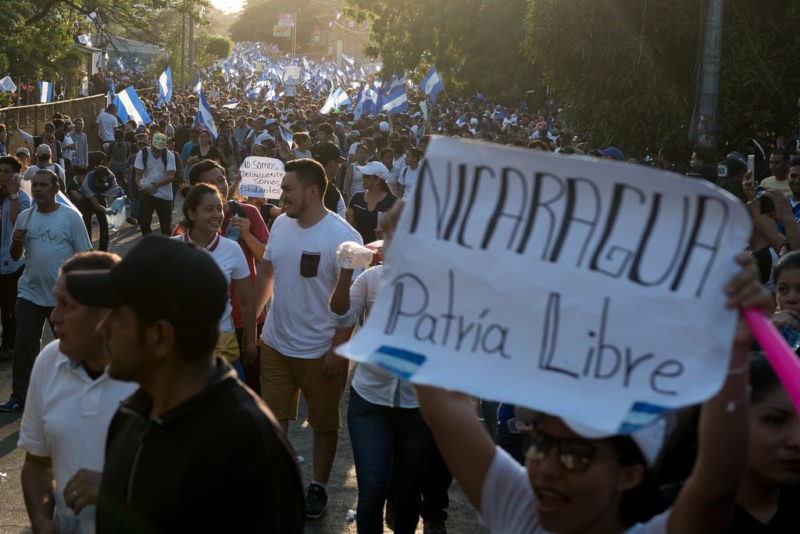 HAVANA TIMES – In social networks the actions of the most representative confluence of the national political scene are criticized: The Civic Alliance for Justice and Democracy (ACJD) and the Blue and White National Unity (UNAB), arguing that, the first has been kidnapped by the interests of business people and the second has been monopolized by the Sandinista Renovation Movement (MRS) under some sort of political opportunism. Failure to carry out more forceful actions is attributed to both.

To make a description and analysis of the way the opposition to the Ortega-Murillo regime is composed, to give us an understanding of positions taken, the political stance and the strategies executed by different groups in the internal struggles, is fundamental at this time in which there is so much talk about unity as the panacea to the departure of Ortega and Murillo.

Prior to April 18, 2018, the Ortega-Murillo regime was supported by a series of national and international actors, among whom were high-ranking leaders of the Catholic Church, the organized private sector and the international community, more specifically the Organization of American States (OAS). It was supported by the consent of a significant percentage of citizens who positively perceived and appreciated the public-private alliance, or COSEP model, that made the economy grow, but sacrificed democratic institutions.

The April massacre began to change everything. The outrage mobilized a large number of citizens to the streets. Rapidly, a) an emptying of the State, its institutions and institutional procedures was carried out; b) there was a change in the political correlation between social forces; c) an inter-class and heterogeneous social block was formed that claimed for itself the representation of the popular will with many voices and tried, from outside the institutional sphere, to challenge the political power of the regime; d) finally, the coalition of actors linked to the dictatorial regime began to break apart.

In this way, given the rupture of the institutional frameworks, two privileged spaces emerged as extraordinary frameworks where, in an open and not so veiled manner, power is fought for in a contest that finds the political space between the Ortega-Murillo regime and the Blue and White people simplified: the streets and the National Dialogue.

So the CEN (Episcopal Conference of Nicaragua) convened a series of highly relevant actors to serve as counterpart to the government delegation in the Dialogue process. Among them were students, peasants, business people, activists of civil society and the university sector, among others.

As stated by Sidney Tarrow, an expert in social movements, when there is a break in the bosom of the elites this not only motivates citizens to venture into collective action but also segments of the elite itself that are not in power. In the case of Nicaragua, after the rupture of the Alliance, Dialogue and Consensus Model, the business sector organized in COSEP and other political elites opposed to the regime, self-assigned for themselves the role of “tribunes of the people.” They did so, they spoke on behalf of large crowds that were demonstrating against the regime in the streets. The case of the students and the peasantry was an exception.

So which were the sectors that formed the Civic Alliance? Was there an agreement between those who were dialoguing in the saloons and those fighting behind the barricades in the streets? Did they have a capacity of their own to pressure Ortega and maintain a favorable position in the political correlation of forces both internally and internationally?

Probably two sectors are the most questioned: the business sector and the student sector. First, the business sector organized in COSEP, which for years was Ortega’s strategic ally, found itself in a dilemma. On the one hand, it perceived that the autocrat was a factor of instability in the short and long term. His repressive actions against the unarmed people broke the confidence of economic agents and with it the investment climate. Likewise, Ortega was still the “strong man,” capable of holding back the most radical positions and exploits of the opposition under the fear that “heaven could be taken by storm.”

Far from this, the business sector and more specifically big capital embodied in the advisors of COSEP, already distanced from the toughest positions of the autocracy, constituted, a kind of reformist faction with the desire to change the old Ortega regime with the capacity to influence and pressure inside the regime, given its communication with officials adept to the dictatorship and their alliance with key countries in international politics such as the United States. If that were not enough, it could be said, that this sector was the most organized at the national level because of its level of institutionalization of its members.

Secondly, the student movement was a complex element to analyze if you take as a base the five student organizations that confronted the regime of Ortega and Murillo in the National Dialogue. It is valid to recapitulate, in honor of truth, that the insurrection, although it was initiated by university students, transcended the university overtones and became purely popular. The people overflowed shaping the April popular rebellion.

The slogan “They were students, not criminals,” although well-intentioned was displayed from a purely classist perspective – as if criminals could be riddle with bullets. This nullified any rights of the “shirtless” to demand a place in any decision-making spaces and interrelate the “taking the streets” with “hitting the table” in the dialogue.

Moreover, certain student organizations that held the right granted by the pulpit to speak on behalf of the people in general had no connection to student bases that were barricaded in universities such as UPOLI or UNAN-Managua, much less in the roadblocks. This prevented a relationship between the advanced party in the streets and the advanced party in the Dialogue. The internal struggles in the student movement that was being constituted as of April weakened its capacity for dual-track political advocacy.

Without delving into the other representatives of sectors that by themselves had no capacity to mobilize except for the organized peasant movement, two reflection could be made: 1) it is understandable why the organized private sector has positioned itself as a relevant actor in this alliance, its fundamental position in the management and decision-making lies in its organizational capacity, acting as a block in favor of its interests and direct capacity to influence the Ortega-Murillo regime. 2) The reason for the hope placed on the students organized in the Civic Alliance are clear, which was once too large, and why it has been dissolving given the inability to direct the resistance and truly cause a strong enough uprising to bring down the existing political regime.

In these days, the Civic Alliance has announced that it will have meetings with certain key actors to exchange ideas on the formation of an opposition coalition, while the “Ciudadanos por la Libertad” (Citizens for Freedom) Party has presented a group of advisors in pursuit of becoming the electoral ticket in future national elections.

If perhaps the hope continues in relevant figures of the April insurrection, it would be necessary to look the other way and build or renew the political subject that disrupted the bases of the Ortega-Murillo regime. After all, as the political scientist Chantall Mouffe states, there are no political subjects that fight, politics itself is the struggle to constitute that political subject. We have to invent and reinvent.