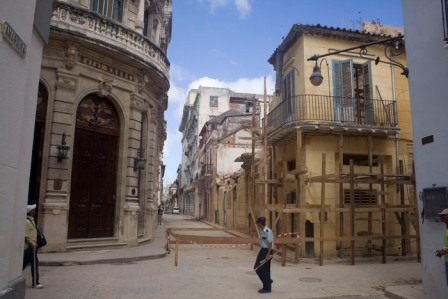 HAVANA TIMES, April 2 – Those who revised Marxism, transforming it into dogma and using it to eternalize themselves in power, are remembered only to keep in mind what never should have been.

One of the serious consequences of the paranoia of the Stalinist systems — which imposed themselves on behalf of “Leninism” and the “working class,” and sought to eternalize bureaucratized power — was the constant production of political “enemies.”

Those “socialists” (who never were) saw enemies everywhere due to their thirst for power, their permanent fear of losing it, intolerance and sectarianism. When they didn’t find those enemies, they manufactured an opposition because they needed them to justify their repressive and totalitarian policies. This also served to sustain a bureaucracy specialized in matters of security, which guaranteed the survival of a few leaders, who believed they were the revolution itself.

All that someone had to do — no matter how high their rank or whether they were a simple citizen — was to express some opinion that didn’t agree with the positions of the Great Leader or the political leadership for a file to be automatically opened on them as a “potential enemy.” According to the “seriousness of the case,” a swarm of agents and all kinds of technical resources would be directed against the poor soul to confirm that they did indeed work for the enemy and to reveal their plans.

Since the enemy and their plans appeared in concrete form only on rare occasions, it was automatically concluded that any action “coincided” with those of the enemy. Therefore, it was necessary to deal with them accordingly as enemy pawns.

An individual’s actions could coincide with those of the enemy for a countless number of reasons: from rightly or wrongly criticizing official policies, to accidentally getting too close to a family member of someone in high leadership and therefore endangering their “personal security,” to thinking about leaving the country, to making “jokes in poor taste” or anything else that could affect “government security.”

Anything was suspect that could be considered a threat to “state security,” which for the ruling leadership was their personal security since they were the state; they had been ensconced indefinitely in power given the absence of democratic processes and their Blanquist* methods of bringing about revolution.

When there didn’t appear concrete evidence that permitted the prosecution of “dangerous opponents” in accordance with the manipulated laws, it was necessary to “create an incident” or to incite a “political crime”; therefore they recruited agents who would get closer to those “objectives” to involve them in plans, contacts and often vague actions or ones created by themselves – though “unquestionably tied to the enemy’s activity.”

When the individuals became “operational” — often because the instigators themselves persuaded them to become involved with the “enemy” — the agents would act as witnesses or continue the “game” in prison along with that individual in order to “follow the case.” In the end, the person was accused and sentenced for enemy activity, and the “workers-peasant state” emerged victorious in yet another battle against the “enemies of the people.”

Many enemies (and heroes) were manufactured this way – with any “potential adversary” receiving the clear warning that no truce would be struck with them. They would have to either “get back on track” or they too would find themselves going down that same road. It was a cheap formula for engendering self-censorship and limiting the “opposition” through a certain message: “A state security agent can be anywhere.”

The production of enemies therefore multiplied because many of those who began to take note of this methodic artificial production of opponents showed themselves in disagreement. If they did not identify themselves as open opponents of those methods, when their thoughts were “discovered” they were immediately added to the archives of potential enemies, meaning the state opened a “file” on them. Therefore the need arose to “create” apparatuses to control those involved in counter-intelligence.

Among other reasons, manufacturing enemies contributed immensely to Stalinist totalitarian regimes becoming more and more isolated from the people, from the workers and from their own revolutionaries, who were increasingly unhappy with repressive activities. “Potential enemies” were all those who dared to question the great leader, aspired to change the methods of repression and control, or suggested forms of democratic change.

Those repressive bodies — by no means socialist — were true factories that cranked out enemies.

No rule of law

The disasters in those societies, which initiated political processes toward socialism under the rod of Stalinism, were brought about by the absence of authentic and decisively popular participative democracy. Instead there were regulations and restrictions on the use of power; violations, in the name of “government security,” of all internationally recognized political and civil rights; the nonexistence of a true rule of law; the dependence of all powers on a sole absolute almighty center; the supreme ability to issue decree laws; the absence of a civil society able to subject power to constant scrutiny; and the absence of the rights of free speech and assembly.

Everything was set up to guarantee the victory and permanency of the “socialist revolution,” which the leaders identified with themselves and not with the process of the democratization and socialization of political, economic and social life.

When socialists appeared criticizing this and speaking even vaguely of democracy, power to the people and workers, freely associated labor and respect of all human rights, the Stalinists were frightened by this threat to their power. Instead of listening to those demands and addressing them, they tried to isolate those voices and then transform them into “enemy agents.”

Some ended up being arrested or prosecuted for any violation of the law or accused and even convicted of serving the enemy, of being “traitors.” They were left rotting in jails without anyone’s defense. Other figures like Trotsky and Bukharin were simply murdered. Different ones opted to leave the country or were forced to do so, and the lesser ones did in fact wind up siding with the true enemies of socialism.

There were also those who concluded their days in psychiatric hospitals, with or without mental problems, while some persisted in their struggles inside and outside the party, with many difficulties but perpetually on the razor’s edge and with a guillotine close by.

Such methods, which were used against the right just as much as the left under those regimes, have no place in a participative and democratic socialism.

Still, this account would be incomplete if it didn’t include the role played in these activities by the intelligence services of imperialism. Interested in destroying all vestiges of socialism, be it in a direct or indirect form, they act to penetrate or recruit agents from those same political and security operations that foster those atrocities. Alternately, their aggressive plans foment a siege mentality that suits the hegemonic interests, whether self-created or stimulated from the outside with every destructive intention.

That’s why Lenin was correct when he pointed out that under the skin of an extremist hides an opportunist.

These are lessons that must not and cannot be forgotten.

When the experiences of “real socialism” ended in debacle, this vindicated the silenced socialists and communists, those who had been decimated by then, beaten down by such difficult struggles. They found themselves without the accumulated forces to fight for ideals that had been perverted by the self-described communist and therefore confused by the majority of people, who no longer trusted the word “socialism” – the once magical dust that had moved the multitudes.

The rescue of socialism seemed all but impossible.

Not even a fourth of this 21st century has lapsed since that disaster, and the international capitalist crisis has erased the few gains that remained from the labor movement of the 19th and 20th centuries. However a new class of freely associated laborers has been gradually breaking the wage-labor bonds that tied them to capital as they become independent self-employed workers and members of cooperatives who work under principles of self-management.

They have begun forming armies of millions of free workers around the world who in this manner are adopting new ways of life as well as environmentalist, democratic and rational principles of production. They are developing new forms of civic participation that borrow from the best traditions of all the revolutionary processes from all epochs and they are integrating these with cutting edge computer and communications technologies.

The socialist principles and ideas of the founders continue to live and gain momentum in the great social movements against capitalism. In a diversity of ways these include the critiques and mobilizations via the Internet and other new networks of communication. This is taking place everywhere in the world as those old vices of manufacturing enemies as well as their associates are running out of space in the face of modernized democratic, socialized, tolerant and pluralistic concepts of the new socialist society. This is the concept of “with all and for the well-being of all,” as was once dreamed and bequeathed to us by the most illustrious of all Cubans, our national hero Jose Marti.

Those who revised Marxism, transforming it into dogma and using it eternalize themselves in power, are being buried in history. Now almost no one remembers them except to keep in mind what never should have been.

* Louis Auguste Blanqui. A French revolutionary who believed that the socialist revolution would triumph if it was directed by a professional vanguard that adopted dictatorial methods to consolidate itself in power.

One thought on “The Obsolete Fabrication of “Enemies””