I attended the opening invited by curator Mercedes Aguirre Sotolongo, who is also connected to Francisco Rivero by a friendship of more than thirty years.

I cannot comment on this exhibition as would an art critic or an expert in painting – I am neither. Yet I had barely entered the hall on the second floor, when what immediately caught my attention was a painting located at the end of the room on the wall facing me.  I was drawn to it for its color and the delight it instantly evoked in me.

Despite this, I decided to be disciplined and to proceed in the order suggested by the curator. I viewed the paintings in succession starting from there.

If the first painting caught my eye for its profusion of color, I was now surprised by the variety of Francisco Rivero’s techniques and mediums: collage, tempera on Bristol board and oils on that same medium. There were also included several collages with acrylic on cardboard panels (a material that is used here in Cuba to temporarily cover a hole in a door or a window of one’s house).

In some way these works made me think of a quest for one’s African roots, an emigrant’s homesickness, the sadness of distance and the search for one’s self; this was perhaps owing to the somber tones or the use of black as the sole color in some cases.  What comes to mind is one phrase that was given as the title of one of his paintings: “Some are leaves, others are branches, but me, me, me, me… I am the root.”

Finally I came to the painting that had grabbed my attention at the start, and then the surprise came: it wasn’t an oil painting. Something I could note in Francisco Rivero’s pieces was that in no case did he use oil as a medium. In this instance nor was there Bristol board, but a combination of fragments of sewn fabrics. This painting was titled “Un día sin nubes” (A Cloudless Day),” something that to us islanders is typical. Nevertheless, this title suggested to me that a day like this in France can be something special and perhaps much hoped for.

The use of fabrics was repeated in the three remaining paintings that form Francisco Rivero’s display. If I had to describe him based only on his work, I would say he possesses a restless mind and a need to constantly explore and experience. 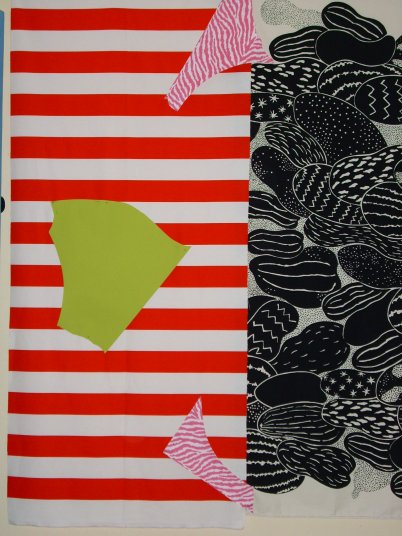 I also had the opportunity to speak with him; he talked about his interest in fabric as an element of daily life that has dressing us as its primary function. It didn’t surprise me to find out later that this man who had studied painting at the San Alejandro Academy in Havana between 1972 and 1976, had also graduated from the Superior Institute of Design in 1984.

In the work “La gran felicidad toma su espacio” (Great happiness takes its space), the role of wall covering adds itself to the combination of fabrics. This was the same in “Llega en el silencio elocuente de un sueño” (Arriving in the eloquent silence of a dream), in which the silhouette of a Caribbean or African woman emerges, from the combination.  In the painting “En la fría colina una canción” (A song in the cold hill), the colors blue, red and white are combined – colors that are coincidently those of both the French and Cuban flags.

Or perhaps not coincidently; it was the French Revolution —with its ideals of “liberty, equality and fraternity”— that was the inspiration of almost all revolutionary uprisings in the 19th century. The reality of these ideals in contemporary France is a constant concern, which was reflected in my various conversations with Francisco Rivero.

I’ve been re-discovering this exhibition through several visits, each revealing new detail in themself and when speaking with the creator.  Within this exhibit, consisting mostly of paintings, there is included a small installation made of cardboard. (Here in Cuba these are used as containers in stores, and we often see them thrown away outside of warehouses and in garbage containers.) 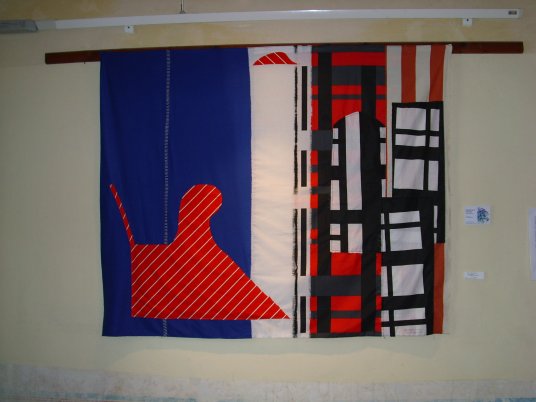 I must admit that it didn’t get my attention until the third visit, basically because of its title: “Vision.” The artist told me that it involves the covering that protects the fiber optic telephone lines that were installed in his home in France.  The man who did the work asked Francisco if he himself could get rid of the covering, because apparently the worker didn’t have time. So Francisco agreed.

But then he saw the potential of the material to become a work of art in its natural state, without being altered with paint.  That was the vision he had when contemplating the covering and trying to fashion forms with it.  This is where the title came from for the work now being exhibited at the Victor Hugo Center.

In this exhibition are included one watercolor and three small-format oil on canvas paintings, untitled, by painter Lorenzo Padilla. This artist obtained a scholarship from the Prado Museum at the beginning of the 1960s and since the end of that decade has lived in France. Francisco describes him as a person of great sensitivity and high principles. 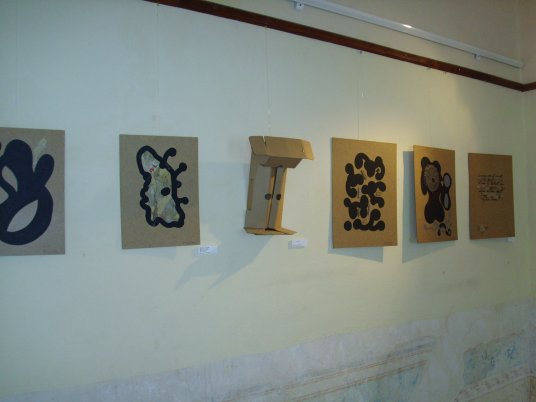 Lorenzo has donated works of art to the city of Matanzas and also to a collection of African art that is exhibited at the Matanzas Museum of African Art. For this reason, he was granted the Distinction for National Culture in 2006.

The site selected for this exhibition was not random.  As mentioned, it is the Victor Hugo Cultural Center, located on calle O’Reilly in Old Havana.  Though the celebrated French writer never visited here, the center was inaugurated on April 16, 2005 to pay homage to him for his solidarity with the Cuban people in the struggle for independence from 19th century Spanish colonialism.  It is also said that Hugo maintained correspondence with our “apostle,” Jose Marti.

From this center, French culture is spread in the community and language classes are given, as well as conferences and movie screenings. The exhibition “Cimarrones en Montmartre” will remain open here until February 15.