Bags, bracelets, keychains and earrings are some of the products they’ve learned to make while in prison and which they now sell at fairs.

HAVANA TIMES – As far back as she can remember, Ana Cecilia Hooker has handcrafted and sold jewelry and house decorations. “I would use every material I came across if I thought I could make something out of it. It was always a pastime for me,” she said. However, this university professor never thought this might become her only means of financial support.

Ana Cecilia was kidnapped and held by Daniel Ortega’s regime for several months. Following her release from jail, she began to meet with other released political prisoners to find a new form of livelihood. And thus was born the idea of holding “blue and white” craft fairs to sell products that they themselves make: bracelets, necklaces, shirts, cups, earrings, bags, decorations, etc.

“While in jail, we realized that the public wanted our creations, primarily bracelets, as a form of protest. That’s what gave us the idea to hold these craft fairs, which also serve as a means of public expression,” she explained.

The craft fairs are “basically an economic tool we employ to deal with unemployment and the lack of opportunities available to us,” she added.

They learned in jail

Hooker says she perfected her previous jewelry-making skills while under illegal arrest in “El Chipote”; illegal because following the night of her arrest on November 19, 2018, after participating in a street demonstration in Somoto, her case was never brought to trial.

“I went out to protest, to ask for a Christmas without political prisoners, and they ended up making me a prisoner, during Christmas, New Years, and up to June,” she said with irony. “My kidnapping was illegal, so much so that they hid me when the representatives of the European Union arrived (at the jail); and they always told me that I would be released soon,” she explained.

Now, with help from other released prisoners, she has learned how to make bracelets from macramé and plastic threads. But she’s also experimenting with crafts made from “cold porcelain” clay.

Prior to being kidnapped, many of us already had certain abilities. We’re all helping one another and we’re learning how to make new products. We’re also collaborating amongst ourselves to learn how to market them,” said Hooker.

Sales are a success

They held their first fair outside of the Metropolitan Cathedral in Managua on June 26th, offering handicrafts with themes reflecting the social rebellion. On that occasion, six of the more than twenty former political prisoners who are members of this initiative participated.

At the second fair, held last Sunday in Masaya, the number of participants rose to fourteen. “Both fairs have been successful – many people come to buy from us,” explained Yolanda Moraga, another one of the prisoners released by the Ortega regime.

In spite of the nearby state of siege perpetrated by police on the streets of Masaya, they sold their “blue and white” products in the atrium of San Miguel church. Blue and white are the colors of the Nicaraguan flag and symbols of the protest. 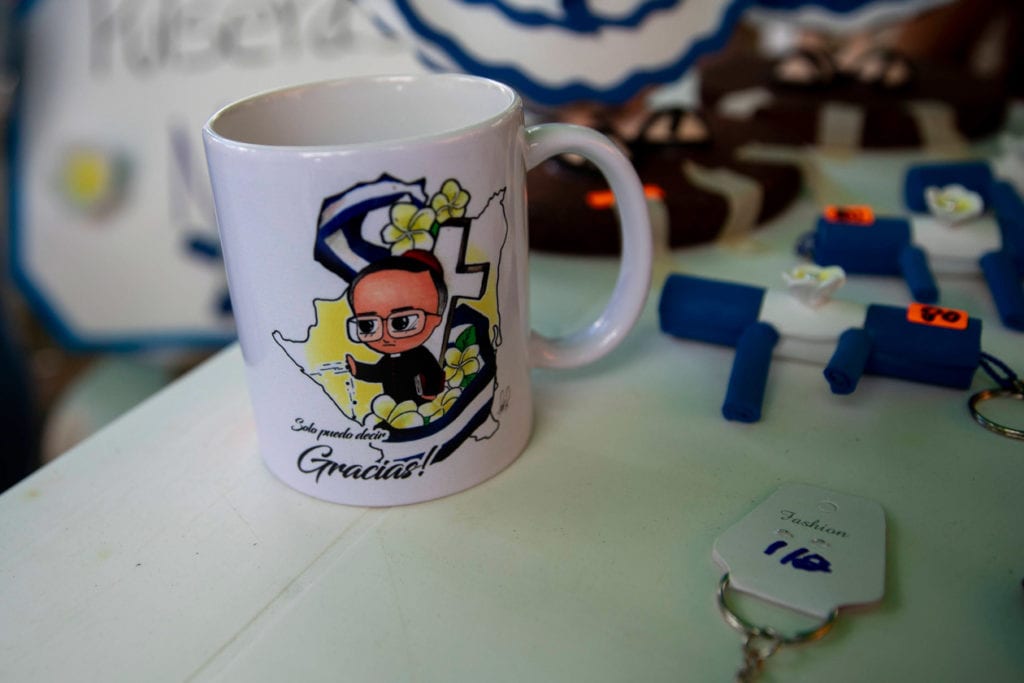 Bracelets of woven threads or other materials were among the most prominent products being sold at the fair. “It’s the product that almost all of us who were jailed learned to make,” explained Moraga. In a few days she learned how to do something she had never done before in her life.

However, other products being offered at the fair included key chains in the shape of mini pipe-launchers, similar to those used by some demonstrators to launch homemade explosives at the attacking Ortega dictatorship forces; as well as plants decorated in blue and white, shirts with images referencing the protests and dolls made out of Foamy in the form of Alvaro Conrado, the adolescent murdered by police while he handed out water in an April 20th demonstration last year.

A Means of Support

These released political prisoners plan to continue holding fairs in various cities throughout Nicaragua. “We’re moving ahead little by little. It requires some investment to travel to certain areas and we have to think about security issues; but we’re already being invited to many cities,” explained Edwin Juárez.

We, the political prisoners, are holding this fair in order to help us survive. The dictatorship criminalized our struggle; and because our records are now “stained”, we can’t find work. People are afraid to hire us because of a fear of reprisals at the hands of the regime,” he added.

This 25-year-old was among the first prisoners to learn how to make the bracelets. “We began to sell bracelets from prison, and today we continue selling them because it’s our only means of income,” he said.

*Vandal is one of the many pejoratives used by Rosario Murillo to describe those who oppose the government.