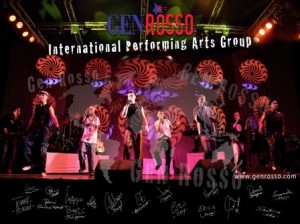 Gen Rosso was founded in Florence, Italy in 1966, out of an idea of Chiara Lubich (UNESCO Prize for Peace Education) who gave a guitar and a red drum set to a group of young people to communicate through music, messages of peace and universal fraternity.

During 40 years of performances, Gen Rosso has carried out 150 tours, 1,500 concerts and has presented in over three dozen countries, a list that will soon include Cuba.

Examples of its multicultural spirit are that songs in 24 languages are included on its’ 50 albums; and the fact that it’s current makeup includes 18 artists from 10 countries: Brazil, Congo, Kenya, Tanzania, Argentina, Spain, Italy, Switzerland, Philippines and Poland.

The group belongs to the Young People for a Better World Association, an organization present in over 180 countries that works “to contribute to the building of a more united, peaceful world, without barriers of race or nationalisms.”

For their performance in Cuba the group has chosen the two-act musical titled: Streetlight, a work they premiered in 2000, and which had much success in the United States and Italy.

Streetlight is based on the history of two close friends, Charles and Jordan, who live in a poor Chicago neighborhood called The Hole. The clash between local gangs and the death of the Jordan’s girlfriend, will take Charles to choose a path of non-violence, a decision that transforms his life for ever.

In Streetlight the group blends different genres of music from diverse latitudes and involves musicians, singers and dancers.