HAVANA TIMES – After heated controversy and sorting out internal differences, Cuban women won important social and political battles in the first four decades of the 20th century, which are depicted in the documentary “En busca de un espacio”, by filmmaker Marilyn Solaya.

“The movie tries to repay a historic debt,” highlight the civic role these women played and their contribution to the building of this nation, “aspects that have been completely silenced,” Solaya told IPS Cuba’s editorial team when talking about the documentary that made its debut at Havana’s Chaplin theater, on June 26th.

“En busca…”  was conceived as part of a larger project, the feature movie Todas, which will be a film about different women.

Marilyn Solaya has been writing the screenplay for some years now, recreating breakthrough moments in the lives of Cuban feminists and suffragettes such as Maria Collado, Pilar Morlon de Menendez, Maria Luisa Dolz and Damasa Jova, whose stories link with a fictional character called Ana, who is played by Andrea Doimeadios.

Acclaimed actresses Isabel Santos and Amada Morado also appear in the movie, as well as in the documentary.

The law to manage her property by herself (1917), divorce (1918), overturning the law that stipulated adultery was a crime (1930) and the right to vote (1934), are some of the milestones that the documentary deals with.

Meanwhile, the filmmaker explained that the content of her work is based on the book “En busca de un espacio, Historia de mujeres en Cuba” (Social Sciences, 2003), written by Julio Cesar Gonzalez Pages, who was the documentary’s consultant and narrator.

“The luxury of having a historian friend means that you can get in touch with events and figure that people don’t normally talk about or whose lives we only know a little bit about,” the filmmaker said.

She also said that “this happens with the documentary’s leading women,” who aren’t known today, in spite of the monumental contributions they made to us obtaining the countless rights we have today, “which they didn’t always live to see.”

Gonzalez Pages’ narration, the expert opinions, the archive material used and books and research studies that were consulted, have allowed Solaya to recreate the most important moments from that time, such as the National Congresses of Women in 1923, 1925 and 1939.

In order to take us on this historic tour and link the past with our present, the film features interviews with renowned Cuban researchers and intellectuals, such as Daysi Rubiera, Norma Vasallo, Gisela Arandia and Yamila Gonzalez.

According to Solaya, while this documentary “needs to get out on the commercial circuit, it is also a piece that is destined for places where women’s rights are debated. 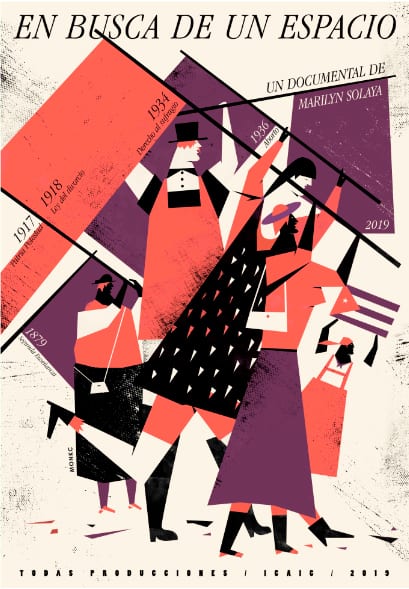 The filmmaker also emphasized that she had a unique team, where she formed a link between “technical staff from the world of film and people from the academic sector.”

Rafael Solis was the director of photography on the movie, Victor Gonzalez was behind the camera, Oscar Perez did the light design, Ricardo “Tato” Perez was the sound director, Rodrigo Garcia created the theme song, Osmani Olivare was in charge of the soundtrack, Kenia Velazquez edited the documentary and caricatures were done by Jorge Sanchez.

Members from the Iberoamerican and African Masculinities Network (RIAM), such as Yonnier Angulo, joined this group, as did Neida Penalver in production, Jesus Munoz as assistant director and media chief, and Younelsis Hernandez was responsible for wardrobe.

“History proves that when there were moments of union, they were able to achieve great feats,” Solaya said at a press conference held on Tuesday, at the Fresa y Chocolate Cultural and Film Center, in the Cuban capital.

According to historian and anthropologist Julio Cesar Gonzalez Pages, the documentary “is a tribute to great women who have been silenced by history, and a way to celebrate centenaries of dates that are overlooked, such as the founding of the Women’s Club in Cuba (1918) and the Divorce Law (1918).”

He believes “it’s a great tribute from Cuban culture today to these women who were the pioneers in many social developments that every woman enjoys today.”

The consultant for the award-winning movie Vestido de Novia (2014) as well, which was Marilyn Solaya’s debut as a filmmaker, also says that the documentary is very important “because the book was a more private piece of work, which mainly reaches academic circles, but film has the power of reaching more people.”

He also stated that the connection between the past and present has only been possible because Marilyn Solaya “is a convinced, committed and feminist filmmaker.”

Gonzalez Pages added that the documentary proposes a trip, through a camera lens, to places with great historic and heritage value, even today.

These include the former headquarters of the Women’s Club in Cuba (which is the office for the Centro Habana’s Cultural Board), the H. Upman tobacco factory, the Teatro Marti and Quinta de los Molinos.

Plus, he used the opportunity to once again thank Havana’s Alicia Alonso Grand Theater and the assembly hall at the Cuban Academy of Science for allowing them to shoot the main scenes of the two first editions of the National Congress of Women.

At the conference, famous actress Isabel Santos announced that what motivated her to take part in the documentary was the fact that “it recovers a part of our history which is left in the dark, and you have to seek out information and do a lot of research to play each character.”

2 thoughts on “New Documentary Revives the Legacy of Cuban Feminists”