He got his start in music singing songs in opposition to the Somoza dictatorship. Forty years later, he’s once again raising his voice against the authoritarian regime of Daniel Ortega. This is the story of one of the members of the music group “Pancasan”.

HAVANA TIMES – Francisco Cedeno became familiar with living in the underground long before his twentieth birthday. It was the seventies, and Nicaragua was in the throes of a popular insurrection. While living clandestinely, he composed the protest songs that became the hymns of that era.

Pancho, as he’s still known, was one of the members of the music group “Pancasan”, author of popular songs of the day such as “La Hora Cero” [Zero Hour], “Apuntes del Tio Sam” [Notes on Uncle Sam], and “Maria Rural”.  Forty years later, he’s gone back to writing and composing, in the face of the clamor of a new generation that seeks the end of another dictatorship.

“For the second time in my life, I’m writing songs against a dictatorship, and, yes, they’re songs of struggle,” he says.

More than a year ago, in the small music studio he built in his house, he composed and wrote the first melody that his heart dictated, after watching one of the marches. The march looked to him like a twilight pilgrimage, with young people raising up crosses and backpacks in honor of the students who were missing or killed.

“Today’s context finds me at the age of sixty, with a certain maturity, a clearer way of seeing things, more serene and less impulsive than when I was twenty. I don’t regret what I did before, and I’m not sorry today to express the things I have to say through a song,” he affirms.

The first times that Pancho Cedeno sang with “Pancasan” were in the halls and classrooms of the UNAN, the Nicaraguan National Autonomous University. It was there that everyone got together and took refuge in music, as the new generations do today. The music was their cry of struggle transformed into a song.

“We would rehearse at night in the classrooms, and we also did what at that time was known as “conspiracy work”. Some of the songs were composed among all of us, others were written by Salvador Baltodano, and some were mine. These songs that began with the activities of the student movement moved on to become popular in the neighborhoods, the outer departments, and in some of the semi-rural areas of the Pacific zone,” he recalls.

In those days, like today, singing songs in favor of the insurrection was nearly a crime. Those who dared to do it knew they’d have to be ready to hide from the National Guard. In the meetings – similar to the flash protests of today – they’d only get the chance to sing one or two songs.

“[At that time] you had to have strong legs, because the Guardia would chase you, and if they grabbed you, they’d kick you, they’d take you to jail, or you’d go missing. Before we went to the meetings, we’d plan where we were going to run to, sometimes there was a car that would be waiting for us two blocks away. We’d take an extra shirt with us, and we’d change into it while we were running. More than once, the Guardia discovered the spot where we’d stashed our guitars and took them away,” Cedeno recounts.

When the Revolution triumphed, Pancasan took a break, and the members dedicated their time to other things. Years later, during the eighties, other people joined the group and changed the musical sound that had characterized it. But their songs remained in the repertory of the protest music of those years. 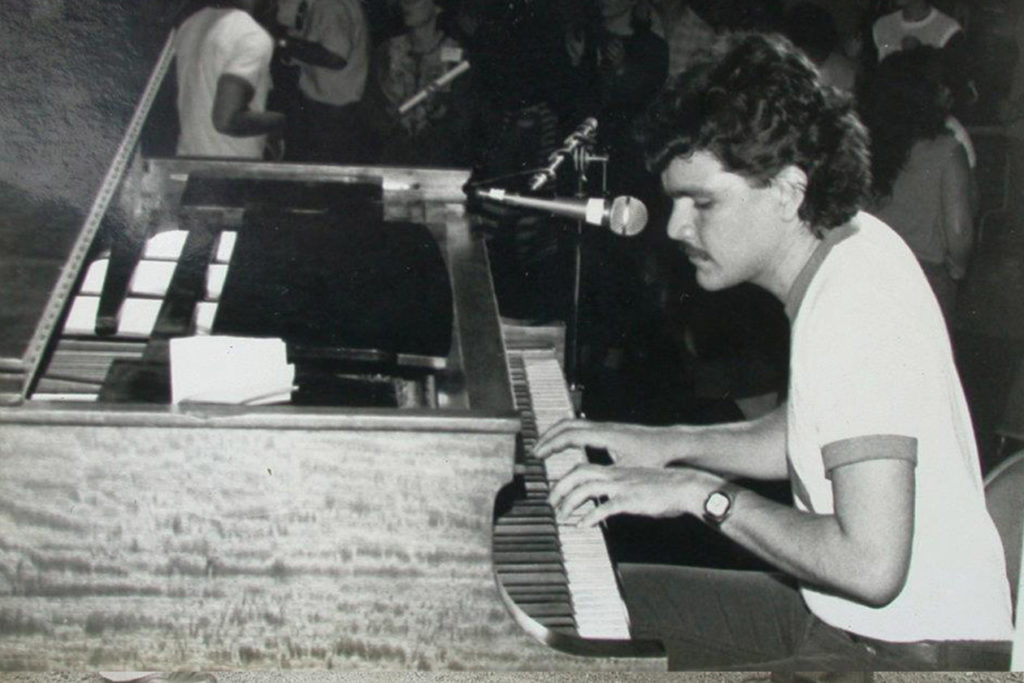 The blue and white raise their cry

The first song that Pancho Cedeno composed in this new political context is called “Atabal de la revoluta” [Drumbeat of the revolt]. It was written and recorded a few years before the April 2018 crisis arose, and it’s a combination of rap beats and verses that criticize the political class in Nicaragua. In his judgement, it’s the country’s political class that pushed the country to this point.

His second song, “In April”, arose during the months that the regime carried out their so-called “Operation Clean-up”. This song was recorded at a distance, thanks to technology, by the group of formerly young people who had made up “Pancasan”.

“I wanted to do it with the group, and we managed to put together the voices of all the original members of “Pancasan”, thanks to technology. This is a song dedicated to the fallen. Our music has always been dedicated to the fallen, because that’s how testimonial music is.  We never believed in the cult of personality. Speaking for the generation that began organizing in the seventies, we weren’t in the struggle for favors; we were there for a commitment, because we believed that as youth we had to get involved. Later, during the eighties, other things happened,” Cedeno explains.

The group’s repertory has been enhanced by a new version of “Song to a political prisoner”, a song that was written over forty years ago when the Somoza dictatorship was putting members of the opposition in jail.  Another song, “El Desaparecido” [“The person missing”], has recently been written for the dozens of Nicaraguans who have disappeared since April 2018.

“We were the generation that made the Revolution (…)  I imagined that maybe I’d manage to turn sixty in another type of country, a country with more opportunities, more development, more respect, very advanced in its way of looking at things,” Cedeno reflects regretfully.