Andy Rubal Bello’s creative versatility led the record label EGREM to produce the first album of this young pianist, singer, composer, producer and musical arranger, who is currently developing his musical career between Cuba and Canada. 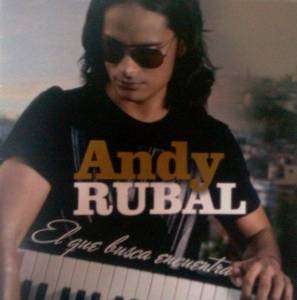 HAVANA TIMES — Born in Santiago de Cuba, young Andy Rubal Bello has had music running through his veins ever since he was a little boy. The most Caribbean city in Cuba has inevitably marked him with its history and traditions, where the voices of bohemian trovadores and great son singers mix into one melody.

“When I was a child, I experienced things that have helped me a lot. I have to thank Ruben Rodriguez Mulet for having created Los Baby Salsa and for taking me on and for the sensitivity he passed onto me by being accompanied by the Son 14” orchestra,” he confessed.

The result of a long experimentation process, the album El que busca encuentra was born, Andy Rubal’s first record production. EGREM record label took a chance on this album where Rubal moves from conga, pilon, eastern son, salsa, timba, French tumba and reggae with ease, without forgetting other rhythms such as balada and pop, all of them mastered with a praiseworthy performance of brass instruments and a very attractive rhythmic beat to get dancing to.

A graduate from the Esteban Salas Conservatory in Santiago de Cuba and then later the Music Department at Havana’s Arts University, he was named a “student par excellence” by Maria del Rosario Hernandez, the dean of this Department, in vain. Of course, he was also influenced by the great masters of composition Roberto Valera and Juan Pinera.

Loyal to the teachings he received at the Academy, the author of El que busca encuentra has worked with great musicians such as Waldo Mendoza and Raul Paz. Furthermore, he recently won a popular music composition award, the Ignacio Villa, which is given by the Saiz Brothers Association. Today, he also stands out for his work in production and musical arrangement.

On his first CD, – which is named after his first song which he wrote for himself spurred on by his mother Zenaida Bello- Rubal sings the songs he wrote where he sings about love, faith, his experiences, everyday Cuban life and tries to reflect his Santiaguero identity, which you can hear from beginning to end even though he now lives in the cold land of Canada.

The album takes a journey through the more transcendental experiences in his life. On that note, the song Enamorado en Montreal (track 2) is inspired by his wife the Canadian singer Marion Brunelle. Que hemos hecho? (track 7 on the CD) is also dedicated to her, when Marion was pregnant with their son Santiago.

On track 4, which is called Yo me casare, Andy Rubal and his Orchestra share the stage with Los Baby Salsa, his former playmates on his journey through the world of music. Toca pensando en mi (track 9) is directed at all those women who approach famous musicians out of interest and because of love. Meanwhile, La fiesta de Norma (track 6) is dedicated to Cuban women and especially to Norma, the Cuban Ambassador at the United Nations (UN).

On this album, Rubal acts as a director, musical producer, musical arranger, singer, pianist and keyboard player. It would seem that we’re dealing with a one-man show but he’s a complete musician, who has a strong formation in music, the result of the country’s Artistic Teaching System.

Accompanied by his orchestra, Andy Rubal, with his warm sound hopes to place his popular danceable music, which takes the romantic song as its focal point, into the young Cuban music scene.

One thought on “Synthesis and Identity in Cuban Music”