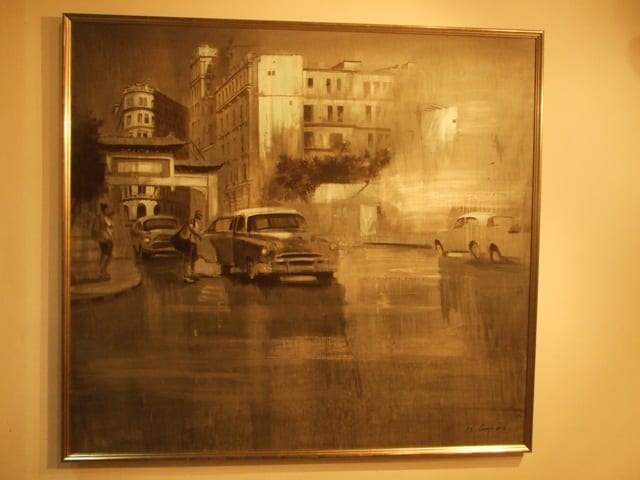 HAVANA TIMES – The “Three Trapped Tigers” exhibition by artists Douglas Perez, Luis Camejo and Kelvin Lopez will be on show at the Galeria Collage Habana on San Rafael Street in Central Havana, until the end of July.

Taking the title of Cabrera Infante’s book Tres Tigres Tristes, these three artists have come together to show us their own personal vision of Havana.

The writer delves into the life of Havana in the ‘50s in his novel, while Perez, Camejo and Lopez show us their visual depiction of a city in three different time periods.

Luis Camejo chooses to recreate today’s Havana, with its popular places and visible icons, the Malecon, old US cars that still circulate in this city that is surrounded by sea, bikes, streetlights and architectural or city images that form the backdrop to citizens’ lives, today.

Camejo takes advantage of large format pieces and a grayscale palette, whether that’s for his figures or the background to evoke the feeling of a city polluted by its inhabitants and this illusion of pollution allows the painter to give the viewer the feeling that what they are seeing is fading, as if the city and its surroundings were disappearing before our very eyes.

Kelvin Lopez is the opposite to Camejo in both a formal and conceptual sense.  Lopez’s work is presented in small format with a very defined color, black, which he uses to recreate the facades of Havana’s buildings across the city, in different architectural styles. A completely modern home that has resisted the passage of time and is still standing, and you can read the words “Patria o muerte” on each and every one of them, thereby certifying their existence.

If the above-mentioned artists are restrained with their color palettes, Douglas Perez is the exact opposite and has bright colors everywhere, contrasting sharply with tropical colors, which catch the viewer’s attention. He creates a futuristic, cosmopolitan image of Havana in this way, although he has had to borrow symbols from both the past and present to do this. Symbols from other parts of the world such as Old Europe, or the neighboring country to the north which shows the marks of other cultures in Havana’s everyday life.

Three cities in one, three ways of seeing Havana in the eyes of three trapped tigers who live there.