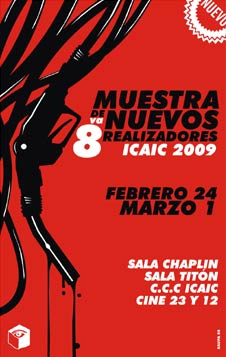 HAVANA TIMES, Feb 8. – The newest film festival in Cuba is an event that brings together the work of Cuban and foreign filmmakers who are under 35 years of age. The eighth edition of the New Filmmaker’s Showing takes place in Havana from February 24 to March 1.

The showing has a more flexible selection process than the two higher category festivals held each year, the Havana New Latin American Festival in December and the Low-budget Festival held in the eastern coastal town of Gibara, Holguin in April.

Despite the fact that the digital revolution has lowered the cost of making films and audiovisuals in general, the production cost of a short film or documentary is still very high for the living standard of a young Cuban filmmaker.

For that reason, although it is not official policy of the festival, the selection process is somewhat lenient. At past festivals the organizing committee has shown a willingness to overlook one or another error in photography, sound or any other technical aspect, which the young filmmaker will overcome with time.

This year there are 72 works participating in the main competition titled New Filmmakers: 35 documentaries, 22 fiction entries and 15 animated films. The festival also offers a space for foreign filmmakers, mainly film students. This edition 15 works from other countries were accepted in this section, including documentaries and fiction.

For the first time, a prize will be given this year for the best original score. Also for the first time, some aspiring filmmakers will have the opportunity to achieve financial backing: the screenplay projects elected as finalists in the Haciendo Cine category, will get the chance to show their work to eight institutions that can help them with full or partial financing for their projects.

Another attraction of the festival is that you can see a number of works in one sitting, since many are short, averaging 15 minutes. This year the longest film in competition is Fuera de liga (70 minutes), a documentary about the two main rival teams in Cuban baseball, Santiago de Cuba and Industriales. The shortest entry in the competition is Pasarela (1 min.), a fiction short about a boy waiting for his father to fall asleep so he can experiment with new ways of playing with his toy soldiers.

One attribute of the festival is the fresh ideas the young filmmakers bring to the screen. While many are influenced by the old styles, others tend to be very revolutionary. Many of the films offer a window onto the perceptions and concerns of young people in Cuba.

Among the materials of social content this year are: Reflexion (Fic. 8 min), a reflection about the situation of a recently graduated art teacher; Ciudad del futuro (Doc. 20 min), which narrates the founding of Alamar, a  large suburb in East Havana; Conversations (Doc. 30 min.),  about the EMO movement in Cuba; Esperando entodavia (Doc. 15 min.) tracing 50 years of  revolution in the life of a man who lives in the mountains; Malos en una ciudad mala (Doc. 31 min.) which contemplates the definition of “evil” in the most violent city of Cuba: Santiago de Cuba.