HAVANA TIMES – This is the question I can’t stop asking myself, at least for two years now, after I lost both my sister and my mother in just four months of each other. If that wasn’t enough, it’s also been more than three years since I’ve found something that resembles a decent job.

It just so happens that in the face of the inevitable distress that consumes me, many friends and acquaintances -with the best of intentions at heart-, have suggested and almost demanded that: “I have to be OK in spite of everything, as I run the risk of attracting further discord to my elusive luck.”

This repetitive quasi-mass appeal that I have to think positive, in spite of everything, has made me think about recent times and about how modern society got mixed up (God knows why) in the trivial world of self-help, where everything that happens to you normally boils down to one person’s fault – yourself, without taking into account external factors. Completely voiding Spanish philosopher Ortega y Gasset’s core idea that “I am myself and my circumstance; and if I do not rescue my circumstance, I do not rescue myself.”

No, it doesn’t matter, the world of self-help tries to convince you (and is successful in many cases) of convincing you that you are the one to hold accountable, because of a whole range of reasons, the main ones being: your mindset is bad, so, you don’t deserve the success you long for; and success being a slippery thing, has ended up in more generous hands, hands that are less negative than your own. 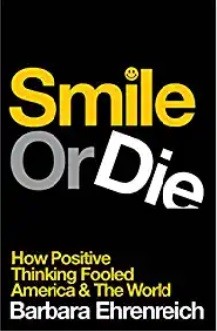 Barbara Ehrenreich is the author of the book “Smile or die: How Positive Thinking Fooled America and the World.” Barbara tells us that she began writing this book in 2004, after Rhonda Byrne, author of the best-seller and then documentary “The Secret”, stated that the Tsunami in Indonesia happened because “people living in this region had sent tsunami-inducing thought vibrations.” That was overstepping the line for Barbara Ehrenreich, self-blame had reached an extreme that she could no longer stand for.

In the nearly 300 pages of her book, “Smile or die”, Barbara explains the difference between optimism and hope “(…) things are pretty good right now (…), and things are going to get a whole lot better. This is optimism, and it is not the same as hope. Hope is an emotion, a yearning, the experience of which is not entirely within our control. Optimism is a cognitive stance, a conscious expectation, which presumably anyone can develop through practice.”

Barbara also recalls how an avalanche of friends and acquaintances jumped on top of her after she got breast cancer and demanded “Think Positive”, and “always smile”, because according to them, this was where the success of her recovery lied, more than in her chemotherapy sessions.

The reality is that modern society, as an institution, has somehow managed to pass on its incompetence and inability to give us a comprehensive life plan, to the individual itself. If your business or career fail, you are the only one to blame, there is no other reason. You didn’t push yourself hard enough, you didn’t work hard enough, and you definitely didn’t demand enough of yourself as you should have. You shouldn’t look for answers anywhere else.

A couple of years later, a friend kindly invited me to an experiential workship, over an entire weekend: Friday, Saturday and Sunday. There was a group of 50-something people doing exercises to build our self-esteem, which I remember included exercises for us to ask for help when we need it, as well as to heal memories of past, to make peace with out past, they told us, so we can gain a new lease on life.

I don’t think any of this is bad, but two years after taking part in this workshop, my life hasn’t really changed a great deal. That dream job never came along, business ventures never took off the ground and love still hasn’t made an appearance in my life.

Judging by Rhonda Byrne’s words, I continue to transmit negative vibrations and this is why I’m not attracting the things I want. Ha ha ha ha ha ha. Positive-thinking gurus try their best, with good intentions, but they don’t have the answer to a phenomenon as complex as Life.

Maybe it’s worth quoting the great Tolstoy when he said something that was so far-removed from positive thinking, but so close to real life: “The only absolute knowledge attainable by man is that life is meaningless. We give our life meaning.”

7 thoughts on “Are Self-Help Books Worth Reading?”