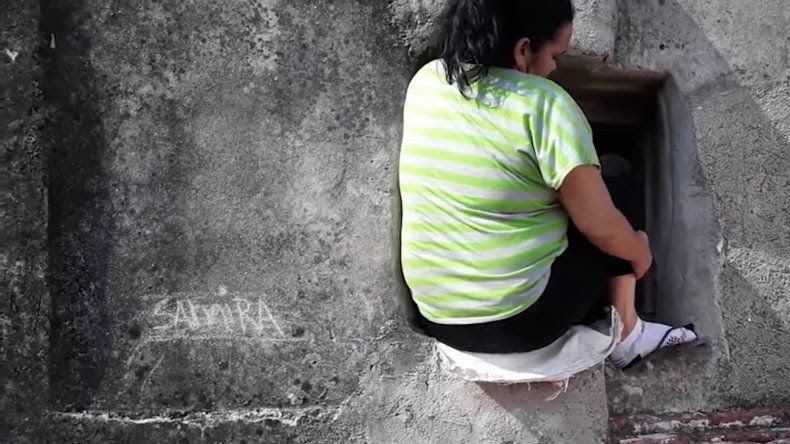 HAVANA TIMES – I have asked many people about their experiences of having their homes collapse.

Many haven’t been able to put their feelings into words or explain the fear they live with after something like this happens.

Elizabeth has survived three partial collapses of her home. What goes through her mind?

“I am always afraid, overwhelmed with fear,” she says, her eyes wide.

“You no longer welcome rain as a blessing, but as a potential enemy.”

Elizabeth looks at the wooden staircase as she speaks. The staircase was a temporary fix, but it has been there for over two years. It’s a weak structure, trying to connect the apartment with the street.

She tells me about the psychological damage that marks a before and after.

“You have these images in your subconscious that you want to delete, but you can’t. All you can hear are the terrified cries of two scared girls, a crashing noise that brings everything down in front of you.”

Elizabeth relives the moment: “Up until now, the thing that upsets me the most is the silence around this case that shook Havana, while, at the same time, one of the most luxurious hotels in Havana was opening.”

“Nobody talks anymore about that couple with the two little girls who had to get into and out of their house through the small bathroom window, which was the only way for two months.”

According to Elizabeth, the directors of the offices that should be resolving this sensitive issue of housing, have closed the case.

In times of COVID-19, what will these people be able to do if they suffer another collapse?

Where will they be able to take shelter after social distancing has been declared worldwide and everybody has closed their doors?

What will this family do this year, with the imminent threat and forecasts of heavy rain and intense hurricanes?

I look at the staircase, which is visibly damaged, and I wonder whether it really could become a death trap, a silent enemy that creaks and threatens your life every step you take. Waiting for the right moment to unleash chaos and death, throwing a mountain of rubble, human flesh, blood and bones into the abyss.

One thought on “The Next-to-Last Step ”