HAVANA TIMES — The camera moves from the 50-year-old man’s face with the backpack and cap to faces of those who are also waiting with us for seats to empty in Coppelia’s covered area.

Then, there is a long take of the area where you can see customers’ backs along the bar, employee faces behind the bar and the empty space left by some seats that are missing.

When the employee finishes making his signals, I approach him. The camera follows me.

“What flavors do you have?” I ask him.

Without looking at me, he points to the board.

“I know what the board says. But the board over there says the same thing and they only had banana ice cream,” I said.

“Whatever is written on there is what there is,” he answers again without looking at me and he disappears. Literally, he vanishes. The camera tries to follow him but there are a series of cuts that end on the face of the 50-year-old man and myself standing next to him.

In the line to sit in the covered part of Coppelia, eyes are anxiously looking for empty seats. An employee orders the first few in the line to go in, the 50-year-old man and myself included. The camera follows the group. Then it starts shooting from inside the bar.

The 50-year-old man sits on the seat to my left. The waitress begins to take note of people’s orders in a small notebook with a blunt pencil from people sitting on the side of the bar furthest away from us.  The camera follows her.  On my left, the 50-year-old man rests his backpack on his lap.

“You can’t go out without everything being a bother,” he tells me. That’s why I don’t go out anymore. I prefer to be stuck at home with my soap operas and horror films.” As he says this, he joins his fingertips on both hands and draws a square in the air with them.  Today, I left because I had to go looking for some medicines for my old lady and I thought about buying her some ice cream in passing. But, if I get her banana ice cream she’ll die on me.” 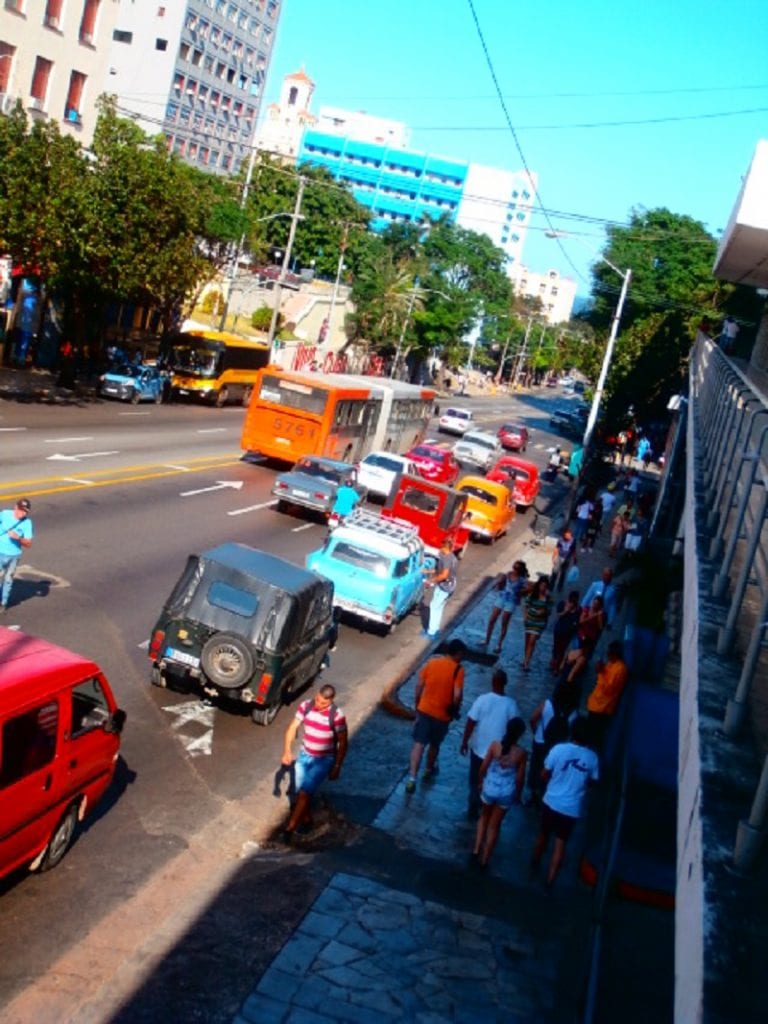 The employee gets to us, “I have vanilla and guava.” She tells us. From behind her, in a close-up shot, the camera focusses on the expression on my face while I listen to her. The 50-year-old man scratches his head on top of his cap.

“Give me three guava sundaes and a guava and vanilla one,” he orders.

I ask for two mixed sundaes. The employee jots down the order and moves away. The camera stays in front of me and my neighbor on the left for a few seconds. “At least with the guava my old lady won’t have to go the bathroom at night,” he explains to me.

The camera returns to the other side of the bar, where everyone has begun to eat their ice cream. The customers’ faces appear on the screen one by one. Every one of them suggests a similar mood. The neighbor on my right, a young 20-something-if-that year old, who I hadn’t taken notice of before, says that the ice cream is really good and tells us that ice cream is like science fiction in his hometown. While listening to him, I grind on the fourteenth piece of pure ice that I’ve put in my mouth.

The camera waits for me at the Coppelia exit on 23rd avenue. Before I get there, it takes a long shot that begins at the crossroads of L and 23 streets sloping towards the sea, Havana’s famous Rampa with its busy pavements, foliage, cars driving up and down the avenue in both directions, cars arriving and leaving the Havana libre hotel’s entrance, almost transparent as the clear sky of that recent cool November afternoon is reflected in its entire height.

While I approach the camera, it begins to slowly zoom in on my face that begins to lose focus until it breaks into hundreds, thousands of spread out boxes of color. It’s 4: 20 PM.