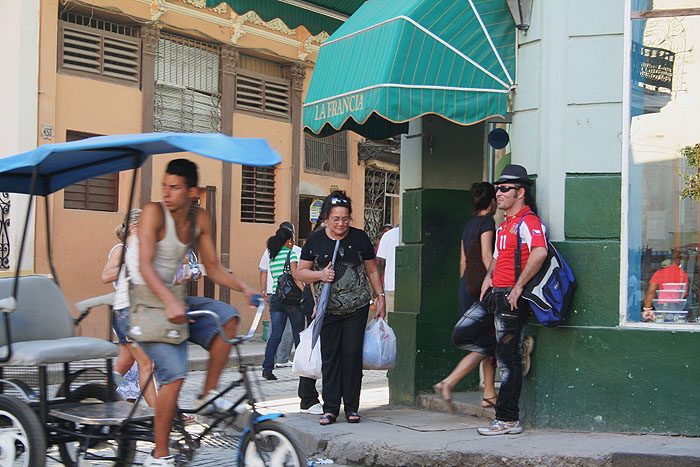 I just finished reading El socialismo está en la gente (Socialism is in the people), by Dilbert Reyes, published in Cuba’s Granma newspaper.  I agree with the journalist that “daily life gives us the best versions of how, half a century later, people continue building their island and their own form of socialism.”

However I don’t know if the testimonies that he provides in his chronicle are the most representative of my fellow citizens today when they speak openly about the society in which they live.

I found that using the voices of ordinary people was a good attempt at refuting the campaigns that present Cuba as the “kingdom of darkness,” sad, oppressive and a failure; nevertheless, pro-Cuba apologists commit the same sin: over-simplified one-sidedness.

In his article, self-sacrificing workers recall the social benefits, the stable employment, and the practices of solidarity that have characterized Cuban socialism over the last several decades.  The concrete examples given could have come from a newspaper report… but from 1981, 1982 or 1983.

What didn’t appear was the widely known dissatisfaction with deteriorating education and health services, the inadequacy of government wages or the emergence of crass selfishness (fortunately not yet triumphant) that have resulted from the economic and moral crisis of the last several years.

I don’t question the authenticity of the interviewees or their testimonies, but what did indeed catch my attention was the interviewer’s seemingly negligible interest in presenting the more complex picture of our situation.

It brought back memories

While I was reading the article, I remembered when a group of friends and I used to meet every Thursday for warm beer at a Havana bar, El Carmelo, to discuss self-management and socialism.  We called ourselves the “Proposal Network” and we succeeded in making several presentations on those issues in academic settings precisely at a time when the notion of non-state activity had been made something virtually satanic (around 2004) and with the government’s “Battle of Ideas” campaign in full swing.

One afternoon a guy who would see us there in the bar every week, came up to us and said in his lucid (and ludic) inebriation: “Damn.  With all due respect, I listen to all that hogwash you folks say about socialism and stuff… science; you guys are way out there.  What’s more, I think all of you are right; I want socialism too, because it’s good… the bad thing is that it’s too continuous.”

We might have been able to laugh and trivialize the matter, or to arrogantly say that his was “a marginal reading of reality.”   However I think this would be another misconstruction, one that’s also very popular and common that identifies “socialism” with the functions of state socialism as it has prevailed for a half century here on the island.

Responding to the apologists and those who tried to ridicule the forward drunk, I think that in any event we cannot blame the “common people” for that “error” of criticizing “socialism” because their experience in daily life as well as the official party line “reminds” them daily “what socialism is possible”….  While anything and everything else (including cooperatives, self-management and non-regimented solidarity) is “capitalism.”

The problem with this I experienced firsthand in my neighborhood of Alamar.  I was arguing with my local representative of “Poder Popular” (city council) about the mindless elimination of self-employed food vendors one summer in that coastal area given the nonexistence of those same government services.  It wasn’t by chance that a neighbor of mine, when seeing the squabble, commented to me saying: “Come on Chagua.  What you’re saying about setting up cooperatives won’t work.  When everything is private the problem will be solved.”

I’m bringing up these vignettes for a fundamental reason: our people are one in their living contradictoriness.  It’s not honest to assume them to be the ever heroic and luminous masses, just as neither are they all a band of loafers and good-for-nothings.  They usually don’t believe the state but they demand that it fulfills its promises.  They might guard childish illusions about markets, but they dodge its powerful blows and forcefully struggle against it.

They know and suffer from the conversion of solidarity into “internationalism” (a government policy that, without public, input siphons off limited resources) but they don’t abandon the networks of reciprocity between neighbors, relatives and friends, and nor do they stop giving their blood to the victims of earthquakes thousands of miles away.

Their actions might be slight but they are at the same time persistent, disinterested and loyal, irreverent and sensitive.  They have done what they could and what they have been allowed to do over these difficult years, joining the first volunteer missions to serve any humanitarian cause to guarantee the survival of those people and the values that shape them.

Cubans happiness, their dignity, their ingeniousness and inventiveness are directly proportional to the challenges they have faced (a formidable combination of imperialistic hostility and bureaucratic mismanagement) and inversely proportional to the lack of imagination of those who — from whatever ideological or professional position — try to caricature or judge their motives and actions.

For those who think, with the magnanimity of the enlightened, that they can categorize or judge “popular virtue” from pre-stamped molds (and even serve themselves from these for their own ends), it’s worth remembering these verses by Bertolt Brecht written in the wake of the popular rebellion (which was crushed) in Berlin, East Germany on June 17, 1953.

After the uprising of the 17th June
The Secretary of the Writer’s Association
Had leaflets distributed in the Stalinallee [boulevard]
Stating that the government
Had lost the confidence of the people
And could win it back only
By redoubled efforts.  Would it not be easier
In that case for the government
to dissolve the people
And elect another?

Currently, a group of people are gathering in Havana to decide on the directions of the nation and to make decisions that will affect the “people in socialism.”  I only hope that the calls to the people are less than the responsibility and respect that they show for their demands and hopes.

One thought on “How Cuba’s People Live Socialism”