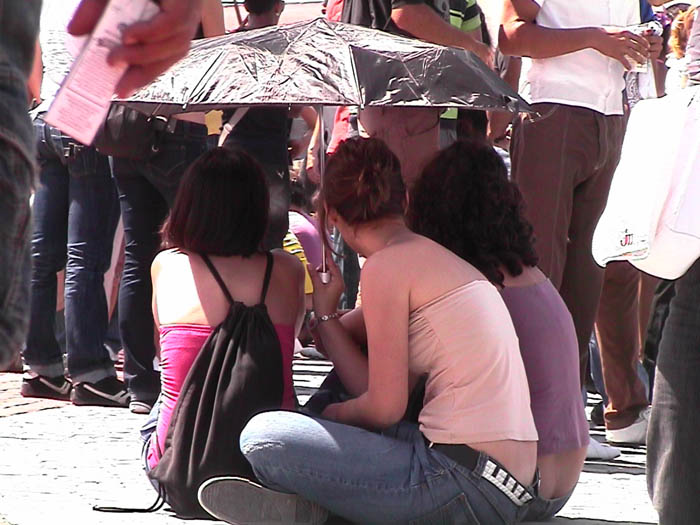 A friend told me that several months ago he had attended a conference in Havana on the topic of “emancipatory paradigms.”  I’m familiar with that forum because several of its facilitators are well known; in addition, a few of my friends and myself were invited to attend it on a couple of occasions.

It is a valuable setting since it allows a chance to dialogue with activists and social movements from all over the world, though their struggles and perspectives are not very well known within the state-centric and liberal matrixes that dominate Cuban society and common sense here.  And I have good memories of my discussions there.

However my friend confided in me his frustration for what he perceived (as did I) as a certain disconnect of the forum from Cuban realities and problems.  He also made some interesting allusions with regard to popular education, sexual identity and community work.  “It seems that emancipation is only needed by others, but that here it’s not necessary since we live in a ‘brave new world,’” he said, sarcastically, alluding to the book by Aldous Huxley.

My friend’s references made me re-think the issue of emancipation.  An outstanding Latin American intellectual elaborated an extensive definition of emancipation that is worthwhile to reference.  He perceives it as “(…) an ideological and historical process of the liberation of political communities or of social groups from dependence, tutelage and domination in the economic, social and cultural spheres.  To become emancipated means freeing oneself from the power exercised by others, while at the same time gaining one’s full civil capacity and citizenship under a democratic government of law.”   All of this is reflected in “the capacity to know and to recognize social and moral norms independently of externally imposed opinions that are erroneously represented as being natural.”1

Involving myself with the issue led me to review several things I had written a few years ago in which I approached the problem from a Cuban perspective.  I re-read a work2 published back during those memorable years in which a group of young colleagues looked to stimulate debate among the left (lethargic amid the Cuban shortages), on the counter-reforms begun in 1996 and the dream-world directions of the “Battle of Ideas” campaign that followed.

The text in question was presented in both of those actions sponsored by an organization whose directive was to promote discussion forums and analyses of situations with some of the best intellectuals from the island.  I remember in one exposition an angry diatribe resulted due to a colleague who assumed the defense of the statist socialism as something personal, generating an impassioned debate.  It seems interesting to throw the central ideas of that “old” text into the ring to see how much it could tell us (or not) about the directions of our reality while tied to the reflections of some ideas expressed in my two previous chronicles.

On that occasion (2004), I defined the central idea of my essay as exploring what would be the challenges of emancipatory thought — from the left, creatively and pluralistically — within present-day Cuba while inserted in the alter-globalizing movement of the 21st century.

I believe that similar questions possess full validity today, given the mixed impact that persisting conditions (state socialism) and mutations (the advance of pro-market reforms) have on some of us left Cubans who still need to define more concrete and more operative proposals in term of the defense of rights, proposals for alternative forms of participation, the expansion of self-management and a position in the face of the market and the state, etc.

These are the major problems of those of us who still must advance consensually generated, radically sustainable and realistic positions that allow for the rescue of socialism as a desirable alternative for the majority of the Cuban population.

If we don’t do this we will only be able to continue debating in closed circuits of communication between a few people “in the know” with high doses of esotericism and little capacity to resonate among a wider public.

What this involves is not taking refuge in “essayism” that lacks real roots or on betting on studies excessively focused that seek to avoid taking macro looks or making social commitments.  Instead, in our context we must apply the proposals for updating the major permanent questions of political philosophy (focused on the forms and ends of a virtuous regime, the objectives and values of justice, their nexuses with common good and the good life) linking them with processes of change and agendas of really existing public policies.

In that work, I insisted on: “The challenges of progressive intellectuals and generally all of the left forces within Cuba are complex because they are inserted in a logic of dual dimensions when having to address the global, strategic and anti-capitalist struggle but from the direct experiences of the national context where to be of left implies a militant confrontation with the dogmatic thought and practice of the bureaucracy.”

I find it unfortunate when forums are held on the island where they speak solely of neoliberal thought based on the commercialization of life and knowledge, and no balance is made (and especially no updating) of the Stalinist legacy that is structured around the other single line of thought still in effect in Cuban institutions and society.

I consider it at least incongruous that those who question the censorship of the capitalist mass media and condemn the aggression against Iraq or genocide committed by transnationals in Africa don’t point out with the same insistence the barring of spaces as well as educational and cultural publications on the island that feature the best in progressive social thought, especially since this means extracting practical consequences from this as a means of transforming our reality.

In another moment of the work I pointed out that: “Cuban emancipatory thought has to respond to the new social challenges incorporating those challenges and emancipatory speeches (those gender-related, cultural, ecological, generational, etc.) that can contribute to the reproduction of the socialist initiative and achieve greater identification and harmony with the experiences of international movements.”

Here I would only have to add, with certain joy, that in recent times we have advanced in that sense with the pluralization of social and virtual initiatives that seek to reintroduce activism and represent silenced identities (environmentalists, gender and sexual orientation-focused, cultural, etc.), without turning to the formulas of “authorized participation” or multi-culturalist and postmodern fragmentation.

The problem lies in the fact that these initiatives continue being seen by the Cuban state as strange or opposing as it continues to penalize their work, something that evidences two things: that the constituted power wants to continue monopolizing the image that it is the sole left possible and desirable in Cuba, and that it will do everything possible to reduce to a minimum those voices and actions that dare to dispute — without requesting its permission — the self-assigned monopoly.

Perhaps these same reasons reorient the “emancipatory paradigms,” focusing them outside the nation’s borders.   Because of that, only persistence, creativity and autonomous and un-negotiable solidarity will make it possible for those ideas that I wrote about then and today to be embodied in “daily politics” and only then can we open a safe harbor before the mercantile and authoritarian tsunami that approaches.

[2] The writing is titled “Pensar la emancipación : una visión desde Cuba,” in Cultura, fe y solidaridad alternativas emancipatorias frente al neoliberalismo, a compilation prepared by myself along with my colleague Gabriel Coderch, and which was published by Editorial Felix Varela in Havana, 2005.