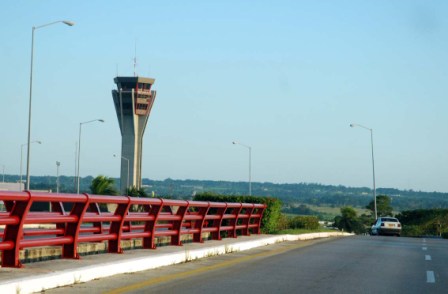 The look of Havana’s Terminal 2 airport is always the same.

Throngs of people pressing up against the security tape – all of them nervous, excited and a little worried.

Almost the same scene is repeated at Terminal 3, but those waiting there — where most international flights that aren’t from Miami come in — are a little more comfortable.

Arriving at Terminal 2 are flights from Miami (and a few other locations). Almost daily a considerable number of Cubans return to visit their country and their families.

The encounters are intense, with plenty of tears.

The only commentary that would fit in a caption for these events would read “Pain masked with smiles.”

Yet upon their return to see their loved ones after a year or even ten years of absence, there’s still one remaining obstacle to overcome: the blessed customs regulations.

Perhaps because the economic situation here is increasingly tense and start-ups of many private businesses rely on not only monetary support from those who live abroad, Cuba’s Customs Authority has circulated a document entitled “Normas” (Standards).

Though the language is excessively technical and boring — perhaps to purposely keep people from reading it — I was able to struggle through it.

Still, I didn’t find anything new. It remains the policy for running through the wringer all those Cubans who live in other places. For example:

– Those who enter Cuba must carry with them and conduct their affairs with their Cuban passport, even if they’re naturalized elsewhere.

– Despite living outside the country, those people who haven’t obtained new residency will have to be subjected to a greater number of payments to the Cuban government for not having the status of tourist.

– They will have to continue submitting lists of home appliances that they wish to bring into the country and pay a fee almost equal to the purchase price of these abroad.

– Charges of 10 CUC per kg. (about $5 per pound) will be imposed on luggage with contents not for personal use.

And the process that ensures compliance with these regulations can last even longer than the plane ride.

Because of all this, it’s almost impossible for those who have to deal with Customs officials to not end up evidencing anger in their eyes, muttering expletives or suffering the effects of high blood pressure.

From one person these officials will take a jar of instant coffee, and they’ll strip another traveler of their supposedly “contraband” chocolate bars. Yet those are the best-case scenarios since some people have to pay astronomical sums to bring clothes into the country for their family.

These “Standards” rub in our faces two interesting offenses: “Resistance” and “Contempt” – which mean: “If we rip you off, shut the hell up and don’t protest.”

Finally, they suggest that any complaints or charges be registered with the customs authority itself, and not to offer gifts to officials in exchange for their services.

This is well-intentioned advice but difficult to comply with by those who know that on the other side of the door their loved ones have been waiting for hours.