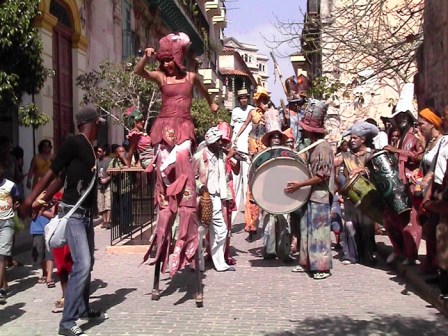 Anyone who has taken an afternoon to visit the parks or squares of colonial Havana — such as Plaza de Armas, Guayasamin Park or Plaza Vieja — will have invariably come upon an astonishing sight: The Giganterias (theatrical group on stilts).

Even people who are not easily amazed will describe the spectacle as cheerful and light-hearted.

As for me, I was surprised when I stumbled on them reveling through the cobblestoned passageways with such a racket that it was impossible not to notice them.

Giganterias is a group that revolves around four figures on stilts (two women and two men) with dazzling drawings on their faces.

Accompanying them is a group of six musicians playing snare and bass drums, Chinese trumpets and tambourines.

The procession is rounded off by a clown dressed in an outrageously colorful suit and a blue dwarf with a huge hat with two points.

I found myself surrounded by a throng of uniformed children from an East Havana elementary school.

There was no way for the kids to resist the temptation to ignore their teachers and run behind the giants who sang the songs the children requested and that the musicians played.

The parade and singing were interrupted only by brief theatrical renditions and joke telling, while one could see in the children’s faces the joy of their experiencing something truly unusual.

Not only did the children have a good time, but the adults too.  The artists took advantage of every step, beating drums used for loading gravel for street repairs in Old Havana, and they even made some of the police break out laughing.

Others who enjoyed the spectacle were tourists, who took pictures of the performers and dropped change in the hat passed around by the artists.  That “hat,” actually a black bag decorated with silver stars, was circulated by the blue dwarf.

For what I could find out, this is how the Giganterias have made their living for the past ten years; and from what the dwarf told me, they’re survived this way without any governmental support.

I was truly happy for them, because through their work they can both earn a living and make people smile.

But since I couldn’t get out of my mind the hundreds of thousands of workers who will also have to survive imminent layoffs, I’m hoping that many such groups will emerge.

With luck they’ll find tourism as a source of livelihood, but then they’ll have to struggle to see which group is capable of attracting the most money from the pockets of foreigners.

This will mean the loss of much of the artistry and delight, and will lead to competition in which many will fail and a few will survive.