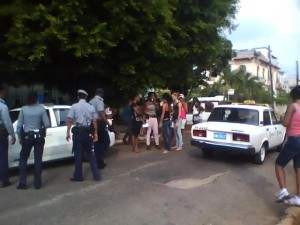 She screamed: “Come on! I’m telling you to come on! Come on and stab me here!”

I didn’t understand anything.

The screams, a mixture of hysteria and powerlessness, paralyzed me there where I stood.

I suddenly froze when seeing her bare breasts and her blouse thrown down on the pavement.

Those breasts now identified her as a woman though contradicting “her” genitals hidden in her pants.

All of this took place at the corner where CENESEX (the National Center for Sex Education) is located.

I immediately remembered that only a few weeks earlier, people had celebrated the annual Campaign Against Homophobia, promoted by that center and its director, Mariela Castro (the daughter of the current Cuban president).

Included in those activities was a march (with a conga line and everything) that was held on May 14 with the participation of a considerable number of gays, lesbians and transsexuals. 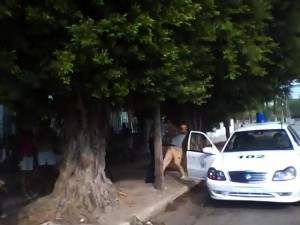 But what I had just seen there on the corner was different. A group of “trannys” [transgendered people] had become upset and afraid. They were there talking about a knife and someone was calling the police.

The young guy, who the semi-nude tranny was screaming at, left running before the imminent arrival of a patrol car.

On the scene in moments, the police officers (and the crowd) chased him all the way to the door of his house, just a few blocks away.

It was then that I could see the knife he was holding. The blade was more than 4 inches long – immense and ominous.

The police officers got it away from him but the guy escaped in search of a stone to throw at the “tranny” as he shouted, “See, see what you started, see what you’re started!”

It was then that an arm around his neck made him stop. The police pushed him until he fell on the ground, then they handcuffed him.

The tranny was screaming that she didn’t want to get into the same patrol car with her attacker, while demanding that they call another car for her.

Then one of the police officers, who was more annoyed than satisfied with having done his job, yelled at the tranny to be quiet.

The exact phrase he used was: “Shut up man!” 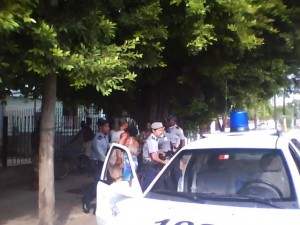 When speaking with one of his fellow officers, he looked at the tranny and ordered: “Handcuff him too.”

The policeman was openly disrespectful to the person who just a few moments earlier had been in serious danger.

He then took charge of distilling his own dose of homophobia and violence. In a lower tone he said: “You can’t do anything to these people. If you do, you’ll get hammered from above.”

One might say that this was a story with a happy ending, and it almost would have been if it weren’t for all the other streets in this city where there are hundreds of homophobic and violent people willing to pull knives on those who are different.

One thought on “Homophobic on a Havana Street”