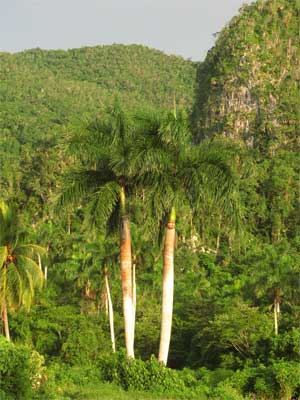 I waited for the truck that would take me to Pinar del Rio Province for the first time and for my first time camping.

I finally climbed on up, and — seated on one of the planks that attempted to simulate seats — I nibbled on a few peanuts that I had. The truck wasn’t filled, so we just sat there waiting some more.

Finally, when there wasn’t room for a single additional person to squeeze in, the driver cranked up the engine.

The trip was long, and not enjoyable. I went from eating the peanuts to crackers, with my butt so numb that I had to contain myself from asking the driver to stop, getting out and heading back to Havana on foot.

Still, I didn’t lose sight of the fact that this truck — which traveled for three hours to get to its destination — only cost 20 pesos (about $.80 USD), making it one of the cheapest alternatives.

Finally in Pinar, I found myself together with my other three comrades (Eddy, Alberto and Sandrine), all of us trying to catch a lift to the remote site where we planned to camp.

But still there were problems. First the taxi drivers hounded us and then they tried to cheat us; paying 15 CUCs (about $16 USD) to get to La Peña (a campesino town) definitely wasn’t in our plans, nor was it compatible with our budget.

We finally found another private truck to make the journey.

This time the trip was different. Surprisingly it was almost comfortable.

I saw a little of the provincial capital and after about a half an hour we were in the mountains.

While traveling uphill on the narrow highway, the truck kept blowing its horn to prevent an accident, while the ride allowed me to delight in the landscape.

The mountains of Pinar have an incredible variety of vegetation. The pines and the palm trees are plentiful, miles and miles of these trees cover the extensive mountain range.

I was captivated. The five hours of travel had been compensated for even before we began camping.

We finally got there, or almost. First we had a little something to eat before beginning our trek into the woods.

We escaped a downpour in the workshop of a campesino family, who were extremely hospitable and friendly, and we then continued our march.

We crossed a swollen creek, only to slide through mud and into a rice paddy on the other side.

Well, I should add that I also slipped on the trunk of the palm tree that we used as a bridge to get over the creek.

We were able to get our tents up after a good while, but we weren’t able to get the campfire going, so we fixed some simple mincemeat sandwiches. But nor could we bathe because the river was gushing at a monstrous speed.

Only the sky and the stars (impossible to see in the city) made us feel better.

The following day we found a stream, we went into a cave (which was the source of the creek), and I got stung by a bee for the first time.

We were finally able to start a fire, so we made spaghetti, but rain ended up getting everything wet, even the insides of the tents.

Going back was easier, though I continued sliding and falling and almost died of fright when I had to cross that same palm tree bridge from the previous day. Without the river being at its height it was about two yards over the water.

We made it back to the truck stop and Sandrine remembered that she was French; she paid for our taxi ride back to Havana, 20 CUCs.

If anyone asked me if I would go there again, I’d have to say yes. I’m not masochistic, but the landscapes and the people of Pinar more than make up for the difficulties.

One thought on “In the Mountains of Cuba”