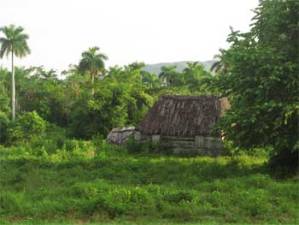 In my previous entry I tried to describe my adventures on a trip that I just took in the countryside of Pinar del Rio Province.

This time I’d like to talk about a village there called La Peña, as well as its people, its scarcities and how life changed in that little town.

La Peña (literally “a crag”) is on one side of La Macagua in the Minas municipality, more or less an hour and a half on foot from the highway. It owes its name to the shapes of the nearby limestone outcrops that jut out of the earth.

Its people’s skin is hardened by their work out in the sun, and they are not bothered by the mosquitos.

The only person who I saw wearing shoes was a three-year-old boy, though I don’t know if it was because the family was having visitors or if this was to protect the child’s feet.

To make a living people plow the fields using oxen. They grow corn, malanga, sweet potatoes, yucca, tobacco or anything else that will grow in those fields, which are watered only by the rain that falls from the sky. 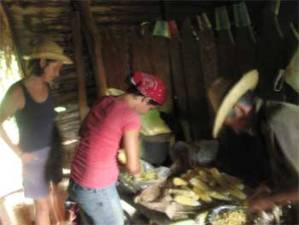 The favorite form of entertainment among men in La Peña is organized cockfights, as well as sitting around telling stories at nights, stories that on occasion are a bit exaggerated.

Any visitor generates curiosity and is always attended to with courtesy and care.

The guajiros (campesinos) who I talked to told me that a couple of years ago some young men came to visit Emilio, a La Peña resident.

They also told me that back then all the houses were made out of wood or were simple bohios (thatch-covered huts) that had been erected by their inhabitants themselves, though the structures didn’t have electricity.

As it turned out, the visit by those fellows changed the village’s luck.

According to what one guajiro told me — though he asked me not to mention his name — the young guys made a documentary about life in such places and were able to get it aired on local television. 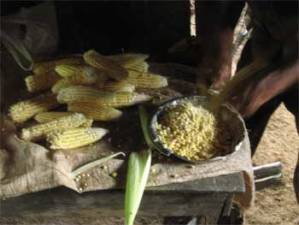 The documentary caused such a commotion that the delegate to the National Assembly Iraida Hernandez Machin negotiated the necessary resources to construct masonry houses for the people of La Peña. She argued — like Fidel once said, I thought — “Revoluton is building.”

An electric generating plant was also brought in, allowing people to start watching television in their homes at night. Starting at that moment, life there changed because — like Lenin said, I think — “Socialism is electrification.”

We can take Lenin and Fidel as not very rigorous theoreticians, or we assume that until a couple of years ago the revolution hadn’t reached those places.

But things didn’t end there.

They described to me how the National Assembly delegate took reprisals against Emilio for helping out the documentary makers.

He was the only person who didn’t get a masonry house. What’s more, the delegate warned all the residents that if anything like that were to happen again, she would take the “appropriate measures.”

Though Emilio is a party member, he decided not to raise the injustice with the authorities.

But Emilio was not the only one affected. There was also a woman who was suffering from cancer (a resident of nearby Pons) who didn’t get a new home. She was denied a masonry home though she lived only with her blind father and a small boy, and despite the fact that her house had been hard hit by a recent spate of hurricanes – it rained more inside the home than outside. 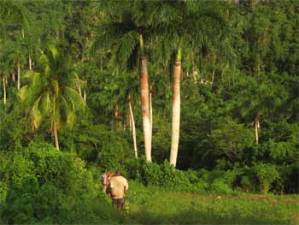 This sick woman doesn’t have a roof, but the campesinos say that the delegate’s relatives have been able to get new homes. The official even authorized her family members to take quality properties that had been owned by people who legally emigrated from the country.

My friends, those decisions obviously aren’t being made from below, and there are still many questions to answer:

Was it a crime of to make a documentary about La Peña, where life was depicted exactly as it was in that village?

Is anyone entitled to intimidate and punish those like Emilio who speak of their problems and daily life?

Is this delegate there to benefit from her position or is she supposed to be putting into practice the policies of the National Assembly?

How long will the already long list of the silently dispossessed continue to exist?

One thought on “The Village of “La Peña””