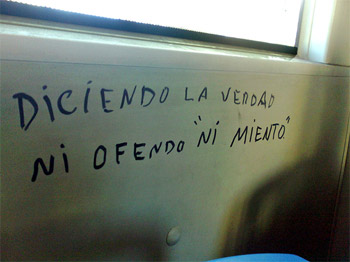 HAVANA TIMES, March11— This is an attempt to give a kick — perhaps still too timidly — against the wall of silence (or grief) that has been erected here. It’s aimed to strike back against our obligatory, necessary, wise, imposed or self-enforced silences.

I have ceased typing so many times, perhaps the most important ones, but on this occasion I’ve managed to pry a brick out of the wall; breaking up, at least a little, its rose-colored uniformity.

I remained silent when during my fourth year in college, a dean and several leaders of the Federation of University Students (FEU) tried to expel me from the university for writing in this blog.

For daring to speak out against the weaknesses of many mass organizations “at the inappropriate time and place,” I was accused in 2009 of “giving weapons to the enemy.”

They paid little notice to the fact that my statements were clearly anti-capitalist.

I remained silent when after a long marathon of meetings they were able to kick me out of the FEU.

I remained silent when — with my radiochemistry degree in hand — they assigned me to an office of the Ministry of Science (CITMA) where I would only be allowed to do secretarial chores.

I remained silent when, after getting two letters from directors of research centers to work for them, I was informed a week later that my services were no longer needed by them.

I remained silent when after working for six months, the Ministry of Sciences informed me that because of my “characteristics” I wasn’t trustworthy to work in places where research was being carried out.

Those instances are part of a long list that has many connotations.

This past March 6, I was called into a surprise meeting where it didn’t take me long to figure out that it was related with some of my inappropriate behavior.

I had committed a “serious indiscipline” and was accused of having violated two resolutions and four articles (subsections included) of the many disciplinary regulations that workers on this island are required to obey.

Thanks only to the “kind heartedness” of management and the union apparatus, they weren’t going to fire me from my job or demote me, which are the measures to which I was vulnerable.

Instead, they subjected me to a public reprimand: a letter that would go in my permanent file, which I ended up calmly signing.

It said that I had been a very irresponsible in having committed the great sins of using a proxy to visit websites that “shouldn’t be viewed” [by Cuban workers] and for uploading information.

They also referred to a comment I had made saying that I didn’t have the mind set for joining the ranks of the Ministry of the Interior (MININT, responsible for domestic security).

There was no agency of employment justice that could save me.

What could I tell them?…that I find existing computer regulations — which I wound up violating — to be exceedingly unjust? Of course not. It’s better that I say such things to you, the readers.

The mechanisms of computer security established in most workplaces in the country [such as blocked websites], along with the prohibitive prices of the Internet in hotels (of $6 to $8 per hour – almost half my monthly salary), work to effectively prohibit access to the World Wide Web.

This is a mechanism that favors sycophantic toads while punishing people interested in understanding the reality of Cuba. How curious.

It is a joke, and a bad one, to argue that since the government pays for the Internet it´s therefore appropriate for me to be prevented from getting online to investigate my own personal concerns.

The Internet that exists in Cuba is in fact paid for by people who work and who provide the state with all of its resources. The Internet is therefore paid for by me, my husband and my family.

By receiving a month salary of only 335 pesos ($17 USD), the right to inform myself or provide information has been pulled out from under me.

How much longer do we have to take this?

6 thoughts on “This Cuban Woman and Her Online Indiscipline”