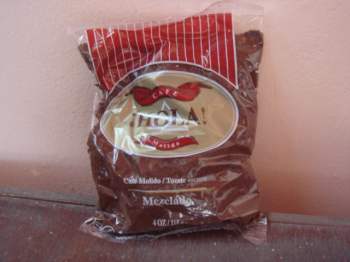 Among certain people there’s such a need for this eye-opener that their having to go only one day without drinking it produces headaches, anxiety, irritability, and sleepiness, among other symptoms. That’s why when there is a shortage of coffee at the bodega (the neighborhood store of rationed products), a fundamental worry emerges about how to get some, even if it means buying an overpriced package from someone on the street.

This month was a difficult one in that sense. The Granma newspaper issued a government notice announcing the fact that due to the price of coffee having increased on the international market, the country was obligated to reduce its imports. At the same time, the paper said that an initiative was being taken to blend ground dried-peas into rationed coffee and drop the price of this hybrid from five pesos to four pesos per packet while maintaining the same per capita amount rationed for everyone over seven year old.

Finally, and with the grace of God, we didn’t have to wait too long for access to the now famous four-peso packets of “Coffee with Peas.” What’s curious about all this is that I can testify that on the block where my grandmother lives, four coffeepots exploded in less than a week.

“Specialists” say that pea grounds swell when they get too hot, clogging the screw on espresso makers used in Cuba. Since the boiling water then has nowhere to escape, the pressure builds up until the appliance blows up.

Since Cubans fortunately don’t take anything too seriously, I had to laugh when a friend suggested that perhaps this was an underhanded form of national terrorism.

I don’t believe that’s the idea, though it’s pretty funny. What I wonder is why a country that possesses such fertile soil and is endowed with a capacity to grow any crop, and is a nation that used to produce coffee without a lot of complications, now has to resort to such desperate measures to guarantee people this necessary stimulant.

Danae Suarez has 26 posts and counting. See all posts by Danae Suarez

2 thoughts on “Blended Coffee: A New Form of Terrorism”