The current problem of the lack of medicine in the country is reaching alarming levels, and it’s already gone past that point for medicines required for special illnesses.

A good while back I started getting worried about the possibility of the unavailability of medicines such as metformin (which is indispensable for the lives of diabetics), or even worse: shortages of insulin, which is in low supply at the city’s pharmacies.

The issue touches me close to home because my father — in addition to his diabetes, hypertension and coronary deficiencies — several months ago went through a stressful situation in which it was impossible for him to get ahold of isosorbide dinitrate.  For people suffering from heart conditions this is another indispensable medicine that if not taken can put their lives in danger.

On that occasion a true act of magic pulled him out of danger (a relative who lives abroad sent some to him).  What’s more, he had to turn to that same wizardry a second time to come out on top of his latest difficulty.

But what becomes of people who can’t count on such acts of providence?  That was my first question at that time.  A friend consoled me saying that in his neighborhood a person frequently comes by selling these same medicines for only 10 pesos a “strip,” of ten tablets.  Once again I understood that, along with everything else, Cubans are forced to come up with their own personal emergency plans, even if these aren’t always legal.

This issue of the shortages of medicines that are vital for people’s lives is truly alarming, but in my opinion the matter hit its peak a few weeks ago. 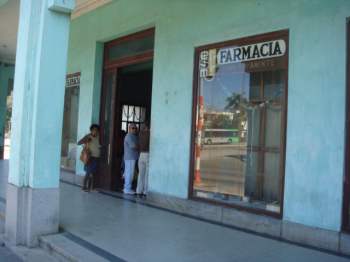 I ended up throwing my hands in the air when I came face to face with the country’s inefficiency in responding to the demand for such common medicines like dipyrone, paracetamol, ibuprofen and even aspirin, medicines that serve to alleviate — among other maladies — the frequent headaches that I’m sure many Cubans suffer.

I don’t have enough information to say if the problem stems from a lack of financial resources to import the active ingredients of these medicines or if the country’s internal negligence is the cause of these deficiencies.

It would be naive to once again ask for answers.  All I can say is that in the meantime I’ve now planted a little garden in my backyard.  In it is a linden bush, sage and some other home remedies once used by the early inhabitants of the island in the epoch of the “Bateyes” [company towns that served the sugar industry].

One thought on “Dealing with a Headache”