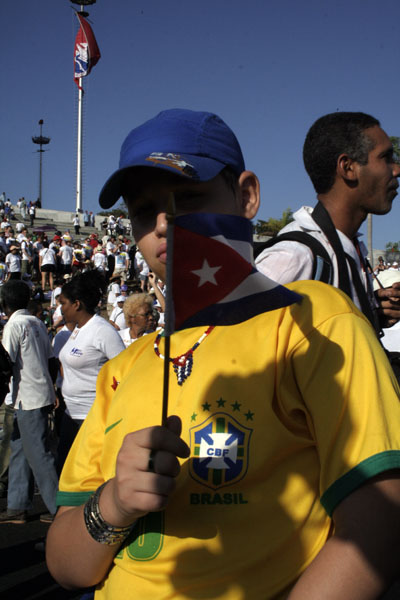 Due to the sad and well-known problem of access to the Internet here on the island, it’s extremely difficult to get online frequently.   For that reason I’m unable to read the comments on my writings and then respond to them as quickly as I would like.  However, I believe it’s never too late to reply to those who send in their remarks.

In relation to my post March of the Masses, one person named Noel Perez (who commented on the Spanish version  http://havanatimes.org/sp/?p=16145) compelled me to respond “very rhetorically” (to use his words), so I’m returning to that issue.

This person differs with me in terms of the true sentiments held by people when participating in the annual May Day parade.  I should say that I consider his position extraordinary, and I also extend him my applause for his enthusiastic expression of “…sincere pride and happiness, like that of children, to be in the front ranks of this group of workers” – to quote his exact words.

It’s comforting to know firsthand that we still have people who are moved by core beliefs and reflect them in what they say and do, and that don’t respond out of the now-so-common sense of merely covering one’s back and staying out of trouble.

He added, “The omniscient character of her words amaze me” when making them “representative of the thinking of those who attended…but that at least didn’t take into account me or my comrades.”

That was well said.  I limited my report only to the points of view and opinions of many people with whom I agree and my own.  I don’t remember having said at any moment that there was general consensus.  I was speaking of the majority, not of the entirety.

In no way was I trying to be absolute, and I do indeed believe that there are those who still march out of their attachment to an ideology, which to give up or to reformulate at this point would mean sheer pandemonium for them.  How can such people deny what they’ve supported for so many years?  Indeed, I admire and respect this fidelity of Noel and his comrades.

However, he delivered a riposte at the end of his comment when he wrote: “But any way, there are those who need to write, and that which is stained always reads better than the immaculate tones of the grays.”

I write as an exercise and I always uphold the truth.

What makes him think that I promote the tinged and not the unblemished?

It was you and not me who spoke of “the immaculateness of the grays.” And that the march of the masses was a “procession of grays.”  It’s been a while since things here stopped being black and white.  From your perspective there wasn’t anything black there, but not all present was white – if you allow me to flirt with your poetics.

To me, it was a parade of grays, with lesser and stronger tones.  But among the grays there were clearly well-defined ones like you, shouting slogans because they still believe in them.  But let’s do the honor to the unquestionable existence of those who were less crystalline and conscious.

If I had held an opinion like yours, I assure you I would have reflected it in my writing, but none of that crossed my path, I only saw dark grays.