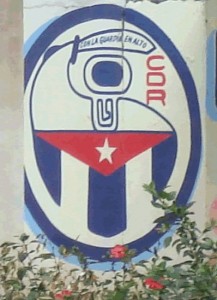 “Listen, don’t come complaining afterwards.  Just wait until you need a reference from me…,” shouted a woman to another in a threatening tone while they were in line to go into the ice cream parlor.

Defending herself, the woman in line explained: “I’m so sorry.   It’s just that between one thing and the other — work, the house, the boys, meetings as well as the bills — I don’t have any time and I’m always forgetting about my darn dues.  Tomorrow I’ll bring them to you without fail.”

When she left, the other one continued to complain about her to those still in the exhausting line.

“She’s like that wherever you see her.  She just got back from Venezuela and because she brought back some appliances and crap, she thinks she’s the big wig of the neighborhood.  But I’m the one who takes care of the finances for the CDR [the neighborhood Committee for the Defense of the Revolution] so I have to chase behind her so that she pays her little two cents.  As soon as it’s necessary to give my evaluation of her, about her attitude, I’m going to cut her off at the knees.  If anyone asks me, that woman’s not traveling again ever!”

I felt terribly upset.  There shouldn’t exist behavior as petty and repugnant as talking about other people behind their backs – especially from this woman, who says she’s an executive member of the CDR (the largest existing organization in the country since it “represents the masses”).

The truth is though that its structures have been designed to control and sniff into the private lives of its members.  Also, people know that membership is “completely voluntary,” but because of some mechanism that no one can explain, everyone ends up being a member of the CDR.

To be a part of this organization one must:

– pay monthly dues (which are next to nothing, by the way)

– maintain a positive attitude that translates into good human and social relationships with one’s neighbors (which is nothing other than gossiping, back stabbing and other demonstrations of mudslinging).

In the end, if you fulfill these requirements to the letter, you’ll be recognized as an outstanding cederista (CDR member), for which you’ll be presented with the most garish certificates.

Though you might make an effort to be seen positively in this light, if your profession or family situation allows you certain material comforts, you won’t be able to escape stirring up hostile feelings toward yourself.

Any comrade who this rubs the wrong way can use their status as an executive member of the noble organization to circulate an unfavorable evaluation of you to the government and affect your possibility of obtaining incentives such as household appliances or the ability to travel, even if it’s only Venezuela for work.

As one can see, the CDR praises cooperation as well as friendship, which at times can be a dangerous friendship.