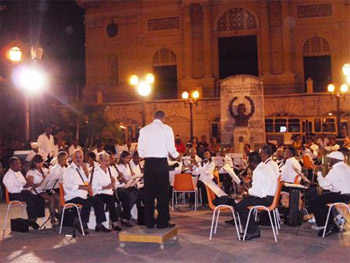 HAVANA TIMES, Feb 14 — As children, when my brother and I went for a walk with our mother, we would always ask her to take us to the park where the “little” orchestra played. Our innocence was such that’s what we called the “Municipal Band,” which performed on Saturday and Sunday afternoons there at Cespedes Park.

Now, as an adult, I often go to that old park and hope to hear the “Angelus de la Catedral” ensemble, the group that starts off the Saturday and Sunday open-air concerts that are still held there.

Once at the park, I’ll remember how my mother used to tell us that this small concert was a custom inherited from the military bands that used to present them in plazas and public places for the entertainment of the city’s residents.

People would always come out for those evening and nighttime outings. She also said that these performances would occur on special occasions, such as for the celebration of an important historical date.

In this way we would always enjoy the musicians, who would form a semicircle with the conductor on a small platform in the center stage. Clarinets, flutes, oboes, horns, piccolos, bassoons and saxophones would combine with the sounds of tubas, trumpets and trombones, which all seemed to get ahead of or lag behind the beat of the ostentatious echoes of the pulsing drums and cymbals.

This delicate blend of families of wind and percussion instruments would play some of the most brilliant pieces from the national and universal repertoires. Listening to any of their classical works — or danzon or contradanza symphonies, very much in the Cuban creole style — would invariably compel some nostalgic older couple to get up and dance. 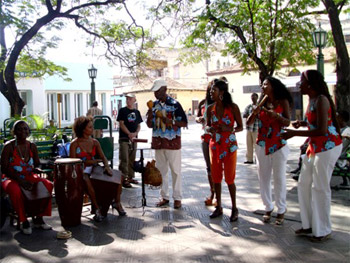 But not only did these orchestras bring the public out to the park, other groups that played different musical styles would also attract passersby and interact with them by inviting them to move to the beat of rumba or guaguanco.

This other aspect of our polychromatic culture — acquired from our African ancestors, but also having elements of Spanish “bulerias” (traditional Andalusian song and dance) — continues to be played by beating cajones (boxes) and drums that are accompanied by a host of instruments endemic to the island. Their highly original dances reveal our unique form of machismo, as males appear to subject the females to their will.

The temptation to move one’s feet is irresistible, as is trying to contain one’s laughter when a tourist is unable to coordinate their movements to the beat.

On weekend afternoons the streets of my city are filled with sounds, whether those of the open-air classical concerts or those of the rumba musicians and dancers. Each person can listen to the rhythms of their choice. I like both. For a while, they allow my compatriots and me to forget about our problems and enjoy our afternoons and evenings – by the force of tradition.

2 thoughts on “Santiago de Cuba: A City of Tradition”